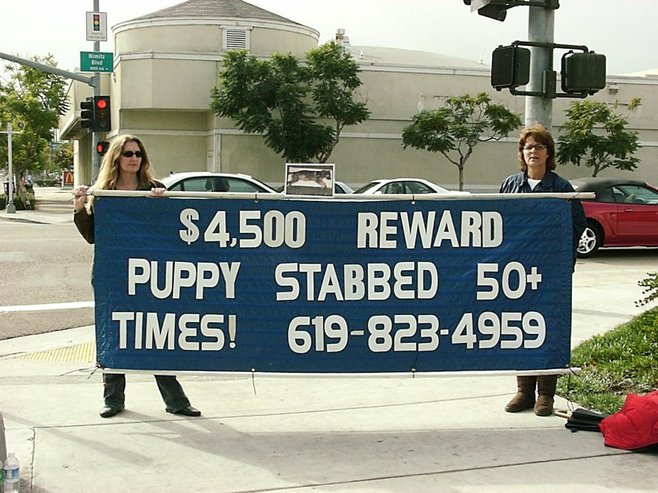 Members of the San Diego Animal Advocates on December 15 continued their demonstration on the corner of Nimitz Boulevard and Rosecrans Street in search of a dog killer who attacked in the vicinity early morning December 11. The victim, a nine-month old male German Shepherd, was stabbed over fifty times in the abdomen, chest, and throat.

The County of San Diego department of animal services is searching for information leading to the assailant who would likely have been marked with blood, dog hair, scratches, and/or bites.

As the San Diego Animal Advocates continued their demonstration, they received another $500 donation to add to their contribution of the reward offered for any information leading to the arrest and conviction of the killer. The total reward offered now is $5000 with $3,500 contributed by the San Diego Animal Advocates and $1,500 by In Defense of Animals.

I hope and pray they catch this scumbag dirtball.

Why would anyone hurt a puppy???? I second surfpuppy619!!

Must be mentally ill. I hope they catch the sicko!

Criminals have plenty of constitutional protections but not one blessed constitutional duty to do good to others, whether the victims are pets or people. Speaking from experience, federal victims rights laws are relatively toothless in this regard.

There has been a group of homeless men that have congregated on that corner for the last couple years. I drove by them everyday on my way to work. They would sit on the bench at the 76 station across from the old Vons and take turns panhandling in the island that separated Nimitz. I wonder if they are still there. Last time I drove by a couple of weeks ago they were. It might be a good idea to see if they are there, and if so, question them to see if they saw or know anything.