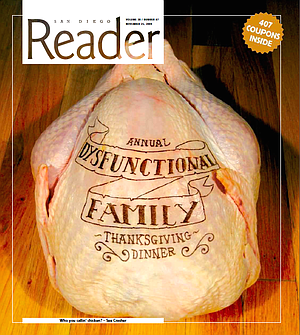 A few months ago, my gardener (unaware of my ancestry) casually said, “Mexico City has too many Jews.” “What’s wrong with Jews?” I asked. “They’re all rich and stingy.” I thought of my grandparents.

When they emigrated to New York, they were even poorer than they’d been in Moscow, albeit safer. Joseph and Gussie made their living renting sidewalk space in front of a delicatessen, where, roofless, they sold pickles in the summer heat, the frigid rains, the winter snows. Gussie got pregnant at least 11 times; five children survived, including four daughters — none of whom could cook worth a damn.

Gussie didn’t have enough mothering to learn how to cook, and neither did her daughters. The Cossacks burned down her shtetl (rural Jewish village), killing the men and older women, raping the younger women and girls. Orphaned at 11, Gussie made her way to Moscow and found a job as a housecleaner for a Christian family. Joseph met and married her when she was 15, enraptured by her long auburn hair and flashing eyes. When their first child, my Aunt Irma, was an infant, they emigrated to New York. Later, Gussie taught Irma some rudimentary cooking (pot roast, chicken soup, roast chicken for holiday feasts). Irma raised her little sisters and taught them what she’d learned of cooking.

Eventually, all the kids scrabbled their way up to the lower middle class. Both grandparents died young, when I was a toddler. I mainly know Grandma Gussie through old black-and-white photos and a few vague memories — her lifting me up and gutturally singing, “Ich hab ah shaine, klaine maidele…” (“I have a pretty little girl”). She scared me. She looked like a witch. She spent more time with my red-haired cousin Marilyn, three months older. (Grandpa Joe made up the difference. Before he died, two months after Gussie, he taught me the alphabet. I was three years, two months old at his death.)

The dead grandparents were Orthodox, their kids secular Jews. Holidays were mainly ritual occasions for the family to get together, not to celebrate anything special beyond the existence of a holiday. Childhood Thanksgivings, like other family dinners, were ordeals. The cooking was marginal — overdone turkey, no stuffing or gravy. The hot-headed Russian Jews were filled with roiling angers that emerged on holidays. Over store-bought dessert, the grownups would start squabbling, and my cousins and I would make ourselves scarce. The last Thanksgiving at my mother’s house, I was 14 and starting to hang out in Greenwich Village. While our relatives argued fiercely about whether or not I was still a virgin, Cousin Marilyn and I snuck off to the bathroom to practice age-appropriate sinning, sharing a cigarette I’d stolen from Aunt Irma’s purse.

TRIUMPH: WHY I’M NOT A CHEF

I taught myself to cook because I’d tasted good food in New York restaurants and wanted to eat like that at home. I craved international variety. I’d cook Szechuanese one night, Peruvian the next, Italian, French, Mexican… After my husband and I moved to San Francisco, as my skills and self-confidence improved, we often threw dinner parties. Almost all our friends were born somewhere else and had no local family, so eventually I began cooking a venturesome series of “orphans’ Thanksgivings,” each year with a different ethnic slant.

No mistake, I had become a competitive cook, ego-involved in culinary dazzlement. On our final orphans’ Thanksgiving, the guest list included someone I was starting to hate — a pretty young thing with huge gazongas, whom I’ll call Abbie. Some of our friends called her “the Groupie” because — lacking any intellectual or creative firepower herself — she threw herself at all the guys in the Bay Area film/food/folk-music cultural mafia. My ex-husband-to-be, not immune to flirtatious gazongas, invited her to Thanksgiving. A temp catering assistant, her contribution to the feast was a “healthy” canned-pumpkin pie in a cardboardy whole-wheat crust made with Wesson oil in lieu of butter. My dessert was an airy blackberry mousse. “How did you get this so smooth?” asked Abbie. “Well, first you purée blackberries in the Cuisi, and then push them through a fine-mesh sieve,” I began. “Oh, wow, that’s too much work,” she answered. (Her catering career was short-lived.)

A greater triumph came post-dessert. Another friend owned a major folk-music record business, headquartered in El Cerrito (north of Berkeley), where the local restaurants were mainly icky chains. Chris had been a frequent dinner guest over the years. “I would like to finance you to open a restaurant near my office,” he said over coffee. “All I want is for you to cook a few of your good peasant dishes every day, nothing fancy.” I thought about it. I looked back to the previous day, hand-whipping 12 pounds of yam flesh with butter, cream, and brown sugar (amended on T-Day with whipped egg whites, then baked to a pouf). My arms were still aching. “No, Chris,” I finally said. “I love cooking, but I don’t know anything about running a restaurant — and especially, I don’t want to stand over a hot stove 15 hours a day. I’m a writer, not a chef.”

Twelve years later: My secret trick for roasting turkey was the brown bag method. You rub the turkey all over with seasonings and softened butter, slide it into a big brown paper grocery bag (atop a rack), and place it in a cold oven. Then you turn the oven on to 500 degrees. An hour later turn it down to 400. Another hour, down to 300. One hour more — done, regardless of the turkey’s size.

It always worked until I had to cook Thanksgiving for my new in-laws. Now I was living with TJ, who’d invited his grown son’s family, complete with a passel of grandkids, to come up from Southern California for Thanksgiving dinner.

Coming from a family even more dysfunctional than mine, TJ routinely got sick for the holidays — from

T-Day to New Year’s. He managed to hang on long enough to do the shopping with me three days before T-Day, then took to bed like a Victorian invalid, fortified by many packs of Coors Light. The cooking fell to me — including alien gringo foodstuffs sacred to his family traditions (e.g., celery stalks filled with fake cheddar from a tube). Gary, Tina, and the kids were staying at a beachside motel a couple of miles from our flat. I advised them to enjoy the wonders of the beach and Golden Gate Park and show up at the house around 4:00 or 5:00 p.m.; I planned to serve dinner at 7:00.

They showed up shortly after noon. Suddenly, I had three strange kiddies calling me Granny and wanting to play with me. And no food ready yet, and TJ barely awake, not up for leading any hikes in the park.

At 3:30, I should have put the brown-bagged turkey in the oven and then turned on the heat. Surrounded by my portmanteau grandkids, I turned on the oven — and then they distracted me. At 3:50, I finally got the turkey into the oven. Remember Ray Bradbury’s Fahrenheit 451? That’s the temperature at which paper burns. At 4:30, I smelled something funny and opened the oven door. The bag was aflame; so was the turkey and butter grease that had seeped out through it. TJ and Gary grabbed the kitchen fire extinguisher and sprayed foam all over the oven, including the bird, which pasted the burnt brown bag onto the turkey skin.

Dinner was done an hour later than planned, the turkey finished off conventionally. I gave thanks that the yams, mash, stuffing, and veggies were all fine. And under the ruined skin, the turkey meat was marginally edible — really no worse than my mom’s. After dinner, Gary pulled out his new camera and went at it. TJ was camera-shy, as I am, but Gary caught us on the couch, grandkids crawling all over us like a litter of kittens. A few months later, he sent us a copy. In life, I look and act more like my father’s soft-spoken, snarky Polish-Jewish side, but there I was, mahogany-brown hair piled atop my head for comfort while cooking, dark eyes aslant in a grin lifted high by a shelf of prominent Slavic cheekbones — echoing a face mainly remembered through a few old black-and-white photos. Ninety years after my mother’s parents arrived in America, it was Grandma Gussie’s American granddaughter.