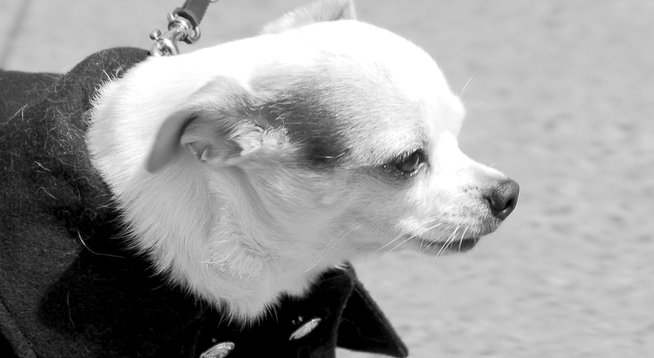 We moved to Tierrasanta from the heart of El Cajon. The townhome we rented in East County was three blocks away from the liquor-store double homicide that happened a few years back. Police helicopters were known to circle above while my kids played ­outside.

Tierrasanta was a big change. There were no colorful homeless folks shouting obscenities at us; I ­didn’t have to worry about getting my ass kicked at the grocery store if I accidentally bumped my door into the car next to me. I kind of missed the near-daily sightings of Barbie man, the dude that bikes around El Cajon with hundreds of naked Barbies affixed to his ride. My new beauty salon smells like lilac and offers spa treatments, as opposed to the one in El Cajon that has the aroma of a wet dog and is situated between two gun ­shops.

My kids think Tierrasanta is peaceful. They ­don’t mean peaceful in a good way. ­“It’s so quiet here!” they ­grumble.

People are always running or riding bicycles. They walk their tiny suburban dogs on designer leashes and actually pick up the poop. In El Cajon our townhome drama was over whose kid started the lice epidemic. In Tierrasanta the moms gossip over which parents allow their children to have high-fructose corn ­syrup.

Whenever we mention that we moved from El Cajon, a look of fear spreads across our fellow ­Tierrasantites’ faces. “Wow,” one neighbor said after I mentioned our old stomping ground. “I have never even been to El Cajon.” To most, El Cajon is a foreign land, a place where they would immediately lock all car doors upon entering. In reality, ­it’s not so ­bad.

People around here take their ­homeowners’ association very seriously. Members walk around town with shiny clipboards and issue citations if your paint is chipping or if you have noticeable clutter around your home. Everything must be ­pristine.

A while back a group of disgruntled citizens organized a coup to overthrow the president of the ­homeowners’ association. They circulated an underground newspaper that was passed out to every home in our subdivision. It divulged the dirty secrets of the ­association’s members. They even went door-to-door for some serious crap talking. It was as if we were cast members on Desperate Housewives. I expected Bree Van de Kamp to show up with a plate of ­cookies.

Over the summer we attended our annual block party. Everyone contributed homemade items. We sat politely in lawn chairs discussing noise levels, the teenagers who had a bad habit of hanging out at the local park, and what was growing in ­everyone’s garden. I nostalgically remembered our El Cajon block party that involved binge drinking and hot dogs. Our townhome manager showed off her delightful talent for removing her panties while her shorts were still on. At midnight a group of neighbors rode their ­kids’ scooters to the apartment complex behind us and let the air out of the tires of the jeep whose car alarm was constantly waking us up in the middle of the ­night.

I feel a little like the outcast of Tierrasanta. I ­don’t own a minivan, I rarely water my plants, and my kid got sent to the ­principal’s office for swearing at recess. Slowly I am adjusting to life in the ’burbs. I will draw the line at owning a dog that fits inside my purse. However, I did sign my kids up for tennis lessons this ­summer.

I hope you are able to adjust. Moving to a new area is always trying. Congratulations on your win! I enjoyed this piece :)

I love this write-up. Priceless details abound: the parents who gossip about other parents' corn syrup policies; the clipboard-toting homeowner association members. And the contrast between the block parties, Tierrasanta vs El Cajon, is a great example of the difference between living in a 'burb and living in a 'hood with a little more flavor.

This is hilarious! What a dichotomy... This is the funniest neighborhood blog I've read.

This reminds me of the time my Mom was telling me about a co-worker who was looking for a new place to live, because where she lived (I believe it was Encanto) was too dangerous. When my Mom suggested Mira Mesa, where she lived, the woman replied "Nah, that place don't have enough attitude". What she didn't get was the connection between places with "attitude" and places with all that other stuff she was trying to get away from. It sounds like you're missing the "attitude", too. Be careful what you wish for.

FUNNY!!! And so well-written. Congratulations!