Every year at Halloween time I wonder this. Since I have nothing else to do right now I figured I’d write to you to get an answer. Pretty soon it will be jack-o-lantern time, and so I don’t have to wonder again this year, please tell me how does air get inside pumpkins?

— Tired of this question, via email 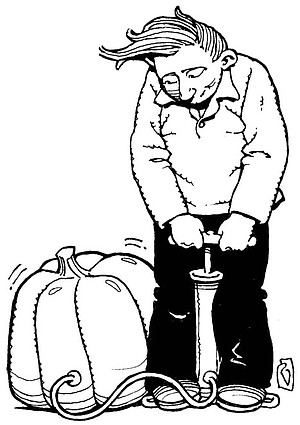 Guess this question has been hanging around the luxurious Alice offices for months now. It’s all covered with smashed candy corn and what Grandma finally identified as melted mini Snickers bars, so it probably got caught up in the annual office costume party. Our humblest apologies, Tired. Didn’t mean to ruin the festivities for you. But anyway, you’ll be all set for Halloween ’09, ’cause we’ve got the inside, um, scoop for ya. And it goes something like this. It’s not so complicated.

All above-ground plants gotta breathe. In with the good air, out with the bad air. For this they all have spots of specialized cells that open the inside of the plant to the atmosphere around it. Even granite-skinned pumpkin fruits. (Yes, pumpkins are fruits, not veggies, botanically.) So, we got holes. Next, if the plant part is green — just like they told you in grade school — it needs to suck up air and use the carbon dioxide, then get rid of oxygen. Oxygen is the trash left over after the green plant has done its photosynthesis thing. Pumpkins, being not green, take in the air, grab the oxygen, and exhale the CO2 left over after all the pumpkin cells have done their work, like all non-green growing things.

So, why is a pumpkin full of air instead of being — what? — a vacuum? A gravity-free zone filled with floating seeds? It’s full of air because the leathery, rocklike exterior of a pumpkin is full of holes. I hope this makes next Halloween go much more smoothly.

What’s the fastest a human has ever traveled?

You want fast? Think NASA. Apollo 10’s three astronauts reentered Earth’s atmosphere going 24,830 mph. If heights aren’t your thing, the fastest vehicle is the British ThrustSSC, a car powered by two turbo-jet engines: 763 mph and one broken sound barrier. Driven by a pilot, of course. This fine ride burns 4.8 gallons of fuel every second. So, about all you can do with it is drive from gas station to gas station.

Recently we have had high tides in the +6 ft level and low tides at the -1 ft level. My question is +6 relative to what? Sea level? And -1 to what? Why don’t the numbers come out +3 and change and -3 and change to reflect more of an average. Also, beachfront property boundaries are often noted as “the mean high tide line.” Seems to me someone could “fudge” that value and gain some extra dirt.

Um, thanks for the invitation to go boating, Otterhund, but Grandma has told us to turn it down. We wouldn’t even want to be aboard when you throw out the anchor. With numbers like yours, you wouldn’t have a clue as to how deep the water is. Check around your house and see if you maybe have a nautical chart of some coastal waters somewhere. When you find it, you’ll note little numbers scattered around the blue parts (the water). These are datum points, the average depth of the water at that spot at low tide. So, a boat pilot scans the chart to figure where the water is going to be deep enough (even at low tide) for his boat to make it safely into harbor.

But tides and therefore water depths vary a lot, depending on the relationship of the earth to the moon from day to day. So, the tidal datums are just numbers to use to calculate the real water depth on any particular day at any particular time. So, as you say, we’ve been having plus tides and minus tides lately. A +6 tide means today’s high tide will be six feet above the datum point; a -1 tide is a low tide a foot shallower than the datum point. So, if a particular datum point is, say, 6 feet, high tide will be 12 feet, low tide will be 5 feet. Pilots can get daily updates on tidal variations so they have some real figures to use to massage the chart datum points. Sorry, but an “average of +3 and change” wouldn’t be useful to anybody, not even beachcombers

No fudging of the mean high-tide line on the beach to enlarge your kingdom. That’s an official figure arrived at by hours of sweaty measuring and calculating by the U.S. Geological Survey. Besides, who would want to cheat their way into an extra half acre of kelp and beer cans anyway?