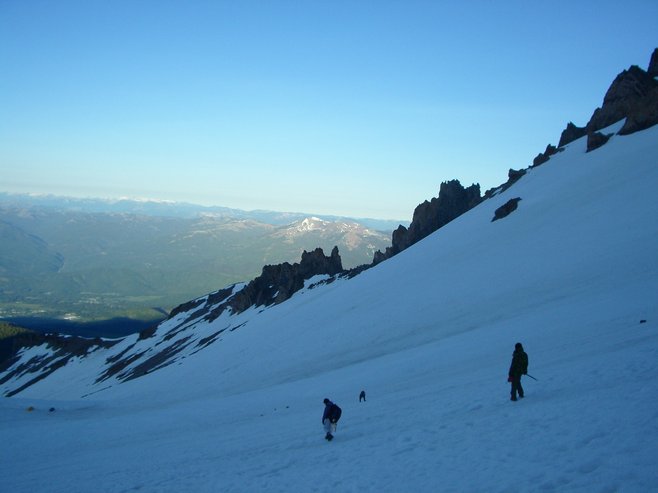 We just climbed to the top of Mount Shasta! It was an intense hike; the difficulty was matched only by the awesomeness of the event. We experienced freezing temperatures, dangerous predicaments and high altitude, but when all was said and done, it proved to be one of the most amazing experiences we’ve ever had.

Helen Lake is in reality not a lake at all, but rather a valley of snow. At Helen Lake we had to melt snow on our backpacker’s stove in order to fill our water bottles, and we almost froze due to temperatures of around 15 degrees that night (a reported -10 degrees with wind chill), even though the day hike had been in the 60s.

The next morning we left at 5:30 a.m. for the summit, with one light 25-pound pack that contained 6 quarts of water, a loaf of wheat bread, two pounds of snack bars and the first aid kit.

We got to the summit at about 1:00 in the afternoon, at an elevation of 14,200 feet. The climb would have been impossible without ice axes, crampon steel-spiked boot bottoms, gators, helmets (to avoid any falling rock) and a series of hiking techniques such as the “duck walk” and “French steps” that we had learned the previous day. The climb was extremely rigorous, and we had to use switchbacks and take slow steps and deep breaths to make any progress toward the summit. Temperatures during the hike varied from 25 degrees at the start to 60 degrees at warm spots, and intermittent cold winds in the 30s.

We didn’t get altitude sickness, but were both lightheaded and exhausted. We took a lot of Advil, which we think helped us overcome some of the problems climbers can experience due to high altitude. Thankfully, our summit day was beautiful, cloudless and free from storms.

Also, what really helped was that at this point the conditions were good for “glissading” down most of the way back to Lake Helen. This is a technique that involves sitting on your rear and sliding down the mountain in a small snow trough where somebody has previously glissaded. It took only one hour of hiking and glissading to get back to Lake Helen. We put together our heavy backpacks and were back down at the car by 6:30 in the evening. We said a lot of prayers thanking God for seeing us safely to the summit and back home.

If you are interested in this climb, we strongly recommend you contact The Fifth Season Sporting Goods in Shasta City (call 530-926-3606 or visit thefifthseason.com). They’ll help you with everything you need, including proper equipment, climbing lessons and basic advice for reaching the summit.