“Live clean, die nasty,” as suggested in track three, “19:04,” seems to be the prevailing theme of this rap album. The four men behind it — Kostik, Tank, Mute, Kalibur — paint a tough-as-nails portrait of themselves and the San Diego they inhabit on the album’s 20 tracks, providing an in-your-face look at a harder side of the city.

The production work on the collection is solid, and the compositions are compelling — some tracks feature string and guitar intros, which is a refreshing departure for the genre. The beats are well mixed behind the vocals, which are executed with enough timing and talent to distract one from the album’s biggest shortcoming: the lack of originality in its lyrical content.

Despite a dedication to the craft that is obvious, the quartet doesn’t tackle anything new. The self-promotion, however creatively put (“we’re nastier than a shit salad with tampon croutons,” declares track “Ain’t Fuckin’ Wit Dago”), is a standard element for a hip-hop record, and the violence, too, is a stale subject. References to magnums and gunshot samples are heavily used, interspersed between quick bites of androgynous screaming for emphasis. “Hang Up and Drive” is a funny, on-point exchange between buddies on the way to a drug deal — they shoot up a car that won’t let them get over for their exit — but the excess use of the theme remains tired.

The Live Sick Compilation isn’t exactly family-friendly, one should note. With a healthy dose of “motherfuckers” peppered throughout, it is probably more for the 18-and-up set. Definitely not appropriate fare for the car ride to Timmy’s soccer game. 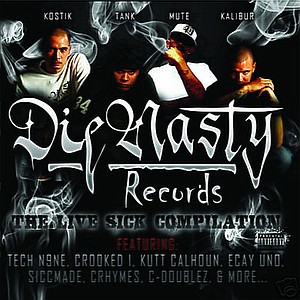