The Laguna Mountain range, just east (and squarely in the “rain shadow”) of the nearby Cuyamaca Mountains, snags just enough moisture from passing Pacific storms to support a forest of scattered live oaks, black oaks, and Jeffrey pines. Here and there, a rounded summit or two pokes above the trees, unobstructed views of distant horizons are offered. The trivially short Kwaaymii Trail, originating at the Mount Laguna visitor center, will take you to one of those summits: Piñon Point (or Pinyon Point).

To get to the visitor center from San Diego, drive east on Interstate 8 to the Sunrise Highway (Laguna Mountain Recreation Area) exit, just east of Pine Valley. Drive north, uphill, on Sunrise Highway, observing the mile markers, which increase from approximately mile 13.5 at the I-8/Sunrise Highway interchange. Drive to the Mount Laguna visitor center, on the left at mile 23.5, and park there. Be sure to post a National Forest Adventure Pass (available for purchase in the visitor center if you don’t have one) on your parked car.

On the Kwaaymii Trail — the interpretive trail looping over Piñon Point — you’ll learn about Indian uses of native plants for food, shelter, clothing, and medicine. Bedrock morteros (deep holes) and metates (shallow depressions) used for grinding acorns can be seen along the way. The Kwaaymii, the most recent Native American inhabitants of the Laguna Mountains, were a subtribe of the Kumeyaay Indians.

The large pinyon pine on Piñon Point is a Sierra Juarez pinyon, with needles in clusters of five. Nearby is another smaller pinyon of the four-leafed variety. Pinyon pines with one, four, and five needles are distributed throughout the desert-facing slopes of San Diego and Riverside counties and the Sierra Juarez range of Baja California, but they are relatively rare here in the Lagunas.

On Piñon Point you can also find a patch of prickly pear cactus and several holly-leafed cherry bushes. The fall season brings a bountiful harvest of native fruit — a bit less than sweet to our pampered palates and full of seeds, but no doubt a fitting dessert after a meal of acorn-and-seed porridge. 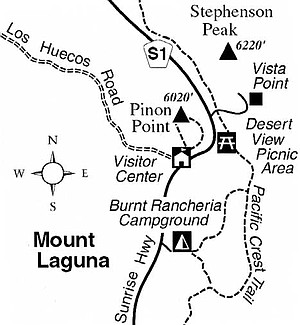