From a clearing just below the summit of Wooded Hill (the highest wooded promontory in the Laguna Mountains), a spacious panorama of two nations unfolds. The blue, south horizon lies somewhere in Mexico, and your gaze may encompass a hundred-mile stretch of borderland. On the right, where the mountains spill into the often-foggy marine layer, mesa-like Table Mountain heaves its broad shoulders over the opaque blanket concealing Tijuana and San Diego.

When strong Santa Ana winds arrive next fall, sweeping away the coastal smog and fog for periods of a day or two, the view from Wooded Hill may broaden to include coastal landmarks such as Point Loma, the Coronado Islands, and San Clemente Island (more than 100 miles to the west).

Right now, Wooded Hill's main appeal is its springtime appearance, a month or more behind schedule due to the late rains and abnormally cool weather of the past spring season. Late-blooming wildflowers are putting on an excellent show at this 6000-foot elevation.

From San Diego, to reach the trail to Wooded Hill's rounded summit, drive east on Interstate 8 to the first exit beyond Pine Valley, signed "Sunrise Highway." Follow Sunrise Highway north for about 8 miles, eyeing the green mile-marker signs posted every half mile. Turn left after you reach marker 21.5 on the narrow Old County Road, a surviving segment of the original access road into the Lagunas. Continue 0.3 mile to a small parking lot on the left, for users of the Wooded Hill Nature Trail. An interpretive booklet for the trail (and for other nearby trails) may be obtained at the visitors' information office, 2 miles farther up Sunrise Highway in the small community of Mount Laguna. 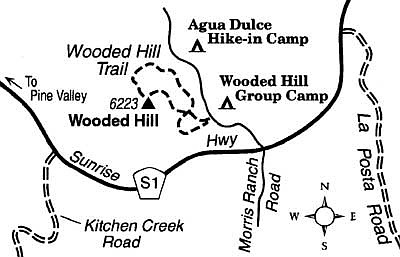 The less-than-direct figure-eight path of the nature trail takes you 1.5 miles through the typical Jeffrey pine/black oak forest of the higher Lagunas. As you approach Wooded Hill's summit, notice the four smallish observatory domes poking up like white thumbnails on the ridge to the south. They are part of Mount Laguna Observatory -- San Diego State University's off-campus site for astronomical research and instruction. A planned fifth telescope, a 100-inch reflector (half the diameter of the Palomar giant), is in the planning stages.