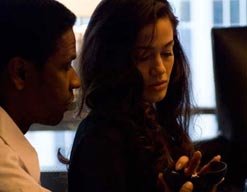 Two ways to start a movie with a bang:In American Gangster, Denzel Washington lets us know right off the bat that he's a bad, bad, bad dude by dousing an already beaten-bloody Latino with gasoline, setting him afire, and then shooting him in the head. Bang. In Before the Devil Knows You're Dead, a stark-naked Philip Seymour Hoffman, not in the fittest of trim, is captured by the camera in flagrante delicto, pumping away doggy-style behind a matchingly starkers Marisa Tomei. A different kind of bang. (And by the way, those of us who have always found Marisa Tomei attractive will find her there, and thereafter, to be more extensively attractive than ever before.) Both movies do grab your attention, and in unequal degrees they hold it.

The first one, "based on a true story," is a formula underworld drama poured into an epic template. Like Jiffy-brand waffle batter spread over an iron the size of a billiard table. It traces, in separate intertwined storylines, the converging upward paths of criminal and cop: the former, the bad, bad, bad Washington, starting out as the servile driver and bodyguard for the legendary Bumpy Johnson, a big fish in the small pond of Harlem into the late Sixties; and the latter, Russell Crowe, working his way up as an undercover narc in New Jersey, studying for the bar in his spare time. The bodyguard inherits the small pond upon his boss's death, and expands it into an ocean by negotiating first-hand a drug deal in the war zone of Southeast Asia, peddling a superior product for less money, modelling his empire on the Mafia, surrounding himself with family members he can trust. Ultimately he surpasses the official Mafia in market power, while staying below the police radar until he shows up at the first Ali-Frazier fight in a chinchilla coat, best seat in the house. The cop, all this time, conducts himself as an unfluctuating straight arrow (notwithstanding a Wambaugh-worthy personal life, with a hostile ex-wife, neglected child, messy custody battle) whose main claim to infamy comes from turning in a recovered cache of nearly a million dollars in unmarked bills, an act of honesty that forever alienates him from his comrades on the police force, and fits him only to head up an Untouchables-like independent narcotics squad, on a collision course with the Harlem kingpin.

Their eventual meeting comes, and drags on, as something of an anticlimax, after an excitingly staged drug raid from which the kingpin is lucky to be absent. The opposing paths up to that point are smoothly graded and well greased; and director Ridley Scott, the epitome of slick (Alien, Blade Runner, Thelma and Louise, Gladiator, Black Hawk Down, and so on), moves things along at a tolerable pace, although there's the distinct impression that even if he knew any shortcuts, he wouldn't take them. His goal is epic, and he would gladly drag his feet to get there. At two and a half hours plus, he indeed does get there. Washington, to pay him a backhanded compliment, is never quite as credible as a through-and-through baddie, even though that seems to be the way to the Oscar (i.e., Training Day). Crowe on the other hand is a perfectly credible crusader, overcoming no greater obstacles on the road to respectability than his buoyant white sneakers and his unflattering, inexpensive period haircut, framing his face with folded wings.

Before the Devil Knows You're Dead (a phrase that completes the Irish drinking toast of "May you be in heaven half an hour...") is several degrees more interesting, an attempt by the eighty-three-year-old Sidney Lumet to keep up with the Tarantinos, piloting a caper film of back-and-forth time jumps and alternating points of view. The caper itself, a jewelry store stickup, is strictly small-time. "We don't want Tiffany's," the mastermind, a drug-dependent real estate accountant (Hoffman), pitches the idea to his younger brother, a deadbeat dad (Ethan Hawke): "We want a mom-and-pop operation." More specifically, the operation of their own mom and pop (Rosemary Harris and Albert Finney), squeezed between Claire's and Footlocker in a cookie-cutter Westchester shopping mall.

The robbery goes very wrong very early, and the ensuing time scramble dispenses information and revelations on an unpredictable schedule. We meet "Grandma," for example, at a school play after we have seen her shot in the holdup and before we find out she was not supposed to be at work that day. And, if I am remembering it in the proper disorder, we find out that the recruited younger brother is having an affair with his sister-in-law, the mastermind's wife, before we even know that the mastermind has any part in the plan. The totally botched robbery, leaving no prospect of success and profit, quickly eliminates much of the standard suspense in this sort of thing (cueing instead a brooding Fargo-esque musical score from Fargo's actual composer, Carter Burwell), and it permits the focus to shift to the deeply jaundiced view of family life -- family discord, family disloyalty, family dysfunction. That view, while it lets in a fair share of malicious humor, is not to be taken lightly. Lumet, whose long list of credits runs along the lines of Twelve Angry Men, Long Day's Journey into Night, Fail-Safe, The Pawnbroker, Serpico, Dog Day Afternoon, Network, The Verdict, Daniel, and Running on Empty, is by nature banished from lightness.

American Gangster opens "wide" this Friday. Before the Devil... opens narrowly the next one.