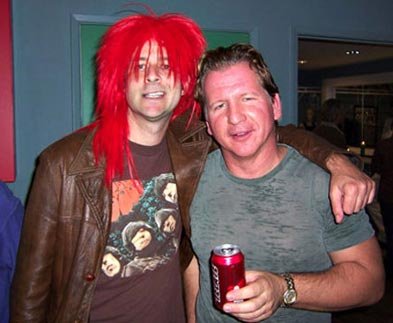 A couple weeks ago I missed several parties because I was sick. One guy called from Mira Mesa when he noticed his neighbor was having a party. Glad I missed that -- there was a shooting. A guy named Carlo, who used to work at 4th&B, told me his buddies were grilling steaks and got Joey Harris (former Beat Farmer) to perform. Sorry I missed that one.

A woman sent an invitation to the Reader about a kids' party for adults -- root beer floats, cotton candy... All these parties fell on the weekend I was recovering.

The week before I got sick, I went to Ray at Night in North Park with some friends. I got wind of a party to be held at the loft of an artist.

As my friends and I were coming out of a gallery, we ran into someone we vaguely knew. He told us of a party nearby, which he said sounded amazing. We walked for miles looking for it and decided we'd just stick with the original artist's party.

Turned out that party was the one he was talking about.

As I walked in, I noticed a lot of movie posters and pop art. There was a guy with a scarf on, and he had long curly hair. I said to my friend, "Robert Plant called. He wants his look back." My friend responded, "Or Michael Bolton."

When another guy walked by who had a goatee, someone nearby said, "I'm not sure about the look of that guy with his goofy hat." I responded, "If he has a motorcycle with a sidecar, that look is perfect for him. If he's just an artist and thinks that look works..."

One of the women with me added, "Or a Vespa. I could see him riding one of those."

Another friend asked, "Are you going to spend the entire evening making fun of everyone?"

There was a table of food near the kitchen. A bowl in the middle of the table was filled with candy bars. I heard someone say, "I bet that's all leftovers from Halloween." I said, "Yeah, but there are granola bars in there. Those probably weren't for Halloween." My friend said, "I remember people giving those out for Halloween. I'd hand it back." Someone else added, "Those are the people who get their houses toilet-papered." I said, "I thought that was reserved for people who didn't give out anything. I'd take granola bars, even if I wasn't going to eat them. You never know what you can trade." A guy named Andrew, who I see at many art-related events, said, "That's true. You can trade with that hyperglycemic neighbor kid, and he'd take two of those for a Hershey bar."

There was a jar of peanuts on the table, and someone said, "I really want some peanuts, but I'm afraid it's one of those gag things -- if I open it, a snake's going to jump out."

Someone else said, "You don't eat snake? Hey, if you like peanuts enough, it's worth the risk. And besides, if you're expecting the snake, it shouldn't scare you."

I went out back to smoke a cigar and got into a discussion with my friends. When we were at Ray at Night, a few people had asked us for cigarettes. None of us had them, but I suggested that it seems odd to ask strangers for cigarettes -- it's not like a cheap piece of gum.

This became funnier when a blond woman approached my friend Bonnie for a cigarette. Bonnie said, "We were just talking about people who don't have their own cigarettes." This woman didn't take that well. She walked away to talk with her friend and was pointing at Bonnie. I said, "I'll go over and ask her for a cigarette. Or another cigar." My friends objected, and I suggested, "How about you go over with those celery and carrot sticks. Tell her you don't have cigarettes but offer her one of these. They're healthier."

A couple was playing Ping-Pong in front of a cement wall where visuals were being displayed. Later in the evening, they showed the movie The Man Who Fell to Earth against that wall .

I was told this guy had a Rolling Stones-themed party -- you had to dress like one of the Stones. I asked a blond woman with an "SD" hat that lit up which Stone she was. She said, "I don't know. I had long blond hair." I was trying to think if Ron Wood ever had blond hair, until she said, "I was one of the wives." I said, "Jerry Hall?" She said, "Bianca Jagger." I explained that Bianca was black, so it was probably Jerry Hall. Someone else at the party told me he thought she was Marianne Faithful.

When the homeowner walked by, I asked, " Exile on Main Street is the best Stones album, isn't it?" He smiled and said, "It sure is." He ended up showing me some of his Rolling Stones artwork upstairs.

I heard one woman tell her boyfriend, "I want one of those SD hats that light up." He said, "It doesn't stand for San Diego. It stands for sexual deviant." She said, "Now I really want one."

When I went back to talk with Andrew, I noticed he had sparkly glitter all over his shoes. He said, "Hey, you never know when bowling is going to break out." That's funny coming from him, since he looks like the Dude in The Big Lebowski.

One area of the loft is used as a dressing room whenever they film there. A few people tried on the various wigs.

When the movie started and things got quiet, I decided to split. Someone asked me, "How can you leave a party at such a cool place?"

"I've already been here over an hour," I said, "and we can't talk now that the movie's playing." A few people were heckling the movie, while others were saying, "Shhhh!"

I whispered, "If they didn't have those two couches blocking that basketball hoop on the wall, I'd stay longer and maybe challenge someone to a game of horse."