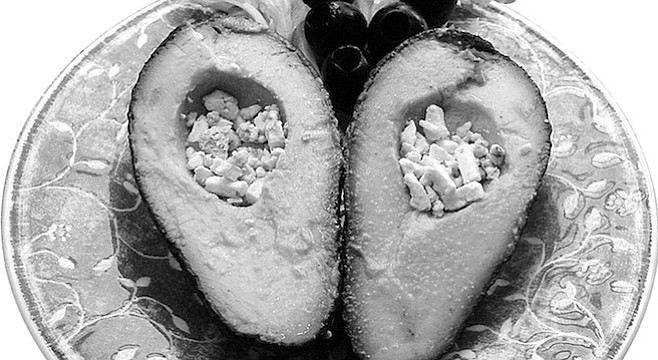 "Approximately 20 percent of the [42,000] people in Fallbrook deal with avocados in some way," says Bob Leonard, executive director of Fallbrook's Chamber of Commerce. The commercial avocado industry in the United States was founded in Fallbrook when the first avocado tree was planted there in 1912. But the city's moneymaking green fruit has seen a financially stagnant year. Forty-four percent of the avocados consumed in this country are now imported, up from four percent just a decade ago. Most of our imports come from Chile, a country in which avocado exports have tripled in the past season. Less than half of our imports are from Mexico.

California is responsible for almost ninety percent of the total avocado production in the United States (Florida supplies around ten percent and Hawaii less than one percent). But according to the California Avocado Commission, the overall "producing acreage" decreased by over three percent between 2003 and 2004. More than one thousand acres of trees were either removed or abandoned in San Diego County during that time.

Leonard gives two reasons why San Diegans should not purchase avocados from outside the country. He first cites support of American labor. "Just like any other product, if you can buy American-grown fruit you stabilize the owner of the grove and all of those workers." There are over 36,000 acres in Fallbrook, and at least half of that land is dedicated to agriculture.

The second reason has to do with the danger of fruit imports. "The USDA is underrecognizing the danger of having these pests brought into the country," Leonard says. In 1999 three fruit flies from Mexico caused quarantines in Fallbrook. "At the time of that occurrence, $75 million worth of things grown here were potentially impacted in the negative. Businesses could not survive." Leonard knows three farmers who lost their groves.

Fallbrook is doing what it can to promote its export. On Sunday, April 17, the community will host its 19th annual avocado festival. In the past the festivals have introduced new products like guacamole-flavored potato chips and avocado ice cream. The new potato chips were unveiled in the agricultural display section of the festival three years ago by Snack King and Calavo, a packing plant in Temecula. The chips are still sold locally in Fallbrook stores.

At the early part of the 20th Century, the most popular kind of avocado was the Fuerte, which is pear-shaped with a thin, smooth green skin and creamy, pale flesh. "Up to 1980 Fuerte was the main variety stores liked best," says Reuben Hofshi, co-owner of the packing plant Del Rey Avocado, located in south Fallbrook at Mission and Main Street.

Hofshi explains that Hass is now the favorite variety for chain stores because "they turn black and any blemishes don't show. They have a thick skin and a very good flavor." Developed by Rudolph Hass in 1926, the Hass avocado began to catch on in the 1950s, surpassing Fuerte's volume in 1972 and tripling the number of trees planted over the next decade, according to rawfoodinfo.com. At the peak of its season -- December through February -- Hofshi says he finds Fuerte to be the best tasting of all the varieties.

Hass is the only avocado that grows year-round. It is oval-shaped and turns from green to a purplish-black as it ripens and has the longest shelf life. Other varieties are Bacon, Gwen, Pinkerton, Reed, and Zutano, which ripen from midwinter (Bacon) to summertime (Reed).

"I hate to admit, we don't buy a lot of avocados," says Leonard. "Everyone in town has someone they know with a grove. Every time the grove comes into the picking season, you end up with not one, two, or three -- you get free fruit delivered to you by hand in the grocery bag." -- Barbarella