Ramble along the beach below the Leucadia and Encinitas sea bluffs.

Some of the most geologically instructive vistas in San Diego County can be seen by walking the narrow strip of sand and/or cobbles below the Leucadia (northern Encinitas) sea bluffs. If you want to avoid getting squeezed between a breaker and a cliff, any such walk should coincide with a low tide -- better yet a "negative" tide, which means a tide level lower than the long-term average of the lower of the two daily low tides. Auspicious negative tides for the remainder of the year, all occurring during afternoon hours, will take place Thursday through Sunday, November 11-14; Thursday through Sunday, November 25-28, Friday through Tuesday, December 10-14; and Friday through Monday, December 24-27.

Allow well over an hour to traverse the 2.8 miles from South Carlsbad State Beach (just north of La Costa Boulevard) to Moonlight Beach (west of Encinitas Boulevard in Encinitas). You can return by way of the beach, city streets, a combination of the two, or by a prearranged car ride.

Steep cliffs rise on the left as you head south from South Carlsbad. They consist primarily of a 50-million-year-old sandstone derived from lagoon and sandbar deposits. As the sandstone erodes away, cobbles embedded in it are released. Wave and tidal actions have stripped away much of the loose sand on the beach, exposing extensive beds of these cobbles. Many of the exquisitely smooth, water-worn cobbles are metavolcanic rocks from sources as far away as present-day Sonora, Mexico. This is due to river transport coupled with millions of years of tectonic movement northwest along the San Andreas Fault Zone.

You'll see many startling examples of the fragility of the coastal cliffs in the next two miles. Winter storm waves, coinciding with high tides, crash forcefully against the base of the cliffs and tug at the underpinnings of the many private stairways that zigzag down to the beach. Some of these stairways have elaborate counterbalance mechanisms that can raise them out of harm's way. The cliffs are fluted with both old and fairly recent landslides, including one large semicircular feature some 60 years old, now almost completely revegetated.

The property owners above have used every strategy imaginable to stabilize the cliff faces, including elaborate retaining walls and terraces, and flexible pipes to channel runoff. Some cliffs are coated with gunite or other impervious materials, and others wear a coat of ground-covering vegetation that hopefully helps hold things together. Overwatering is a problem: excess irrigation water percolates into the porous sandstone and oozes from the cliffs at beach level, weakening them.

When the cliffs draw back and the sandy strip begins to widen, your arrival at Moonlight Beach is imminent. There you'll find welcome amenities, including drinking water, rest rooms, and a snack bar. 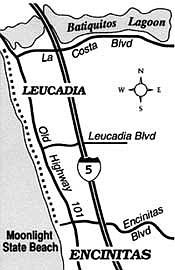