Hike past tidepools to the La Jolla Caves during the lowest of low tides.

South of the broad, gently shelving beach at La Jolla Shores, the shoreline quickly changes character, becoming rocky tidepools, a fringe of wave-tossed boulders and cobbles, and steep cliffs. Just offshore, the deep, submarine La Jolla Canyon swallows sand creeping south on longshore currents, so that only a meager wisp of sand can be found beneath the cliffs. These cliffs face the normally calm waters of La Jolla Bay, but at various times in the past the waves have hurled themselves with enough force to gouge out a series of sea grottos -- the La Jolla Caves.

The westernmost cave, for tourists mostly, can be reached by a long stairway that begins inside the Cave Store on Coast Boulevard. The half-dozen or so other grottos in the series are usually accessible only to swimmers and kayakers. The two large easternmost caves, though, can be reached by dry-land hiking during selected rare intervals, namely extreme low tides. Next week features three such propitious occasions: On Tuesday, January 20, the tide sinks to a relatively abysmal -1.9 feet at 2:50 p.m. A repeat -1.9-foot tide occurs Wednesday, January 21, at 3:32 p.m. On Thursday, January 22, the tide dips to -1.7 feet at 4:12 p.m.

Start your walk, 30 to 45 minutes before the predicted lowest tide, from the south end of La Jolla Shores Beach, or from the beach access path alongside the Marine Room restaurant on Spindrift Drive. Work your way south over the cliff-hugging cobbles, or across the newly exposed tidepools, taking care not to step on the slippery green rocks. Some of the rocks are deeply pocked, evidence of "biological erosion" caused by the chemical secretions of urchins, barnacles, and other sea creatures. Crabs, startled by your approach, retreat hastily into crevices. Occasionally you can find a small octopus in one of the deeper pools or a seal resting on a higher and drier slab of rock.

The first big grotto you come to soars some 50 feet and pinches in toward the rear. Let your vision adjust to the low light inside. The sandstone walls are stained with a rainbow of colors: red and orange from iron oxide, greens and grays from plant life, and purple from iodine in kelp. In the back of the cave is a low passage leading to an adjacent grotto. Enjoy, but do not forget about the incoming tide! 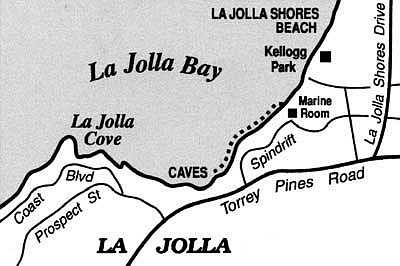