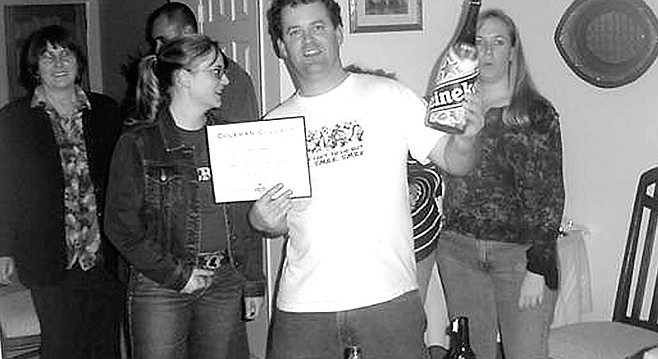 When I got a call to go to a party in Scripps Ranch for somebody who graduated from Coleman College, I was thinking it would be somebody in their early 20s, but this graduate was in his early 30s. He did tell me he was in the military for years and after that went straight to work. He decided to go to Coleman College three years ago and had just graduated. His friends were ribbing him with lines like "I didn't think Rob was capable of graduating from anything. Who knew that dumbass actually had a brain?"

When Rob saw another one of his friends show up, he said, "I can't believe you made it. Thanks for coming." The guy responded, "I had to come...there's free beer."

When I walked out onto the back patio and shut the screen door, a lady then tried to get back into the house. Somehow the door got locked. It was at a moment when nobody was in the living room, so we spent 15 minutes trying to figure out how to get back in. One guy whipped out his pocket knife. Then somebody said, "Why doesn't somebody just walk around to the front door and go in and open this thing up?”

One woman asked, "Are you going to write about me in your story?" I replied, "You have to say something interesting." She said, "Something interesting. There, I said it." Her friend overheard this and said, "Put in your article that her nickname is 'Boink.'"

They started talking about breast size, and I asked, "Should I write that you're a D cup?" She said, "No, put that I'm a C." Somebody else said, "Do you know why mermaids wear seashells over their breasts? Because 'b' shells are too small and 'd' shells are too big." Everyone laughed. A guy said, "Everyone seems to either be talking about Beamers or boobs." Jennifer, who was in her early 20s, was mixing a lot of drinks. There were lots of different bottles of every kind of alcohol plus coolers filled with beer and soda. But Jennifer was mixing fruity drinks for a few women. Since her parents were at the party, I asked if they minded her drinking. She said, "No, they're cool. I mean, if I got a tattoo, they'd freak. My mom didn't talk to me for a week when I got my belly button pierced.' She showed us, pulling up her "I love nerds" T-shirt.

The graduate's mom was there from out of town, and we were told she was a Mennonite. I asked, "Isn't that a cologne?" This guy said, "No, it's some religion. A lot of Amish are Mennonites. It's a mix between the Protestants and the Amish." Somebody else told me later, "They are really into the Bible. The Mennonite religion was named after a Catholic priest named Menno Simons."

There was a cute little girl who was around ten. She came up as a group of us were talking about music. She seemed bored, so I asked her what kind of music she liked. She said, "I'm only allowed to listen to Christian music. And country." When the girl walked away, somebody said, "Can you believe there are actually kids that age that have parents that let them listen to Britney Spears and rap?"

I heard two guys outside on the patio checking out the various women. One thought a woman was attractive, and the other didn't. He said, "I guess it's all in the eye of the beer holder."

The back yard patio was set up nicely. There were lots of tiki torches all around. There were three big tables, and Don was cooking hot dogs and hamburgers on the grill. When the flames got to be really high, his daughter said, "I'll name that last drink the 'Flaming Don' after you." I asked Don if the neighbors ever complained when they have parties, and he said, "The ones on both sides never have. But the people behind us did once. My daughter had a band playing, and the cops showed up around 9:30. It was still early, so I'm not sure why they cared."

Another group of people was talking about their favorite '80s songs. Rob had his guitar there and started playing. His friend kept yelling for Grateful Dead tunes, but Rob stuck to songs everyone knew like "La Bamba" and some Beatles tunes. I later heard the Grateful Dead fan talking to his friend about a previous party where they had 'shrooms and LSD. I asked if that is common at their parties, and he said, "No. We've only had a few parties like that. Most of the parties just have alcohol." His buddy piped in, "Or pot. But there are too many parents here at this one. That's why I'm only drinking this." He held up a root beer.

A group of people started talking about Halloween costumes. I mentioned that I was Elvis one year carrying empty pill containers filled with Sweet Tarts to chomp on. The ten-year-old was there again, so to get her involved I asked, "What were you last year for Halloween?" She said, "I'm not allowed to participate in Halloween. We go to the Harvest Festival." I forgot she's the same girl who listens to Christian music. I opened a Mike's Hard Lemonade, and the inside of the bottle cap said "giraffe." I asked another guy who was drinking one why it said that. He responded, "Hippopotamus wouldn't have fit." I only had a few drinks, since I was going to another party. The table was filled with all kinds of food, so I grabbed some pineapple and watermelon

Since we were in Scripps Ranch, I asked the owner of the house how close the fires came last fall. She said, "Not too close. But the smoke was so bad we had to evacuate. We couldn't breathe. We packed a few things and left." Another lady heard this and said, "I live in Scripps Ranch, too. On my street, we had the first house burn down in all of Scripps. It was at 7:27 in the morning. We had a few more houses burn down on my street, but luckily we made it. We had some tile damage and smoke damage from a window I left open when we evacuated." Before I left, I stopped at the kitchen counter to say goodbye to a few guys I had been talking to. One of them held up a cucumber that was sitting there and yelled to his friend, "Hey, Dave, this reminds me of the Mardi Gras party we were at last month." I left before I got to see what would become of the cucumber at this party. 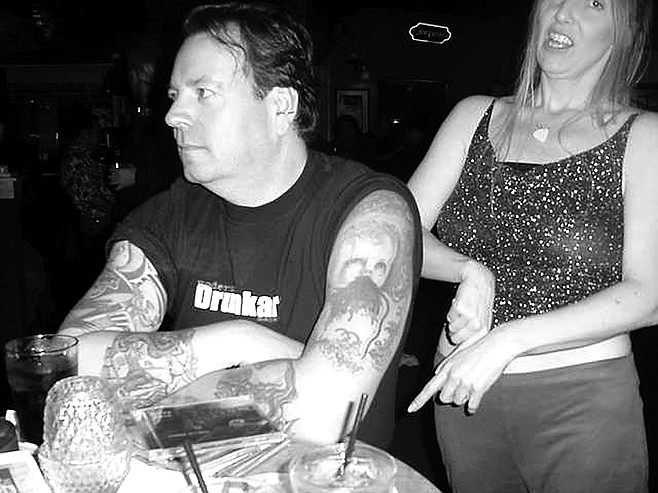 Peg and her friend Justin

Since this party started at 6:00 p.m., I was easily able to make it to the next one that started at 9:30 in Bay Park at Tio Leo's. The lady hosting this bash was turning 40, and one of her favorite bands, the Flying Putos, was playing here; they have a few members from the Beat Farmers. I noticed when I got there that people were in the process of passing around the birthday cards Peg had gotten. I wondered if anyone ever got bothered by that. Most of them are funny cards that talk about being "over the hill" and reasons why they didn't buy a birthday gift. But what if somebody wrote something personal that they didn't want everyone to read? Do they say, "Don't pass my card around!"? I asked Peg about having the party at a restaurant and she said, "Look at this mess on our table. I don't have to clean it up." She told me there were more people at her house earlier, but some didn't want to go out later for this ("Or spend the $7 cover to get in," she speculated). I quickly found out that taking notes at a Mexican restaurant isn't a good idea when salsa is dripping everywhere.

A few of us were checking out a couple at the bar. The woman looked like a mix of Marilyn Monroe and Jayne Mansfield (okay, a more current reference for younger readers: a thin Anna Nicole Smith). She was with a guy who had a mullet. We were making fun of his hair, but when he got up to go to the bathroom, we saw he was 6'5". Somebody said, "Go and tell him what you think of his hairstyle." When the band played a Beat Farmers song, a guy named Steve said, "Country Dick Montana [the Beat Farmer who died onstage] spilled beer on me once." I replied, "Who hasn't had beer spilled on them by Dick?" 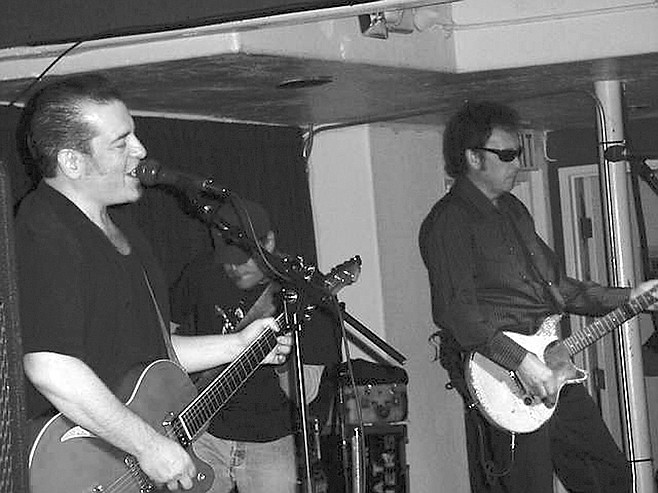 The Fling Putos - a few members from the Beat Farmers

We were talking about how much we liked Tio Leo's, and I told a couple about the time I was banned from the joint. It was around eight years ago, and a friend of mine was in town from L.A. The Chargers game wasn't on TV because it was a home game that didn't sell out. We called all the sports bars to see which ones would carry it, and only Tio Leo's had it. I said on the phone, "Are you sure you're getting it? Nobody else is." The woman said, "Let me check." She came back to the phone and said, "We paid for a few games this year, and this is one. We will have it on." So my friend and I got there at 12:30 and ate lunch. At 1:00, there was no game. Everyone was booing and upset. At 1:30 they announced they couldn't get the game. Everyone booed. I told the waitress, "We aren't going to pay for lunch, since you couldn't get the game, and that's why we came here." She brought a manager over who asked if there was a problem with the food and why I wouldn't pay. We calmly went back and forth, with her continuing to say she wouldn't comp the bill. When she saw I wasn't going to pay, she ripped up the bill and said I could never return to the restaurant. So here I am, back at the scene of the crime. The Flying Putos played some good originals, like their song about "living in a Lakeside trailer park," and "Riverside." They did covers of the songs "Gloria," "Runaway," "I've Just Seen a Face," and "Well-Respected Man." It was nice when they sang "Happy Birthday" to Peg in the middle of their set.