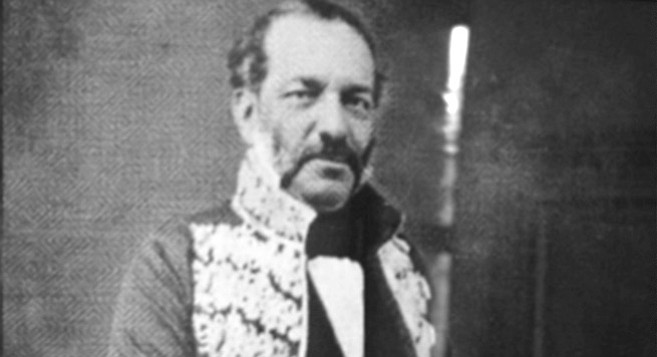 Late in 1846, Yeoman Joe Downey wondered why the Portsmouth, “the finest vessel on the coast,” had anchored six months in San Francisco Bay, “while all the other old butter boxes were sent to cruise and signalize themselves.”

America was at war with Mexico. That battles were being fought, and “stirring scenes enacted,” irked the Portsmouth crew. “We strove to content ourselves with the hope that our time would come.” It did. On December 5, the Captain shouted, “All hands up anchor.” White kerchiefs waved farewell from shore. Four days later, “We were up to our eyes in soldierizing.”

The 20-gun Portsmouth met with the Sterling near Los Angeles. Dispatches said Commodore Stockton had fortified San Diego and awaited the Portsmouth's arrival to commence his campaign against the Californians.

The ship reached Point Loma late morning, December 9. Baffling winds prevented entrance into the harbor until dinnertime. As the Portsmouth sailed past kelp beds thick as islands and neared La Playa, a cutter from the Congress rowed alongside. News spread among the crew: General Stephen Watts Kearny had marched from New Mexico with 100 exhausted dragoons. On December 6, they had fought Andres Pico’s Californians at San Pasqual, a valley 35 miles inland. At least 18 Americans had died, and 17 were wounded. Californians had suffered few casualties. Downey: “The fight took place just as the morning dawned.” The Americans rode half the night “in a cold rain, most of them so numbed they could with difficulty grasp their sabres; in addition, they were each lumbered up with an overcoat.”

The battle had lasted half an hour. The next day, Pico besieged Kearny’s troops on a barren hillside five miles west of San Pasqual. The Americans had no food, so they butchered their mules and ate the stringy meat.

As soon as the Portsmouth moored, the order came to “belay all,” eat a quick meal, and muster onshore. Then they’d join Stockton’s relief expedition to rescue Kearny at the site — named for the soldiers’ paltry diet—known as Mule Hill.

Just after sundown, three companies assembled near the hide houses of La Playa: Marines, musketeers, and, in the rear, carbiners with pistols and pikes. Every man had a cutlass. A whistle blew, and the squadron dog-trotted to Old Town in canvas shoes.

“Of all the roads ever traveled by mortal man on a dark night,” says Downey, “this was one of the worst; for near a mile along the beach, rocks and stones of all sizes lay in every direction.” Small, unseen gullies caused “sudden death to a fellow’s face.”

After the first mile, the whistle blew for charge step. The group ran faster, stopping for occasional stumblers. Fifty minutes later, an Old Town sentry shouted, “Who goes there?”

Stockton ordered marching rations for the newcomers: three pounds of hardtack, three pounds of jerked beef for every cotton haversack. Around 10:00 p.m., December 9, the relief column of 215 Marines and jack-tars, led by Lt. Andrew Gray of the Congress, marched north through Rose and Penasquitos Canyons.

Turning sailors into instant soldiers was a new experiment Many never found their land-legs. Frequent spills resulted in mud-caked beards and blue jackets; canvas-shod feet ached. But Downey was inspired: “It was a heart warming sight to see these brave men, most of whom had in a manner unsexed themselves, and become what a Sailor hates most, Soldiers, upon emergency.”

Lt. Gray — who four years later teamed with William Heath Davis to build short-lived New San Diego — went by the book. He marched the troops throughout the cold night. They stopped at dawn, writes Marius Duvall, on a “freezing mountain.” The few who could slept on the penasquitos, the “little stones” that gave the area its name.

The column tried to stay motionless, the day of December 10, not to avoid a fight but to surprise Pico at Mule Hill. But Duvall, the Portsmouth's surgeon, found the camp “rather a bad place to escape observation, on the top of a high mountain destitute of trees.

“We lay on the ground all the next day, suffering much for water, and during the night from cold.” They continued their trek at dusk.

A dozen miles away, great crackling sentinel fires surrounded Mule Hill. Californians dined and drank heartily. The sounds of laughter and the scent of roasted beef, wafting across the San Bernardo riverbed, must have struck Kearny’s famished troops like buckshot.

After three days with little food, water, or firewood — and 28-degree nights — Kearny had to choose between starving or fighting insurmountable odds. On the evening of December 10, he passed the word: in the early morning the dragoons would “cut their way to the coast.”

Around 2:00 a.m., the morning of the 11th, Kearny’s sentries heard a rustle below Mule Hill. A surprise attack? No. More like creaking cartwheels and the tramp of soldiers’ feet. Alerted dragoons reached for rifles.

Amid coyote howls and hoots of joy, the relief party marched up Mule Hill in square formation. Then ranks broke into handshakes and backslaps. Caps spun in the air. In the dim campfire light reflecting off large boulders, the rescuers saw spectres: half-frozen skeletons in tattered uniforms. Few had overcoats, fewer had boots. Most of the wounded, lanced by Californian spears and bandaged with the torn shirts of their comrades, had multiple gashes. Mule Hill reeked of decay.

The rescuers didn’t look much better. John C. Fremont complained about a sailor’s “habitual disuse of his legs.” The foot-sailors had trudged a slow-motion marathon through deep canyons on two December nights. Wobbly, many “crippled up with sore feet,” they handed Kearny’s troops jerked beef, bread, coffee, and tobacco. They unfolded clothing and blankets. The dragoons returned the favor, offering the sailors sips of “gravy soup,” the muddy rainwater and mule scraps that had become their staple. After the greeting, Kearny’s gaunt, sleep-deprived troops gave up their “beds” so the sailors could get some rest.

Dr. John Griffin: “They turned in and took a comfortable snooze.” later, they “did not seem discontented with anything but the enemy,” who “did not have the decency to give them a fight.”

At sunrise, only a few of Pico’s lancers lingered at a nearby ranch. The rest had vanished, leaving cattle behind. Downey says the whoops of reinforcements and “stacks of glistening muskets” scared them away. Not so. On December 4, several Los Angelinos revolted against Pico’s superior. Governor Jose Maria Flores. He imprisoned them and ordered Pico to return immediately. Pico got the news and headed north during the night.

At 10:00 a.m. December 12, the 300 soldiers, sailors, and Marines marched, close order, to San Diego through fields of wild oats. Kearny’s troops had departed from Fort Leavenworth June 29 and had completed a 2000-mile, ragged exodus equal to — many say harsher than — the Mormon Battalion’s. Most had never seen the Pacific Ocean. As they crested a hill near Francisco Alvarado’s Rancho de los Penasquitos, the silver-blue horizon gleamed in the distance. “Lord,” shouted one of Kearny’s mountain men with opened arms, “there is a great prairie without a tree!”

The dragoons found a spring at Alvarado’s and drank their first fresh water in five days.

Then they looted the rancho. Alvarado had fled with his family, leaving pigs, chickens, turkeys, sheep, goats, and a barrel of wine. Griffin: since Alvarado “was notorious as an enemy” — a subject still open to debate —“we took everything we wished to eat, and the wine for our sick & wounded.”

The looting became a frenzy. Lt. Gray ordered his men not to partake, but Kearny’s dragoons trampled chickens and slashed rusty sabres at squealing pigs and sheep the way Pico’s lancers had tom into them. “If slaughter was not committed,” says Downey, “it was because there were not enough to be put out of the world to be called by that name.”

Gray objected. He pleaded with Kearny to stop the barbarity.

“Yes, yes...I know,” said Kearny, “the poor fellows are half-starved. Let ’em run. They won’t kill any more than they can eat”

Downey says the rancho looked hit by “a swarm of locusts.” Soldiers herded up the remaining sheep and drove them to San Diego the next morning. The column crossed “table lands” (Kearny Mesa), descended Rose Canyon to False (Mission) Bay, and caught their first glimpse of the fort on Presidio Hill. At 4:00 p.m. in pouring rain, 78 days after leaving Santa Fe, Kearny’s “Army of the West” straggled into San Diego.

Lt W.H. Emory: “The town consists of a few adobe houses, two or three of which only have plank floors. It is situated at the foot of a high hill on a sand flat, two miles wide, from the head of San Diego bay to False bay.”

Families took the wounded into their homes. Joseph Kennedy, his skull lanced five times, died the next day. Edward Beale, who ran 30 miles from Mule Hill with Kit Carson and an Indian to get help, received such “care and tenderness” from a local family, they “turned the current of my life, for I determined to live among the Mexicans of California.”

General Kearny was “ragged, begrimmed, and weary to the marrow. The worst of his wounds” — in the groin — “was not healing, and his last horseback ride had been torture” [Clarke].

Emory—whose topographical map of the journey was, the U.S. Senate later proclaimed, “of towering significance”—quartered in the one-room, 40-by 30-foot adobe jail. He preferred the “open air and the muddy plaza, saturated with all sorts of filth, to this wretched hole .” Owing to frequent false alarms, Emory also complained that sleep was nearly impossible.

William Heath Davis, the impresario who cofounded New San Diego with Lt. Gray, met with many wounded. William Smythe: “He says they all had the utmost horror of the Californians. He spoke particularly of one young man who lapsed into delirium during his visit and called out in terror, thinking the Californians were upon him.”