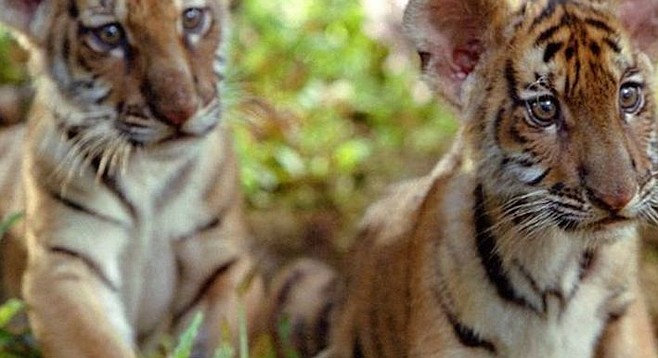 We don’t go out to the movies very often. After last Monday, I remember why. Jack and I have taken our kids to the movies in what Ben calls a “feeater” exactly twice. The first time, last summer, we went to see Finding Nemo. The kids loved it. Ben, who was two, sat through most of the movie. Rebecca, Angela, Lucy, and John never moved. “The screen is so big,” Lucy whispered to me during the previews.

Last October, I flew back East for a family baptism. While I was gone, Jack took the kids to see Brother Bear. When I called that evening to say good night, Jack told me, “It went okay. Ben got a little scared. I took him out to the lobby for a while. Everyone else did great.”

Last Monday, I was rinsing the breakfast dishes when Angela and Lucy burst through the front door. They had been out front playing with our neighbors Morgan and Lindsey. “Guess what?” Angela asked me.

“What?” I answered as I set a plate dripping with pancake syrup into the dishwasher.

“Morgan and Lindsey are going to see Two Brothers with their grandma.” Angela looked up at me with pleading eyes. “Can we go?”

I thought for a moment. Normally in these situations I reflexively say, “No.” The day stretched before me unscheduled. “Sure,” I told Angela. “Let me ask Morgan’s grandma when they’re going.”

Ten minutes later, the kids climbed into our van. We had added Tyler from next door. Angela rode with Morgan and Lindsey and Grandma Shelley. On the short drive to Edwards San Marcos Cinemas, Johnny asked, “Is this the movie about the tigers?”

“I don’t think so. Daddy and I saw a show about the movie on Animal Planet. It seems like a really neat story about tigers who are brothers.”

After we’d bought our tickets and made our way to our seats, I dumped popcorn from the giant tub I’d purchased into smaller boxes I’d grabbed for the kids. “We’ll just share the lemonade from one cup,” I whispered.

Everyone weathered the previews. Ben seemed a little threatened by the loud jets in Thunderbirds. He laughed along with the other kids at The Incredibles. The movie started. Two adult tigers flirted and disappeared into an abandoned temple. The camera focused on a Buddha’s face. We heard the sound of tiger copulation. Through the miracle of telescoping, two baby tigers emerged almost immediately from the same temple.

“Oooh,” Ben said to me. “Look at the adorable tigers.”

Soon the tigers chased after a threatening weasel. Ben gripped my arm. “Mommy,” he asked, pointing to the movie screen, “is that a window?”

“No, Ben,” I whispered back. “That’s just like a television, only bigger. The tigers aren’t really there. It’s just a moving picture of the tigers.”

On the screen, the tigers played with the weasel.

I leaned over Ben and whispered to Lucy, “I need to take Ben out. You and Johnny and Angela can stay with Grandma Shelley.”

Ben and I navigated the dark stairway and walked up the long ramp to the lobby. “That was scary,” Ben said as we wandered around looking at movie posters. “I didn’t like that movie. I want to go home.”

“Sorry, buddy. We need to wait until the movie’s over so we can take the rest of the guys home.”

“But that’s too long,” Ben whined.

After half an hour, Ben said, “I want my lemonade. I guess we can go back into the movie.”

As we felt our way back up the stairs, I heard loud sniffling in the dark. When Ben and I sat down, tears streamed down Lucy’s face. “What’s wrong, sweetie?” I asked her. “Was there a scary part?”

Johnny left his seat and clambered into my lap. “It’s too sad,” he sobbed into my shoulder. “These aren’t fake tears, Mommy.”

“I can see that,” I held Johnny close and tried to wipe away his tears. “But you know there’ll be a happy ending.”

During the course of the next hour, I left the theater with Ben and returned. I couldn’t talk Ben into going all the way back up to our seats, so we sat in the first row next to a handicapped spot. Lucy and Johnny came down and joined us. Ben wandered the bottom three empty rows. Johnny cried some more. “This time they’re tears of happiness,” he told me between sobs

When we emerged into the noonday sun, Johnny’s eyes were bleary. “That was a good movie,” Angela said, “but it was sadder than I thought it would be.”

“Kind of like life,” I said. Nobody seemed to hear.