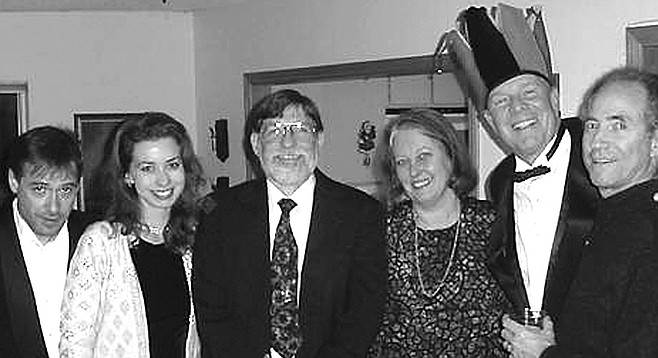 When my friends found out I write about parties, they all told me they'd give me the heads up when a good one was going down. Some have been good about it. Others haven't — and excuses range from "We forgot, dude" to "We had so many drugs, it looked like Rush Limbaugh's medicine cabinet. We'd be arrested if you wrote about our party."

One friend called me. His cousin was staying at the Marriott in Coronado and told him some women were having a party in one of the ballrooms. They were dressed like hookers and strippers from the old days. My friend notified me. I asked why strippers would be partying in the afternoon at the Marriott rather than the Motel 6. He said, "They were, like, burlesque-style strippers, i don't know. You should check it out." I made it there in seven minutes. Hey, it's my job. 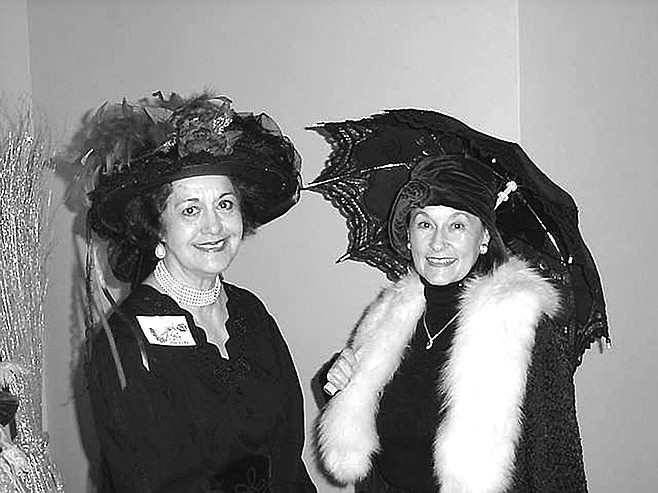 It turned out to be the Victorian Ladies Society, and they looked nothing like strippers. They were beautiful and elegant. When I walked through the doors, a few of the ladies said, "Oh, goodness, a man is here!" Others laughed. I talked first with Lady Alisha, the lady of the purse (in layman's terms, that's the treasurer). She said, "We formed this group because the men had a group called Sherlock Holmes. And the women didn't have anything to do at that time, so we formed this back in 1991. We have tea parties. We attend the Charles Dickens festival in Riverside. Most of the ladies' costumes are reproductions because the authentic costumes are very, very small. Women used to wear corsets,

And we're a lot taller now — and a little bigger."

I pointed to one lady, commenting on her costume, and Alisha said, "She has her boots laced up. And a beautiful parasol. Don't call those umbrellas! They're parasols."

I was introduced to a Lady Vanessa, and a Lady Nancy, who was the choir director. I'm told another lady is "Lady of the Scrolls." I have no idea what that means and never asked.

The group usually meets at the Bancroft Ranch House Museum in Spring Valley. I heard a few ladies talking about the parking at the Marriott being $10, and one explained, "If you get your ticket validated, it will only cost you $3." I joked to one lady, "You wouldn't have to worry about the parking fees back in the horse-and-carriage days." She didn't laugh. But most of the women I talked to were very friendly and had a good sense of humor. One said, "We have meetings every other month. We bring objects or pictures and we talk for one minute on that."

"Yes. We share it with the group. It could even just be a hat."

I asked another if they watch movies from those periods of time. "Oh, yes. We had a meeting where we rented Titanic. And, once. Gone with the Wind. A lot of the people in our group are from the South. We do have two Brits in our group, but only one is here today."

I had a few hours to kill before my next party with the local chapter of Mensa. I told my friend this, and he just wanted to know about the "strippers from the old days." I kept telling him it was Victorian wear, and he said, "You're going from that to a Mensa party? From densa to Mensa."

A friend of mine in Mensa gave me Richard Lederer's number and I invited myself to his party. He's written over 30 books on the English language, my favorite of his titles being The Cunning Linguist. His most recent is A Man of My Words, which came out late last year. He also is heard on KPBS-FM hosting the show A Way with Words. Richard said, "I don't mind you coming to the party, but I'm just afraid you're going to write that we're a bunch of eggheads."

I walked into his Scripps Ranch home and was greeted by two Mensa members who told me a lot about the organization. One had a gorgeous wife whom he met at a Mensa meeting. The other, when I asked how many questions they know when Jeopardy! is on TV, said, "I was on Jeopardy! I won over $10,000." That guy. Bob Tutelman, was very interesting. We talked about music (he plays a few instruments) and Woody Allen movies for a long time.

Another guy named Robert looked like Albert Einstein (I don't know if that was on purpose). He said, "Oh, I read that column you wrote on the party in Pacific Beach. And the parties there are all just like that. I've seen them when I walk by down there."

There were a few of us on the back patio talking, and the conversation turned to funny puns and weird words in the English language. One of the guys asked, "What's it called when a word is spelled the same forward as it is backwards? Like 'race car7 or the name Bob?" For ten minutes nobody could think of it. Finally I said, "Is that a palindrome?"

It was, and I was proud of myself for knowing something that they couldn't think of. Although it was probably the only thing I knew that those few guys on the patio didn't.

Another guy found out I had worked in radio, and he told me about his days in radio back in Michigan in the '50s. He said, "That was back when we had to make our own money selling advertising time on the station. I usually did well. But I got fired when I played the Alan Dale song 'Cherry Pink (and Apple Blossom White).' "

I asked, "Weren't you allowed to play that?"

He replied, "No, what happened was, for some reason I said, 'This is "Cherry Pink and Asshole Blossom." ' I don't know why I said it." 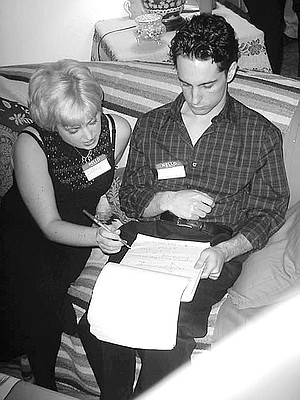 I saw one young, good-looking couple sitting on a couch. He was wearing a black leather jacket and had his hair slicked back like Fonzie. From behind, I saw them laughing, giggling, and being affectionate. When I got closer, I could see they were working on some elaborate math equation. Across from them, I saw two ladies in their 40s. One was wearing black leather pants and had a nice smile but didn't say much to me. The other one told me about her work for adult literacy.

Since I had pigged out on pastries at the Victorian party, I just glanced at the food here. There was a wide variety of desserts, appetizers, chips, fruits, and lots to drink. There was a dog running around near the food, and somebody was calling it. It didn't stop running or go to the person calling it. I said, "Obviously not a Mensa canine."

Everyone was wearing name tags, and I made mine by drawing Scrabble letters to spell my name. A number of people commented on it, and one guy gave it a close inspection to see if I had the correct point values.

There was one guy talking about Star Trek and other science-fiction things that kind of bored me. But I was pleasantly surprised at how much I enjoyed the conversation with everyone else (no offense, Trekkie, if you're reading this). One guy who looked to be in his early 20s told me he was at the last Liz Phair concert. Since I was there also, we talked about her and other musicians we liked.

Dave Gass came over, handed me a packet, and said I should think about taking the test to join. I said, "I was an SDSU student, and I did horribly on my SATs." Mensa used to admit people from SAT scores, but now it has its own test.

I read the brochure and learned that Mensa members are in the top 2% of intelligence in the population. I remember reading in People once that actors James Woods and Geena Davis are in Mensa (and just the fact that I read People should keep me out).

I ended up staying so late at this party that Lederer had to subtly hint for me and the last guest to leave his house by saying, "We have to start cleaning this place up.”

Another read, "What is the 11-letter word that all smart people spell incorrectly?"