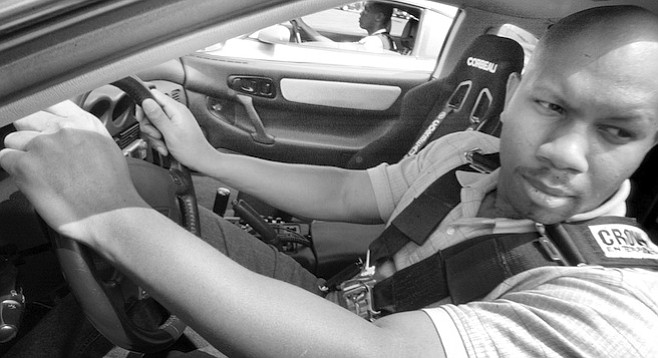 On a recent Friday night at 11:00 p.m., a lone policeman sits in his patrol car watching from 50 yards away a group of souped-up cars in the Target parking lot on Balboa Avenue. "It looks like they're gathering," says Johnnie, as we sit across the street in a nondescript station wagon, a vehicle calculated to attract the attention of neither the cars' young drivers nor the police.

Johnnie, 29, has been fascinated with drag racing since he participated several times in illegal street events in the early 1990s. Today he might still go out looking for a street race to watch late at night, though even watching one is now outlawed. On this evening he is acting as my guide to an activity that is dangerous yet compelling to a variety of San Diego residents.

Due to stepped-up police pressure and legally sanctioned racing at Qualcomm Stadium and the Carlsbad Raceway, fewer drivers race on the streets these days. But on any given evening, says Johnnie, races can materialize in several areas of town. They start when people cruising major boulevards in "hot" cars recognize other powerful cars. When a signal turns green, two drivers may squeal away from an intersection in a race for a 100- or 200-yard race down the street. Noticeable concentrations of potential racers in an area are likely to prompt them to gather in a parking lot. Then, if the risk of police attention seems small, they may suggest a secluded street to each other through open car windows or on cell phones to drivers still out on the boulevard or others who want to watch. Only the most trustworthy get the invitation.

After our stakeout on Balboa, Johnnie takes me on a tour of the more popular boulevards. We go first to Sorrento Valley Road, where a lowriding Civic is racing its engine at the first intersection off the 805. Farther east the driver of a turbocharged Subaru WRX pulls alongside a Corvette and glares through its passenger-side window at a rival. Nearer I-15, after we drop down Camino Santa Fe to Mira Mesa Boulevard, a driver seems to be chasing another as they easily pass us on the left. Everywhere Johnnie sees signs of gathering, but on this evening we will not find the elusive street race where small crowds watch and speeds surpass 100 miles per hour.

In the "good ol' days," says Johnnie, 200 people might have turned out to watch races at the most famous of all drag-racing sites in San Diego, the straight stretch of Kearny Villa Road south of Miramar Road. The quiet emptiness of the street tonight allows Johnnie to tell me some of its legendary events. One story claims a race started in darkness trapped a commuter, heading to work at daybreak, for 20 minutes in a line of cars waiting to race. The only way the driver could escape was to move along slowly with the racers until a ringleader in the middle of the road paired him with an opponent and brought down the starting flag.

Our tour ends on a lonely section of Camino Santa Fe north of Miramar Road, where one of Johnnie's friends witnessed a race that killed an innocent motorist on November 27 last year. The recent surge in drag-racing crashes, causing 16 fatalities and 31 injuries since the start of 2002, makes the memory of that evening "sit heavy on my mind every time," he says.

Despite the release in June of the movie 2 Fast 2 Furious, which glamorizes street racing, few aficionados admit to racing on city streets anymore. Most say that police pressure and legal sanctions make it too risky. A young man outside Pann Auto Performance on Ronson Road in Kearny Mesa, the most successful performance car shop in San Diego, says that he stopped "fooling around" with it after the death of a friend in a street race three years ago. "I had just gotten out of football practice at school," he says, "and I called to see if he wanted to catch a movie. He said no, and that's the last time I ever talked to him."

But a younger high school boy, his jeans slung so low they seem to be falling from his hips, confesses that he "drags" when he can. He knows about the risk of crashing but claims that in his own races so far, six or seven of them, he hasn't come close to a wreck. He loves the thrill of speed and what winning a race brings. "At school you're nobody," he says. "But when you beat a fast car on the street, word gets out. You get a lot of respect from that," he says.

David Vo is the manager and Brent Mastrocinque a sales representative at Pann Auto. They are fans of the legal venues for drag racing at Qualcomm Stadium and Carlsbad Raceway, where they encourage customers who have the interest to race. And they support police action against street racing. But Vo says, "Kids who go to Qualcomm sometimes get harassed by police after they drive away from the stadium." He resents the unprovoked pressure. Mastrocinque cites an incident in which police pulled his souped-up car over as he was leaving a gas station, only because there happened to be some drag racing going on in the area. He admits, though, that "a lot of the guys who go to Qualcomm probably race on the streets too."

Some performance-car enthusiasts find the legal racing venues too controlling, according to Earl Williams, 30, who has a ten-year-old passion for drag racing. So they go back to the streets. "A lot of times it's the younger crowd," he says. "They don't like the rules at Qualcomm. And their cars probably won't perform as well, meaning they won't look as impressive on the track as they would on the street. At the track, you have to concentrate on the starting line and on your launch. They check to see if your car is legal and safe, and they time the races. Some guys don't want to be seen as slow. One guy I know thought it was too controlled and started doing the streets again. Now, that same person, his car is gone. He wrecked it."

Williams drives a 2002 Dodge Stealth that he constantly modifies. He is leery of street-race risks and notes the more official version of drag racing at legal venues better prepares him to go professional someday. In what is only a hobby so far, he has learned to care properly for his car and to drive faster, taking a full second off his times at Qualcomm. He thinks that 80 percent of winning is due to the skill of the driver.

"I've seen a Viper run 14 [seconds] at Qualcomm," says Williams, "and it is supposed to run 12. A bad driver in a fast car won't run fast. Reflexes in getting off the line are important. And the shifting of gears. A lot of people who think they shift fast are shifting slow. And the rpms, when to change gears, that's a big part of it. The driver will make a car shine.

"But when a car is way more overpowering than another car, that's when the driver gets taken out of the picture. If one car has 400 horses and the other only 125, then, of course, no matter how bad the first driver is, he's going to eventually roll past the second one."

The longer the race, the greater the advantage of the more powerful car. And that points to one other disadvantage some drivers see at Qualcomm: its races are only an eighth of a mile long. And the car's horsepower is not the only issue. "If I had a front-wheel-drive car," says Williams, "I would not look good out there without certain things. Now they're allowing slicks, which makes it better. But it is still not a quarter mile. So you're going to stay in first and second gear. You could possibly hit third, but you're not getting into the high speeds."

Carlsbad Raceway does have a quarter-mile track, and its 10:00 a.m. to 5:00 p.m. schedule every Saturday gives racers more opportunities than Qualcomm, which, during baseball season, could only provide Friday-night races every two or three weeks. But the surface of Carlsbad's track is poor, says Williams; it doesn't have enough seating facilities for spectators, and people have to drive a dirt road to get there.

So street racing still seems destined to lure some people into taking the risk of killing innocent drivers as well as themselves. But, says Williams, "You have to look at the term 'street racer' in a bigger context. People will try to race you on the highway in any type of car to prove that they can beat you to a lane or to a spot. Age doesn't seem to matter. People have that urge.

"This morning," he continues, "I was trying to get in another lane on the freeway so I could get off on the ramp. A guy in an SUV supercharger, seeing my car, he says, 'I'm going to show him that I've got something.' That's what you call a street racer too. You've got to expand the whole picture.

"Every automobile manufacturer tries to express how good their line is through performance cars, like Mercedes AMG and the Mustang Cobra," says Williams. "Fast cars have always been attractive to many people. So now you have people modifying their SUVs. Things like that are common. Everyone likes the power and speed."