At 3111 feet of elevation, Sandstone Peak lies at the very top of the Santa Monica Mountains. The view from the summit is panoramic, with distant mountain ranges, the hazy Los Angeles Basin, and the island-dimpled surface of the ocean occupying all 360 degrees of the horizon.

The peak lies within Circle X Ranch, formerly owned by the Boy Scouts and now a part of the Santa Monica Mountains National Recreation Area near Malibu. The following hiking route, a 5.8-mile loop on narrow trails and old fire roads within the ranch, includes a visit to the peak itself. If the late-summer heat is too intense, as it is on some days, pick a three- or four-hour block of time either early in the morning or during late afternoon.

You'll start hiking at a large trailhead parking lot on the north side of Yerba Buena Road, one mile east of the Circle X park office. This same point is 6.4 miles north of Pacific Coast Highway and 4.5 miles west of Mulholland Highway. (Either way you face a white-knuckle drive on the paved but very narrow and curvy Yerba Buena Road.)

Proceed on foot past a gate and up a fire road 0.3 mile to where the marked Mishe Mokwa Trail branches right. On it, you immediately plunge into tough, scratchy chaparral vegetation. The hand-tooled route is delightfully primitive but requires frequent maintenance to prevent overgrowth. You'll make intimate acquaintance with mosses and ferns and several of the more attractive chaparral shrubs: toyon, holly-leaf cherry, manzanita, and red shanks. You'll also pass several small bay laurel trees. After about 30 minutes on the Mishe Mokwa Trail, note the amazing balanced rock that rests precariously on the far wall of the canyon below you.

By 1.7 miles from the start you will have worked your way around to the north flank of Sandstone Peak, where you suddenly come upon a couple of picnic tables and "Split Rock," a fractured volcanic boulder. From then on, you continue on a wider trail (an old fire road) heading west. You pass beneath some hefty volcanic outcrops and eventually circle south, passing a trail campground (2.8 miles) on the left.

Ignoring side trails on the right, keep following the old fire road as it curls upward and east, passing Inspiration Point (a 50-yard side trip to the right). Then, just beyond two closely spaced hairpin turns in the road, find and follow the slippery path to Sandstone Peak's windswept top. A plaque on the summit block honors W. Herbert Allen, a long-time benefactor of the Scouts and Circle X Ranch. The name "sandstone" is a misnomer: the peak itself and the Boney Mountain ridge it lies on consist of sand-colored rock of volcanic origin.

To complete the loop, return to the old fire road and resume your travel eastward. One and a half miles of twisting descent will take you back to the trailhead. 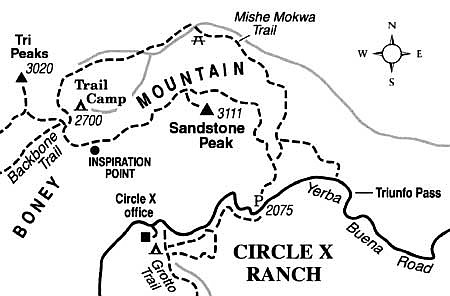