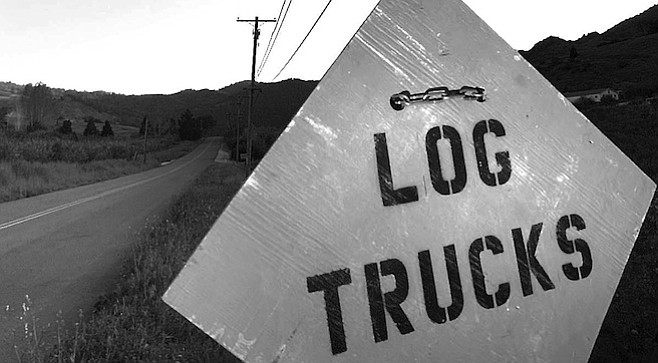 "Coulter pine has virtually no value. Incense cedar does have some value."

These days, Julian residents are seeing something that hasn't been seen in those parts for three decades: logging trucks laden with local logs growling down the mountain roads and returning empty. "Everybody in the community has seen these trucks rolling," says local naturalist Clinton Powell. "There's a big sign right on Farmer's Road that says 'Caution: Log Trucks.' " 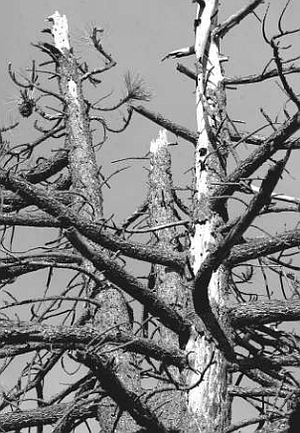 Beetle-infested Coulter pines, Julian. In normal conditions, the trees defend themselves from the beetles by encasing the bugs and their larvae in sap.

The rumor mill has already turned out tales of Northern California logging professionals being surprised and excited by the mature stands of timber. Another rumor has a saw mill being put up soon.

The logging started late last year on the slopes of 6500-foot Volcan Mountain within the borders of the 10,000-acre Rutherford Ranch. At first, Powell says, "They cut the trees out of the area on the east side of the mountain that were burned in the Pines fire. Now they're taking from an area on the western portion of the mountain that is owned by Mr. Rutherford. Gosh -- just priceless, priceless beautiful trees.... It's a shame that this kind of thing is going on."

According to Powell, about four trucks a day come down off the mountain carrying the trunks of "incense cedar, white fir, and coulter pine. Those are the three main species of tree they are cutting."

The trucks are hauling the wood west, down the hill to Santa Ysabel, then north on Highway 79 through Warner Springs and finally to the Corona Ranch sod farm on the east edge of Temecula. There, by means of an articulating loader fitted with two giant claws, the logs are taken off the trucks and stacked in piles 20 feet high. On a recent Thursday, 300 to 500 logs lay on the roughly two-acre corner of the sod farm as the loader, looking like a giant yellow lobster, clawed the logs off a truck just arrived from the mountain. In the middle of the unwooded Temecula Valley, the piles of tree trunks look out of place. But it's only a stopover for the logs. From there, they are loaded onto flatbed trucks and taken to Northern California. The logging company undertaking the operation is Elco Logging out of Nevada City, California.

Some in the Julian area worry that whole sections of the mountain will be clear-cut. And, though they wouldn't comment, officials from the Department of Fish and Game and the Volcan Mountain Preserve -- both of which are in the midst of buying some of the logged area -- could be concerned about what state the land will be in after they buy it.

But Thom Porter, a professional forester employed by the California Department of Forestry, says there will be no indiscriminate clearing of the forest in Julian. "Yes," he explains, "there is logging going on up there, but thus far, all the logging is permitted and meeting the guidelines of [the California Environmental Quality Act].

"Back in 1973," Porter explains, "the Forest Practice Act was enacted by the state. The act required that all logging projects conducted on state and private lands or nonfederal lands must comply with CEQUA."

A subsequent bill passed by the state made the rules of the Forest Practice Act part of the California Environmental Quality Act. The Forest Practice Act stipulated that a "timber harvest plan" must be filed with the California Department of Forestry before any trees are felled on state or private lands for commercial purposes. "The California Department of Forestry is the lead agency and enforcing agency on this," explained Porter. "Should a landowner want to harvest trees for commercial purpose off of a land that is not damaged in some other fashion -- by fire, earthquake, flood, wind event, insects -- then they would have to fill out an entire timber-harvest plan, which would be the equivalent of an environmental impact report for the purpose of harvesting trees."

But in this case, Phillip Rutherford, owner of the land being logged, did not have to fill out a timber-harvest plan. "When a substantially damaging event occurs," Porter explains, "there is an exemption that exempts a landowner from going through the cost and the time that is required to put together a timber-harvest plan in order to capture the value that is being lost with every day that dead trees stand unharvested. That is the format that was used and the permit process that was used for the first harvest on Volcan."

The first harvest that Porter speaks of was from the east side of the mountain where the Pines fire burned last summer. "[Rutherford] is the one who initiated the project of removing the trees," Porter says, "partly for hazard reduction, partly for helping to get somebody in with the right equipment to be able to clean up some of the vast quantities of what would have been just wind-fallen trees so that it does not become a horrible mess of dead, fallen timber. So that permit was specifically for the fire area."

But locals such as Clinton Powell say they see unburned trunks on the trucks rolling down off the mountain these days. "There is another permit available," Porter explains, "that [exempts the landowner from] the process of doing a timber-harvest plan process in the event that you have dead and dying trees due to insects and disease."

Anyone who has been to Julian in the past couple of years has seen the numerous dead pines in the area. Most of them are Coulter pines that have been killed by boring beetles. In normal conditions, the trees defend themselves from the beetles by encasing the bugs and their larvae in sap. But due to below-average rainfall since 1998, the trees haven't been able to produce enough sap to perform this process, and they are dying at an alarming rate. "There has not been this kind of a devastating die-back of trees [in this area] in recorded history," Porter says.

"The [Rutherfords]," he continues, "applied for a permit to remove trees that are dead, dying, and diseased in a specific area of Volcan Mountain with the same interest in mind; removing a hazard that is going to be there."

But even then, the area will not be clear-cut as some in Julian worry it will be. The permit "is a 10 percent dead, dying, and diseased tree-removal permit," Porter says. "That allows somebody -- as long as the trees are dead, dying, or diseased -- to take up to, but not greater than, 10 percent of the volume of timber off of the land."

If more than 10 percent is dead, diseased, or dying, "Then you have to apply for a substantially damaged timber land permit," Porter says. "Then you need to certify to the state that you have got a bigger and worse problem than 10 percent."

On top of having a certified forester determine which trees will be cut, the forestry act requires that the Department of Forestry inspect the operation before and during the logging.

As to the rumor that logging companies are being lured to the local mountains by stands of valuable timber, Porter says it couldn't be. "Coulter pine, which is the most common tree up there, has virtually no value. Incense cedar does have some value. White fir has little value. Jeffrey pine has pretty good value if you get it before it gets a blue stain, which is considered to be a defect. As the tree dies, a certain insect cultivates fungus inside of the wood, and that seeps through the wood, and it stains the wood blue. That is considered a defect, and it drops the value. I can tell you right now that when this current episode of tree-removal opportunity goes away, we likely won't see logging here for another 50 years. The industry just isn't here to support it."