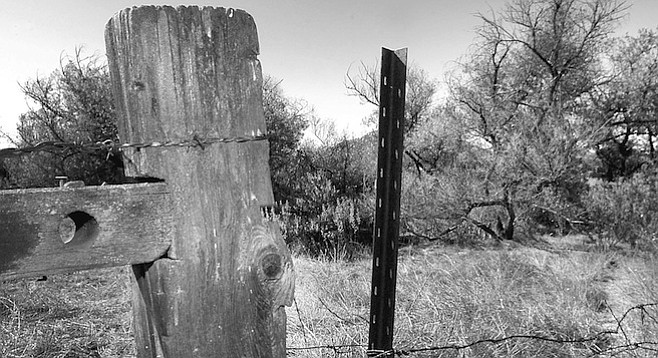 Broad, open grasslands in the topography of San Diego County are the exception to the norm, which is chaparral-covered mesas and barrancas. And most of the natural grasslands, Mission Valley for example, have been developed. Two notable exceptions are the plains northeast of Lake Henshaw and the Ramona grasslands west of the town of Ramona. And a recent purchase by the Nature Conservancy, a wildlife conservation group, will ensure that at least part of the latter stays undeveloped.

In the 1940s, actor James Cagney and his brother purchased more than 500 acres on the southeastern end of the Ramona grasslands. In those days, Ramona was a remote country town known for its turkey ranches. But the land Cagney bought was in the middle of a broad, grassy valley floor where sheep and cattle grazed. Chunks of the property were sold over time, but 417 acres of it remained in a trust run by the Cagney family. It was from that trust that the Nature Conservancy, for $2.6 million, bought this remaining 417-acre parcel.

Scott Morrison, a senior ecologist with the Nature Conservancy, tells the story. "The Nature Conservancy identifies its conservation priorities using a very broad-scale, comprehensive scientific analysis, and through that analysis we identified the Ramona Grasslands as one of the highest conservation priorities in the state. Because big, expansive grassland valleys in Southern California just don't exist anymore...because they are flat and highly developable. So, going on about three and a half years ago, we began an extensive conservation plan for the area, trying to figure out how we could identify sustainable conservation areas and sustainable development areas within the grasslands. We recognized that there are a few key large landholdings that are in the core grasslands area. And the Cagney property is right in the heart of what we hope to be a much larger grassland preserve.

"The Cagney property is important for a lot of reasons," continued Morrison. "It has a very high concentration of threatened and endangered sensitive species, but it also has a number of habitat types that are very endangered in Southern California. Vernal-pool habitat, grassland habitat, riparian habitat make for this really extraordinary concentration of rare species."

For the past decade, studying these rare species has been the work of a group of biologists at the Wildlife Research Institute, which maintains a field station in an old farmhouse on ten acres. It's bordered on three sides by the Cagney Ranch and on the fourth by Highland Valley Road, near its intersection with Rangeland Road. "This actually used to be part of the Cagney Ranch," says biologist Dave Bittner, who works out of the station. Standing in the shade of an elm tree next to the house-turned-research-facility, Bittner looks north over the grassy plain baking in the sun. Hot air rising off the golden grass ripples the light and makes the stationary cows across the valley appear to be dancing. To the northwest, three or four miles across the plain, planes lift off from Ramona Airport's runway. "In the wintertime we have a tremendous migration of northern hawks and eagles that come in here," Bittner says.

Asked what they come for, Bittner points to a plywood box hanging in the tree above his head. "That's a barn owl box," he says, then points to the ground underneath the box. "And we have been collecting what we call the pellets down here."

Bittner squats down and picks up a clump of hair and bones about the size of a golf ball. "The owls don't digest the bones and hair, so they spit this whole thing out. We have a researcher here who pulls the pellets apart and identifies the bones. Here's a leg bone, probably from a gopher...here are some very long gopher teeth. In the wintertime we get a big migration of burrowing owls. This is ideal habitat for them, but we have had a drought, and the ground-squirrel population has been down, so there hasn't been as many ground squirrels, so there are not as many burrowing owls. But the gopher population is tremendous; you can tell by the way the ground is all torn up. These animals love the gophers. It is a nice, symbiotic relationship; lots of prey, lots of predators. We've got lots of coyotes, lots of bobcats, foxes, and, of course, lots of hawks. Then there is a pair of golden eagles that hunt mostly the northwestern side of these fields; they hang out on the rock formations out there in the field."

Occasionally, researchers at the Wildlife Research station find among the gopher bones the remains of a Stephens' kangaroo rat. Closer to a mouse in size, the kangaroo rats have long tails and hop about on their hindlegs searching for grass seeds. They're an endangered species. "In San Diego County, they're only found here and in one other place a little north of here," Bittner explains.

The other endangered species of note in the grassland is a type of shrimp. Bittner explains, "We have vernal pools out here that have their own unique habitat. As you look out across the plain here, you can see depressions in the valley floor. The ones that don't drain, whenever we have a wet year out here, they fill up, and they sit there for maybe six months. And all kinds of organisms, such as these fairy shrimp, hatch and live while the pool is full of water, and they lay eggs before it dries up in the summer. The eggs are actually in the ground, and they have been known to be able to live for a 100 years in the ground as an egg waiting for a good rainfall year."

When they do hatch, Bittner says, "They serve as a tremendous food source for waterfowl. Whenever there is a little bit of rain out here, we have ducks everywhere eating these shrimp and all the other organisms. The pools are also a great source of protein for migrating shorebirds that probe in there and get all the little insects that are hatching out."

Bittner says it was the birds of prey, or raptors, that drew him to the Ramona grasslands. Two pairs of golden eagles -- which need wide, open grassland to hunt in -- live here year round, along with red-tailed and red-shouldered hawks, kestrels, merlins (small falcon species), as well as barn and great horned owls. "The golden eagle," Bittner says, "is declining in this part of the country pretty severely. Having those two pairs here is pretty unique, and we can preserve those pairs if we can preserve this grassland."

Species of migrating raptors, which can be seen in the Ramona grasslands in winter, include bald eagles, burrowing owls, peregrine falcons, and prairie falcons. "Starting in December, through February, on a typical day, you could see 13 or so species of raptor," Bittner says.

"Feruginous hawks," he adds, "are the neat hawks we have out here. We get more of these here than anywhere else in Southern California. This is the kind of territory they like -- open grassland with little hills to sit on. Most of them are from Northern Nevada, Utah, Colorado, Wyoming, and parts of Montana."

Bittner adds, "Feruginous hawks are a species that is declining throughout the western United States, and one of the reasons is they need wintering range, and that's one of the things that they're losing. We have that here. On a winter day here, you can see 12 of them flying around."

The $2.6 million used to purchase the land from the Cagney Ranch was a mixture of private and public money. The state supplied about $1.4 million, and the federal government granted the Nature Conservancy $660,000 for the purchase. The balance was made up of privately raised money.

According to Morrison, the Nature Conservancy plans to turn the land over to the county to be a nature preserve with "passive recreation use: hiking, bird-watching, but not overnight camping, not hunting, not vehicles."

As part of the deal, the county will reimburse the conservancy the million dollars that private funds spent on the land. That million should be covered by a recent grant of $1.5 million from the Regional Water Quality Control Board to the county for the purpose of restoring Santa Maria Creek, which runs through the Cagney property on its way to Lake Hodges.

Though the Cagney Ranch is only 10 percent of what Morrison calls the "core grassland," he believes the purchase is a major step toward preserving the whole habitat. "Usually in these kinds of deals, the conservation accomplishment is the hardest because people are wary. They are not sure that it is really going to happen. But we are hopeful that the Cagney acquisition will be the first domino of meaningful conservation in the Ramona grasslands."

The rest of the grassland is broken into plots as large as 1100 and 1600 acres possessed by only four or five longtime owners. That fact is a source of optimism to those who would see the habitat preserved. "If it were divided up into little tiny parcels," Bittner says, "there would be no way that you could afford it. Large parcels like this will sell for somewhere in the neighborhood of $6000 to $8000 per acre. Whereas, if you were to buy it all divided up into little lots, you would pay $50,000 for a lot. And it would be such a patchwork."

Bittner has met all the other grassland owners and says of them, "It becomes a battle between their emotions wanting to preserve it and the dollar figure. Most of them are willing to concede the dollars a little bit if they know it's going to be preserved. But we haven't yet had one walk up and say they'd like to donate the whole parcel. That would be nice, but the fact is, all these land stewards have had their land, with just a couple of exceptions, for many generations in their families. So they have a feeling for it. And they have an interest in seeing it maintained."