San Jacinto Peak ranks a close second after San Gorgonio Mountain on the roster of Southern California high points, but its more sharply defined and imposing bulk makes it instantly identifiable from almost anywhere. Upon witnessing the sunrise from the summit one morning, the famed naturalist John Muir exclaimed, "The view from San Jacinto is the most sublime spectacle to be found anywhere on this Earth!"

Despite his propensity for superlatives, Muir may have been right. We may never know. Since his visit in the 19th Century, more than 20 million people have come to settle within a 150-mile radius around the mountain. Air pollution dims today's view, even on the clearest days. Still, hundred-mile visibility is not uncommon -- out to the Channel Islands in the west, down to the northern sierras of Baja California to the south, and east into Arizona. San Gorgonio and the San Bernardino Mountains rear up in the north, 15 to 20 miles away, blocking vistas of the Mojave Desert.

Every summer, thousands of people take advantage of the "easy" trail to San Jacinto Peak, six miles one way from the mountain station of the Palm Springs Aerial Tramway (8516 feet) to the summit (10,804 feet). Well-conditioned hikers accustomed to high altitudes will find this a moderate trip. Others, including those with modest or no goals, can still get plenty of pleasure out of shorter trips that don't stray very far from the mountain station. The slopes hereabouts feature some of the most inviting high-country forests and meadows south of the Sierra Nevada.

First, drive up Tramway Road north of Palm Springs to the lower station of the tramway, elevation 2643 feet. After purchasing a ticket (good for the round trip), ride the tram to the mountain station, which features such amenities as a restaurant and a gift shop. A paved pathway leads 0.2 mile down from the station to the San Jacinto State Wilderness ranger hut in Long Valley, where you must obtain a wilderness permit for any travel beyond Long Valley.

From the ranger hut, follow the wide trail leading toward Round Valley (about 2 miles) and Wellman Divide (3.3 miles). At Wellman Divide you turn (right) north. The never-too-steep climb ahead takes you through thinning timberlands to a junction just south of the summit. Veer right, follow the steeper path up along the east side of the summit, pass a stone hut, then scramble from boulder to boulder for a couple of minutes to reach the top. Hopefully the weather will allow you to rest a spell in the warm sun, cupped amid the jumbo-sized rocks, and savor the lightheaded sensation of being on top of the world. Make sure that you leave the summit of San Jacinto Peak in time to hike back and catch the last downhill tram ride. 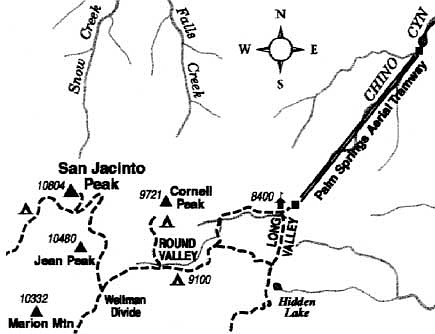