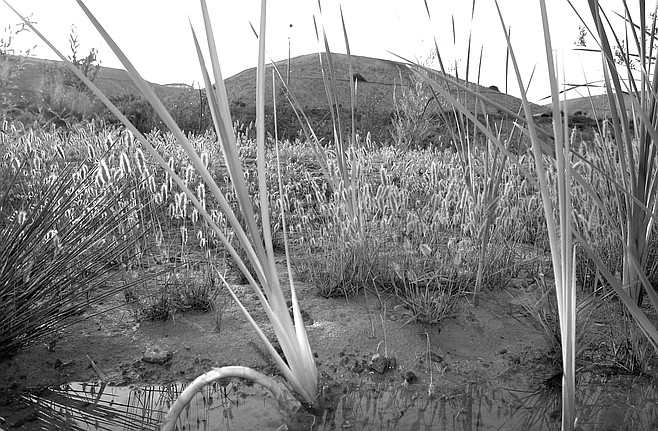 How long is forever? As it turns out, forever is about two years, or so people in Chula Vista were recently surprised to discover. In March 1996, the County of San Diego and the City of Chula Vista approved the open-space plans for the 23,000-acre Otay Ranch development. As part of the agreement, the landowners, then known as the Baldwin Company, were required to set aside more than half the land for open space and habitat. The agreement was "irrevocable" and "in perpetuity."

Using as their guiding principle getting the most important habitat first, the two government agencies agreed to allow development to proceed if the property owner would first set aside 1248 acres of "the most sensitive areas on Otay Ranch." An area most people refer to as Salt Creek.

County planners call Salt Creek a "keystone" area because it contains a high density of the habitat and wildlife necessary for a preserve. Biologists say it will improve the habitat for animals — such as the American badger, grasshopper sparrow, prairie falcon, and white-tailed kite — as well as plant life, including coastal sage scrub, freshwater marshland, and various types of grasslands. Salt Creek is located near Wueste Road and adjacent to Otay Lakes Park. It connects other larger pieces of habitat, creating wildlife corridors that offer a biological benefit.

The deal to preserve Salt Creek was straightforward: Baldwin would build homes, and in return, it would set aside land for habitat. Environmentalists signed off on the deal.

Soon after incurring this open-space obligation, Baldwin went into bankruptcy reorganization in 1996. Then it spun off its land in a few different directions. In May of 1997, Baldwin returned 486 acres of the Salt Creek area to the former property owner, the Mary Marshall Rand Birch Patrick Estate. Six months later, Baldwin turned over to the rest of its creditors the remaining 762 acres of the Salt Creek open-space area — the area Baldwin had promised to set aside as open space.

Baldwin's hope was that the City of Chula Vista and the County would allow it to substitute other land — further away and with less value as habitat, environmentalists say — and thus be relieved of its obligation to set aside Salt Creek. And for a while, it almost got what it wanted.

In 1998, the City of Chula Vista agreed to go along with the Baldwin-successor's (still controlled by the Baldwin family) plan to forgo this obligation and not donate the land that was supposed to be set aside "in perpetuity."

The City of Chula Vista said Baldwin could go find other land for the birds and plants. This was a dramatic shift for Chula Vista planning bureaucrats, who just two years before were extolling the benefits to Chula Vista of setting aside the "keystone" Salt Creek open space for San Diego's Multiple Species Conservation Program (MSCP).

But there was a catch: the County of San Diego had to sign off on this disappearing habitat plan as well. And the county had never even heard about the change. 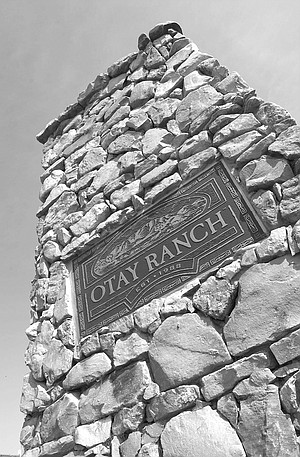 In 1999, county planning commissioner Michael Beck, the father of the conservation program in San Diego, was listening to public testimony by Rick Rosaler of Chula Vista's planning department when Beck began to smell a rat: Beck asked if Chula Vista was unilaterally changing the open-space agreement between the city and the county at Otay Ranch.

Rosaler said the city was not changing the open-space agreement at Otay Ranch, it was just going to "modify it." Then he tried to change the subject.

But other commissioners would have none of that and returned to Beck's question. Then-commission chairman Leon Brooks said he was "disturbed" that the City of Chula Vista thought it could "do something different than what we had all agreed to initially" — a pact then-supervisor Brian Bilbray said could not be changed because it was "set in concrete."

Rosaler tried to explain that Chula Vista was an "incorporated city that has its own rights and abilities...."

Brooks cut him off and reminded Rosaler of the agreement that he said Chula Vista was trying to "undermine" with its unilateral changes to the area's open space acquisition plans.

Soon after, Rosaler retreated, telling planning commissioners that he did not come for approval of Chula Vista's changes to the conservation program, he just came to give them a "status report."

And that is where it stood until earlier this year, when the City of Chula Vista and the property owners decided they needed to go to the County to get the County's approval. All this after selling 5200 homes and taxing the homebuyers to pay for the upkeep of this land.

This is an approval county officials are in no hurry to grant — if at all.

Now the Baldwin-successor company and its partners are back in front of the County, trying to explain why it should not have to acquire the most important piece of habitat in South Bay. It should be a good story — one that people in other parts of San Diego and California have heard before. Often to their regret.

Before its bankruptcy, Baldwin was one of the larger homebuilders in America. It was also in court most often.

In Orange County, public officials took the unprecedented step of threatening to file foreclosure if Baldwin didn't make good on $600,000 in back taxes. In Anaheim, Baldwin had to be forced to complete a $1.5 million park it promised to its own homeowners.

Former company executives successfully sued Baldwin and were awarded millions of dollars at trial after the company refused to live up to a profit-sharing program. Later, the judge found that Baldwin representatives had lied at the trial about its finances. 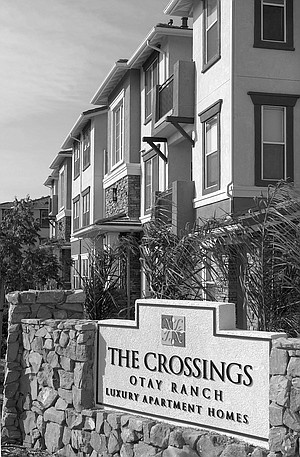 The broker who sold the land at Otay Ranch to Baldwin had to sue to receive her fee.

In Carmel Valley, some homeowners say that Baldwin's problems prevented it from completing improvements and parks. Lee Klausen, a neighborhood activist, had been after Baldwin for years without success to live up to its commitments in Carmel Valley. Finally, rather than see the open space and other land degrade, the city took over much of the property.

According to Lisa Ross, writing in the Carmel Valley News, "The good news is...the city is in control of these former Baldwin properties. The bad news is that the city taxpayers are stuck with a bill...that was the responsibility of [Baldwin]. But more significantly, Baldwin also ran out on their obligation to bring half of a ten-acre linear park under the SDG&E power lines up to a standard that would allow the city to take ownership. At current costs for developing parks, that means a million dollars or more for grading, irrigation, and environmental mitigation is necessary before the area can qualify for park development funds. Unpaid subcontractors are seemingly everywhere."

Baldwin companies have always been a family operation. Starting out on a chicken ranch in Temple City in 1956, Al and James Baldwin built their first house after their father converted their chicken ranch into a subdivision. The brothers, still teenagers, literally built the house with shovels and pickaxes.

As the company grew and the boys took over, they moved their operations to Orange County, becoming one of the largest builders in Southern California and San Diego. Real estate booms and busts of the 1970s and 1980s may have taken their toll on other privately held builders, but Baldwin held on, helped by a $150 million junk-bond deal it offered in 1993.

More than 75 percent of that money went to pay existing debts, draining more than half of the company's cash flow to repay the high-interest loans, says the Los Angeles Times. Despite the fiscal turmoil, the Times reported the brothers maintained their "lavish," high-adventure lifestyle.

By 1995, the dominoes started to fall, with Baldwin defaulting on multimillion-dollar pieces of property all over Southern California and finally entering bankruptcy, where the brothers lost control of at least part of the company. But they did keep control of much of the land at Otay Ranch.

When Baldwin acquired the 23,000-acre project in 1989, the Baldwin brothers claimed everything was just fine with their company. The owners of Otay Ranch carried a $70 million mortgage for the Baldwin company even as Baldwin was defaulting on other obligations in Carmel Valley and other places. Baldwin would default on that obligation as well. The Baldwin brothers may have lost control of their homebuilding company in bankruptcy, but they retained an interest in the company that bought the property at Otay Ranch, the same company that agreed to set aside thousands of acres of open space for habitat. The same company that now doesn't want to keep that promise.

The Baldwin-controlled company says that because it got rid of the land, it would be too difficult to reacquire (although Baldwin did have an option to purchase the land, it allowed the deadline to pass without completing a sale). Baldwin wants to contribute open space that is much less vibrant and is more than three miles away.

The Baldwin brothers who used to run the Baldwin Company and who now control much of the land at Otay Ranch say they should not be held accountable for the actions of their former company -- even though the same people control this company.

Environmentalists say a lot more is at stake here than just the Baldwins and their controversial companies. If the Baldwins are allowed to change the deal so late in the game, this decision will be a blueprint for other landowners to do the same thing all over San Diego.

"The decision to build homes on some of the finest open space in San Diego was not arrived at casually," says one open-space advocate. "But many people supported this plan only because it included provisions for open space and the conservation program. These plans that are now being thrown away because a property owner is hoping local politicians will not hold them to its promises -- promises other property owners in the county keep as a matter of honor. Promises Baldwin breaks as a matter of routine."

The 5000 homeowners at Otay Ranch pay a monthly fee that includes money for open-space preservation and maintenance. The 1250 acres that Baldwin wants to shed are part of that agreement.

Also part of the original agreement was a plan to give a toll-road company the right-of-way at no cost through part of the 1250 acres necessary to complete Highway 125, a crucial east-west link in the South Bay. But if the county undoes the deal, the toll company will have to spend millions to acquire the right of way -- threatening to undo another deal that everyone -- except Baldwin -- thought was signed, sealed, and delivered forever.