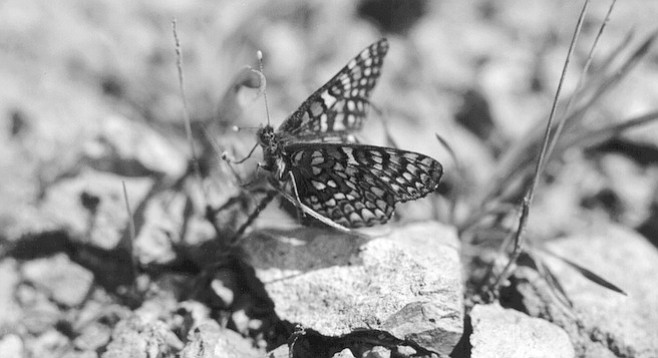 U.S. Fish and Wildlife Service in Carlsbad in charge of him

I am standing on Otay Mountain looking west. It is a warm day in early March, with a slight breeze off the ocean to break the morning stillness. Downtown San Diego is in the distance beyond the barbed-wire fencing of Donovan State Prison. To the south is the border and Tijuana. The hillsides burst with color — yellows, whites, blues, and pinks from golden eardrops, San Diego sunflower, deerweed, wild onion, popcorn flower, blue-eyed grass, and Cleveland's shooting star. While every color in nature is represented in the carpets of flowers before me, it is an inconspicuous plant known as dot-seed plantain that brought my colleagues and me here. Plantain is one of the food plants for the endangered Quino checkerspot butterfly, and today we've come to chase it. 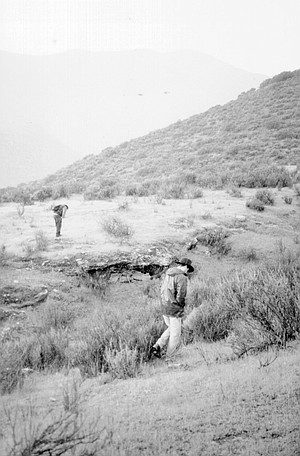 Gordon (background) and Eric look for Quino in Marron Valley. "We head to the hill Chris has dubbed 'Quino Point.'"

The Quino checkerspot butterfly is about two inches long from wingtip to wingtip. The wings are covered with thousands of dark brown, red, and yellowish scales creating a checkerboard of colored spots, hence the name checkerspot. The colors and patterning are striking, even to a novice like me.

The Quino checkerspot may have been one of the most abundant butterflies in San Diego, Orange, and Western Riverside Counties during the early part of the 20th Century. Even as late as the '70s, biologists would talk about driving to Otay Mesa and having hundreds of Quinos smashed against their windshields at the end of the day. Today the Quino has been reduced to seven or eight populations in southwestern Riverside and south San Diego County. Referred to as the "passenger pigeon" butterfly, this once-common and widespread species has dwindled toward extinction. This decline and the few remaining populations prompted the federal government to list the Quino checkerspot as an endangered species on January 16, 1997. 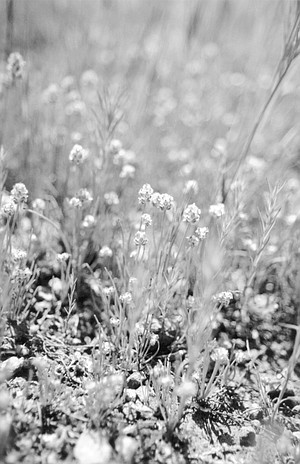 "We've found several large patches of plantain but no Quinos."

Hans Herman Behr was the first entomologist to describe the Quino checkerspot, from a specimen he collected in coastal San Diego County in 1863. As I look across the urbanizing landscape, wondering how the San Diego County Behr explored compares to what I see today, the quiet is disrupted by the clamor of my colleagues shouting names of butterflies: "Lady," "Buckeye," "Orangetip," "Swallowtail." Once a name is shouted out, other team members confirm the observation by shouting back. 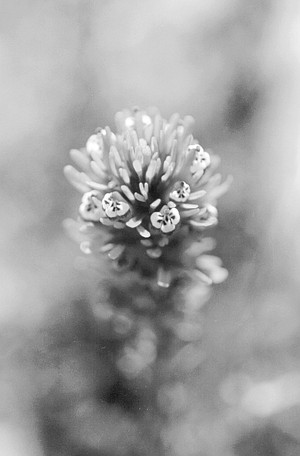 Owl's clover. A single female will lay up to 1200 eggs in masses around the larval food plants plantain and owl's clover.

We are not seeing any Quinos, and Chris Nagano suggests we head to an adjacent ridgeline. Nagano is the staff entomologist for the U.S. Fish and Wildlife Service in Carlsbad; he's responsible for determining the status and recovery of the Quino checkerspot. Nagano's colleague, Eric Heins, has worked on many species in Colorado, New Mexico, South Carolina, and Alaska. The other two members of our group are Gordon Pratt and his wife Cissy. Gordon, a Ph.D. from U.C. Riverside, is evaluating Southern California for potential Quino habitat. Big, barrel-chested, with boundless energy and a baritone chortle, Gordon doesn't look like your typical entomologist. He's been collecting and studying butterflies since he was a year old and can often identify a species by how it flies.

At its early stage, the Quino checkerspot is a caterpillar or larva. The adult stage is spent as a butterfly after emerging from the pupa, or chrysalis. A single female will lay up to 1200 eggs in masses around the larval food plants plantain and owl's clover. Although a caterpillar looks soft, its skin is quite inelastic. Because of this, it must molt its skin periodically as it grows. Each stage between molts is called an instar.

As the summer approaches, the caterpillars stop growing and undergo a summer hibernation. This hibernation, or diapause, allows the caterpillars to survive the hot summer when their food plants have dried up. Many caterpillars will re-emerge from diapause with the late fall or winter rains and the return of food plants. Some will continue to stay in diapause until habitat conditions are more favorable — sometimes as long as six to eight years.

After emerging from diapause, the caterpillars will continue to grow and then enter their pupal stage, when it undergoes transition to the butterfly. For the Quino checkerspot, this process will last about two weeks, after which the adult butterfly will emerge to feed, disperse, reproduce, and then die. Butterflies become active when the air is warm, the breeze is light, and there is no rain. Adult butterflies begin to fly in late January to mid-May. By the middle of May, the females will have laid their eggs and started the next generation of Quino checkerspots.

We've found several large patches of plantain but no Quinos. Turning over a few rocks confirms our fears: sowbugs. These non-native insects prey on butterfly eggs and along with earwigs are thought to contribute to the decrease in Quino populations. But sowbugs and earwigs are only part of the story. Like most endangered species, habitat destruction and degradation are also causative factors. It's estimated that between 50 and 75 percent of the Quino checkerspot's habitat has been lost since 1900. Agriculture and urban development have removed potential habitat, while unregulated grazing has continued degradation. Non-native Mediterranean plants, such as wild oats and bromegrass, are displacing the Quino checkerspot's food sources.

We decide to head east, over Otay Mountain, to city-owned property in Marron Valley. The truck trail yields incredible views, hairpin turns, and steep drop-offs. As you reach the peak of Otay Mountain, the vegetation changes; chaparral and sage scrub give way to Tecate cypress forest. Brilliant yellow bush poppies and mountain misery's white flowers dot the hillside between stands of cypress. The road narrows toward the peak of Otay Mountain, as the topography drops off into steep ravines that cascade south into Mexico. In the distance, a thin ribbon of Tijuana River cuts through the hillsides on its way to the Pacific Ocean.

Thanks to El Niño rains, the road into Marron Valley is rutted. The Border Patrol regularly does repairs, which keeps it passable between washouts and landslides. Marron Valley is not open to the public; gates prohibit unauthorized access. The road is patrolled by Immigration and Naturalization Service (INS) agents in green-and-gold-trimmed four-wheel-drive vehicles. Every few minutes they drive by, noticing our U.S. government plates.

Marron Valley's 2850 acres, once considered for a reservoir, are now preserved for wildlife under the city's Multiple Species Conservation Program. A small ranch house is the sole structure in the valley. Adjacent to the house are some paddocks where a few cattle graze on grasses thick from winter storms.

Last year Chris stumbled onto a population of Quino checkerspots here, now the largest remaining population in San Diego County. We head to the hill Chris has dubbed "Quino Point." Hills are important to the Quino checkerspots. Like several other butterfly species, Quino checkerspots aggregate on sparsely vegetated rounded hilltops, ridgelines, and rocky outcrops. In a behavior called "hilltopping," the male butterflies form territories and chase away other males and species of butterflies. It makes trying to locate particular butterflies very convenient.

Quinos are not impressive flyers; they waft along a few feet off the ground. But when another butterfly enters their turf, they're jet fighters racing into aerial combat. I watch as a Quino chases away a swallowtail twice its size. Chris says Quinos are butterflies with attitude.

I watch one Quino land a few feet in front of me and spread its wings. Basking on bare areas of ground is common behavior for this butterfly, making positive identification easier. I screw on a close-up lens and advance a few feet toward the Quino. I shoot off a few pictures; he seems to pay me no attention. I finish a roll of film and put my camera away. Still no movement until a painted lady butterfly crosses overhead, and then the Quino is off, chasing away the intruder.

It's after 3:00 and getting cold. The Quinos are starting to roost for the night, saving their energy for tomorrow. We lock the last gate behind us, leaving the Quino checkerspot, we hope, for another day.