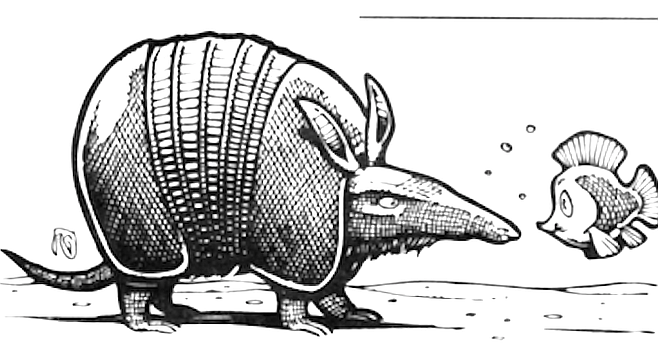 Six or seven minutes underwater is not out of the question

Mr./Ms. Matthew/Alice: Perhaps you could resolve a lingering dispute between a friend and me. He insists that armadillos cross streams by holding their breath and walking along the bottom until they reach the other side. This seems as problematic as it does improbable. What do you know about armadillo aquatics? — Mike Klausen, San Diego

Problematic for you, maybe, but just another stroll for the ’dillo. Though it may look like an ambulatory football, the U.S.’s nine-banded armadillo has quite a gymnastic repertoire. A Georgia town used to hold armadillo Olympics to showcase the animals’ running, jumping, and swimming skills. From a flatfooted stance, a startled armadillo can jump about three or four feet. Digging tunnels is what they do best, but that doesn’t have as much spectator appeal. ’Dillos like water.

A swimming armadillo overcomes his ballast problem by swallowing air for buoyancy and executing an efficient, snout-up dog paddle. But he can go with his natural design by expelling air and plodding into a stream to lumber along the bottom or just hide out. Because of his naturally slow metabolism, six or seven minutes underwater is not out of the question. On the other hand, once he’s been run over 10 or 20 times on the highway, he’s probably flat enough to float.