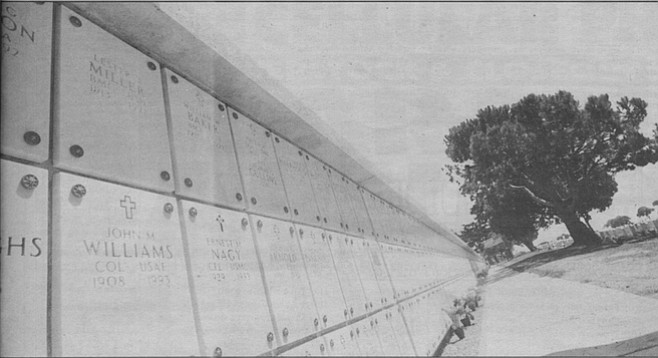 At the military cemetery, you can't take much with you

When a photograph of Robert O. Peterson’s funeral at Fort Rosecrans National Cemetery appeared in the San Diego Union-Tribune last week, hundreds of San Diegans learned the meaning of the phrase, a picture’s worth a thousand words. The flag-draped casket gave the impression that Peterson, the founder of the Jack in the Box restaurant chain and husband of former Mayor Maureen O’Connor, was being buried in the national cemetery. Since government officials have stopped performing casket burials in the overcrowded graveyard, the gesture seemed to reek of favoritism and bias.

“I can’t tell you how many calls we’ve gotten this week asking, ‘How come Mr. Peterson got a casket funeral?’ ” says Clifford Patterson, a cemetery representative at Fort Rosecrans. “We even had one lady who threatened to go straight to President Clinton himself to protest.” 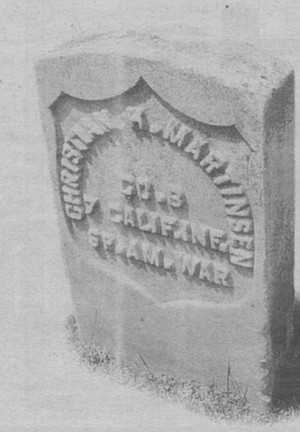 Veteran's tombstone. To stretch the capacity of national cemeteries, family members are buried side-by-side or one above another.

The truth is, Patterson says, Peterson was not buried in a casket, as the picture suggests. Instead, his body was removed from the casket and cremated at a nearby crematorium. When space permits, his ashes will be interred in one of the cemetery’s small vaults.

“We don’t give out any favors to people on the basis of rank or wealth,” says Patterson. The cemetery has been closed to burials since 1966, he says, unless the deceased had a previously assigned plot.

Patterson says that although Peterson was often given the rank of lieutenant in press accounts, the cemetery discovered the truth was different. “When we looked up his records in the National Records Processing Center, it says he only earned the rank of yeoman first class. That’s what is going to be inscribed on his vault marker.”

Peterson’s ashes, like all new admissions to Fort Rosecrans, will be placed in one of the newly constructed vaults in the cemetery. The vaults were built this year to keep the 147-year-old cemetery from being closed to new interments. “This cemetery means a lot to the residents of San Diego and to veterans who were based here. We want to keep it open for as long as possible,” Patterson says.

In order to do this, Patterson says, the Navy decided to build a wall around the property to hold vaults that would contain the ashes of more than 5000 veterans and their families. “In the future, it could be built to accommodate 30,000 to 40,000 more,” he says. Each cubicle measures 11- by 16-inches, and is sealed by a thick slab of white marble. The vault has the ability to hold three sets of ashes for the veteran, wife, and dependent child.

“Right now there are 500 deceased veterans from San Diego and around the country waiting to be placed in the wall,” Patterson says. “R.O. Peterson is 500th on a 500-person list to receive the honor. It’s likely that his ashes won’t be interred for months.”

Part of the reason the process takes so long, Patterson says, is that the cemetery ran out of space in October 1992. “We just received approval to inter the first 1100 more veterans,” Patterson says.

After the military assigns a vault, it sends the marble nameplate to Orange County to be carved with the veteran’s name, rank, branch of service, year of birth, death, and one of 31 approved religious emblems. “It’s one of the trademarks that unifies all of the national cemeteries in the U.S.”

Fort Rosecrans was first used as a burial ground in 1847 and became a U.S. Army Post cemetery in the late 1860s. The grounds, which total over 72 acres, hold veterans from the Spanish American War, most of the men who fell at San Pasqual in 1846, and the victims of the USS Bennington boiler explosion of 1905. “Over 63,000 men, women, and children have been laid to rest here,” says Patterson.

For many veterans, the site, which juts off the tip of Point Loma, is one of the most desirable national cemeteries to be buried in, next to Arlington national cemetery in Virginia. The cemetery has an air of peacefulness to it, with the Pacific Ocean stretching out to the west, the San Diego city skyline to the east.

Its prime location was touted in San Diego Magazine as “the place to watch the America’s Cup races” in 1992. During the race, cemetery officials closed the graveyard to all but mourners who had come to pay respect to their dead.

Patterson says a veteran is entitled by law to burial in a military cemetery if he or she has a discharge other than dishonorable. Spouses and dependent children are also entitled to the privilege. The government covers the cost of the gravesite, the tombstone, and maintenance of the site. A veteran may chose to be buried there for patriotic or economic reasons.

“It’s one of the lifetime benefits of military service,” says Faniece Croteau, burial director for San Diego’s branch of the Veteran Affairs. “We believe that each veteran has earned the right to be buried in a national cemetery.”

At Fort Rosecrans, 10 to 20 veterans each week take advantage of the privilege, says Patterson. The family often requests the attendance of a five-person honor guard to conduct the service. The honor guard presents the family with a United States flag, plays taps, and in some cases, gives a 21-gun salute, the highest military honor.

“We give the families the opportunity to perform whatever kind of funeral service they want,” says Patterson. “The only thing is, they have to pay for it .” For example, when Maureen O’Connor ordered a casket to be brought to the committal site, she had to foot the bill, Patterson explains. “That’s the rules.”

One of the misconceptions of a military funeral, Croteau says, is that the military takes care of all of the preparations. “You do have to take the body to a funeral home to have it prepared. If the family wants the deceased to wear his or her uniform, they have to provide it. If the deceased has gained 100 pounds, the family has to purchase a new uniform; the military doesn’t provide it.” The same goes for medals, she says. “The family has to bring whatever medals they want pinned on the uniform.”

Another problem with being buried in a national cemetery is that military graveyards are running out of room. Fort Rosecrans is one of 109 national cemeteries in the United States, and one of only four that operate in Southern California.

“We don’t have a military cemetery in San Diego to accommodate full body burials,” says Croteau of the VA. “People have to take that kind of service to the Riverside National Cemetery.” Riverside spokeswoman Eleanor Brown says the cemetery has the capacity to accommodate veterans until the year 2030.

The Department of Veterans Affairs has seen the number of interments increase steadily since 1979. “We have reached a time when many World War II veterans are nearing the end of their lives,” Croteau says. “This, combined with the number of younger vets dying of AIDS, causes tremendous strain on the national cemetery situation.”

To stretch the capacity of national cemeteries, families have been given only one gravesite. Family members are buried side-by-side or one above another. At some cemeteries, land has been purchased to secure an additional 90,000 gravesites. And, like the work at Fort Rosecrans, the VA plans to increase capacity further by constructing a series of buildings to hold the ashes of the veterans and dependents who choose to be cremated.

“For some people, it is more important to be placed at a certain cemetery than it is the type of burial they will receive,” Croteau says. “We are trying to accommodate whatever the family needs.”