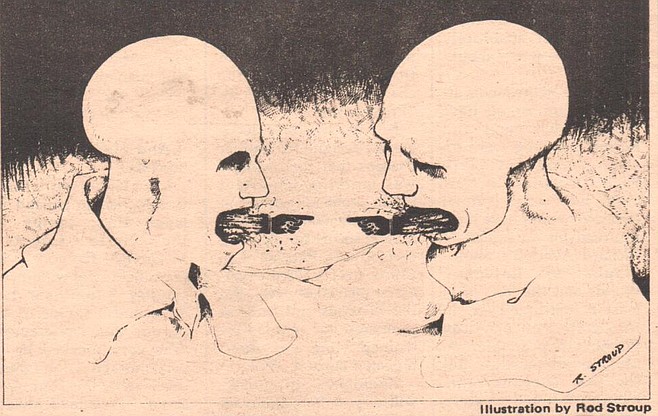 Gripes from the right

Despite the constant yapping by the morning paper about the "conservative trend" or "mood" of the San Diego City Council, that august body of politicos keeps coming up with more ingenious and more costly things to do to (not for) the people of this fair city.

There have been a few bright spots in the post-Lee Hubbard-Jim Ellis era however. Fred Schnaubelt and Tom Gade have put up a good fight, and Larry Stirling (wearing his "ABOLISH CPO" button) has come through on some very important issues. Bill Mitchell, I had great expectations for, and he has come through a few times, but I had hoped for a more pro-people voting record — he at least shows lip for the council meetings. (Did Ms. O'Connor get back from Africa yet, or does anybody caret) Former San Diego County Young Americans for Freedom member Bill Lowery seems to have forgotten much of what he believed in once upon a time, but perhaps the lure of higher office will cause him to be reborn. Ms. O'Connor is gone at last but, unfortunately, so is Tom Gade. I cringe when I think of what Mr. Williams, Ms. KilIea, and Pete have tried, and will try, to do to the people of this city. At least Mr. Cotcf isn't in Pete's pocket, and here's hoping that Mr. Cleator won't be.

1) The Tijuana Trolley, all $82 million plus cost overruns (Larry Stirling says it will wind up more like $250million), came before the city council this year. It wi1l be paid for with the state gas tax money. (Wouldn't it be nice if they just lowered the state tax on gas instead?) It was proposed to let the citizens of the City of San Diego vote on whether they wanted this item, which some studies have shown may use more energy than it is supposed to save. But of the nine council members, only three (Fred Schnaubelt, Tom Gade, and Larry Stirling) thought that the public should be allowed to choose, and thus the trolley goes on. It should be noted that the trolley will run from the border to downtown, while population is shifting to the north and east. Here's wishing good luck to the nonelected board in their quest to try and get Ms. O'Connor to attend their meetings.

2) Downtown redevelopment, all $132 million of it, to be repaid from revenue bonds of the city, will oust many senior citizens frol!' their long-time homes downtown. It will provide the developers with a nice profit and bring back the elite from La Jolla and Point Loma to do their shopping downtown, however, and Pete and the downtown big contributors sure think that it is very Important to do that. It will also afford easy shopping for the residents of the new Marina Towers (which will also wipe out a lot of homes of senior citizens in the name of progress), and we can't have those people having to travel too far, now can we? Who cares what happens to the senior citizens, as long as Pete's elites get theirs? Fred Schnaubelt and Tom Cade did, but they lost on a five-to-two vote. Assemblyman Pete Chacon cares, too.

3) The downtown convention center, with its $177 million price tag. will compete with already built and proposed privately financed ones. This one will be paid for with the Transit Occupancy Tax, which is supposed to be used to lure tourists to San Diego to help the economy, not to help the city compete with private enterprise within its borders. Couldn't this money have been better used elsewhere? Fred Schnaubelt, Tom Gade. and Bill Mitchell thought so, but lost on a five-to-three vote. When it was proposed that the public be allowed to vote on this matter, only Fred and Tom voted to let the public have their say - the vote was six-to-two.

4) Extending the airport curfew from midnight to 6:00 a.m. to 11:00 p.m. to 7:00 a.m. disrupted airline schedules all over the country due to the resulting problems with connecting flights. Pete's elites strike again. The winners: those who Jive in Lorna Portal, most of whom have

moved in since the advent of the jet airliner. The loser: the economy of San Diego — businessmen, and the money they spend, coming in the next morning instead of the night before and staying at a local hotel; and businessmen not coming at all because of the hassle. Only Tom opposed this one — Fred and Larry Stirling were absent.

5) The great voter pamphlet fiasco all started when the San Diego city clerk refused to accept a ballot argument signed by a representative of Young Americans for Freedom. The YAF argument opposed a ballot proposition co-authored by that same city clerk, and was the only opposing argument submitted. The stated reason for the refusal was that the argument mentioned Councilwoman Lucy Killea. This not being a lawful reason under the state elections code for the refusal, San Diego YAF's attorney (me, on behalf of the United States Justice Foundation) tried to persuade Mr. Abdelnour to change his mind. He persisted, and YAF went to, court. Judge Edward T. Butler agreed with YAF's position and ordered that the ballot argument be printed and distributed to the voters of the City of San Diego. San Diego City Clerk Abdelnour, however, knowing of this dispute, had already printed the voter pamphlets for distribution. Thus, not only was a lot of time wasted by the San Diego City Attorney's office in trying to defend this suit, but one set of ballot argument pamphlets, one for each registered voter in the City, was discarded, and a new set printed for distribution.

Enough of this. On to my suggestions for the "Who's Got Principles" Awards for 1979:

1) UCSD Medical School, for screening out medical students who won't perform abortions. I thought they were being trained to save lives, silly me.

2) The National Women's Political Caucus endorsing Mr. Leon Williams over Mrs. Norma Freeman for San Diego City Council, due to Mr. Williams's "winnability." Unfortunately for Norma, she is a Mexican-American working woman who has been laboring for years in the minority community on various community projects. If she had been white and rich, or with a rich husband, she might have gotten the endorsement.

4) The velvet glove treatment by the morning and evening dailies of the editors' pet, Pete. Note the total ignoring of the recent San Diego YAF city council rating, released to the press.by those two publications — the Sentinel printed it — which did not put the mayor into too good a light from a conservatlve point of view. The mayor still wants to run for higher office, and he can't offend the conservatives in the party too much. The mayor ran behind Fred, Tom, Larry, Bill Mitchell, and Bill Lowery in the survey. One nice off-shoot of this is that Governor Reagan seems to be gelling more positive coverage since Mayor Pete endorsed him. There are other examples of this "if you can't say anything good about the mayor, don't say anything" approach by the two dailies, but I think I have made my point.

1) Jim Bates announced that in spite of all his promises during the Hubbard campaign not to run for another office if reelected to the board of supervisors, he was following long political traditions and not holding the voters to his promises. Jim, they will love you in Congress; you fit in.

2) Roger Hedgecock announced that he was accepting campaign contributions, but would decide later what office to run for.

3) Mike Gotcha announced that he supported building a tunnel under the bay to Coronado. where he thought a new international airport should be built. But, he confessed, he had never considered the cost (much less the feasibility).

4) The Metropolitan Transit Development Board's voting of funds to study expanding the north-south Tijuana Trolley before any work was done on the line, proving that the best time to study expanding a bureaucracy is before it's actually done anything.

5) The six cost overruns by the Centre City Development Corporation's study on the cost of the proposed convention center. All cost overruns have been achieved years before any groundbreaking ceremonies, thus establishing a new record.

Related: Gripes from the Left