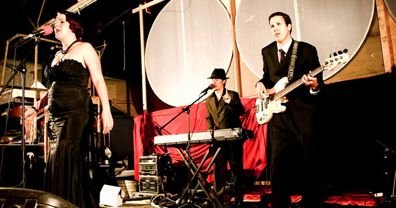 The music of downtempo trip-hop trio XIV is a dark and melodic blend of live and electronic sounds combining elements of trip-hop, downtempo, and jazz. Sultry vocals by Kelly Samuels weave into the rich tapestry of Nathan Samuels’ hypnotic melodies and Tony Sandoval’s driving basslines.

“We play a broad mix of acoustic and electronic styles,” says Samuels (who shares a birthday with the late Michael Hutchence). The band uses an array of keyboards, guitars, trumpets, and analog and digital percussion.

“Our music is usually compared to acts like Portishead and Massive Attack, but we’re always adding new elements — rock, jazz, hip-hop, drum and bass, industrial, ambient. Whatever fits the mood.”

Nathan’s wife, singer/flautist Kelly Samuels, bristles at the request to describe XIV’s sound. “If we try to accomplish anything, it’s to defy genre classification.”

In concert, the trio’s dark carnival sound is vaguely cinematic while their svelte attire, big-band stage moves, and Kelly’s jazz-diva persona are more akin to purveyors of lounge Muzak, a genre they both enjoy and exploit without a trace of irony.

Furthering their soundtrack-style presentation, bassist Tony Sandoval, a former school teacher, designs and engineers video projections that appear behind the band on multiple circular screens, Pink Floydian in appearance but scaled down to more club-friendly dimensions. The projections are combined with real-time footage of the band shot live with multiple cameras operating around the stage.

The group’s second CD, Theta, was released in summer 2010.