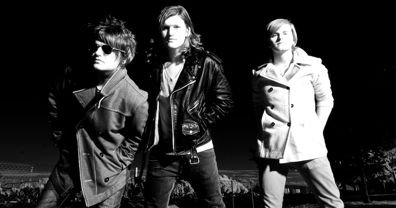 “White Apple Tree is the lovechild of determination and boredom,” according to founder Ryan Marshall Lawhon. “[The band] has taken on many shapes and forms, an ever-changing musical effigy.”

Lawhon’s musical adventure started when he was a freshman in high school and was talked into playing bass with his church band. “Apparently, they needed a bassist quickly,” he says, “because just three days after renting my first bass -- [I] never played any instrument before -- they had me up onstage playing a full eight-song set.”

As the modern electronic era made it possible for anyone to record music with modest home-based equipment, Lawhon became a one-man band. “My friend was selling a little Tascam 8-track recording system at an extremely low price so, even though I did not know what I would do with it, or even how to start to use one, I just decided I would play around. I did not own a microphone, so my friend lent me his Nady mike that cost him a total of five dollars, and I tried to record. We had an old keyboard lying around, so I decided I could mess with that as well, and within two days I had learned to play decent synth and had fully recorded my first track, entitled ‘Eyes.’”

After posting the song on MySpace, he says, “I soon found my groove and began my writing process, finding my own style and the best way for me to write, all on my own with no help from even my musical friends. I found a pride in making my own music, finding that even if I had no friends to collaborate or depend on, I could write a song that others enjoyed just by myself in my room, with the cheapest equipment anyone could ask for.”

As of late 2009, White Apple Tree is based in La Jolla and has been joined by local musicians Taylor Lawhon (keyboards) and Stefan Mac (drums). The band’s MySpace page has 45,000 friends, with well over two million plays and views, and their song “Snowflakes” was heard in season two of the TV show Gossip Girl, in the episode “Chuck in Real Life.”

The guys spent 2009 touring the So Cal area and reaching across America, with bands like Shiny Toy Guns, the Delta Fiasco, and Innerpartysystem. The band opened for the Asteroids Galaxy Tour 2010 at the Casbah.

In 2011, they earned an overseas hit with their song “Snowflakes,” which appeared on the soundtrack of the German film comedy Kokowaah. The song charted in Germany, Austria, and Switzerland.