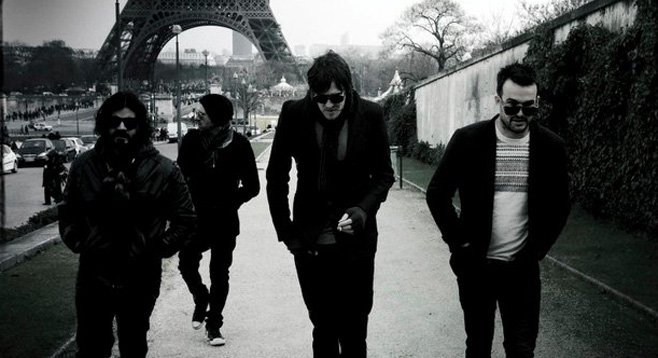 Transfer's initial lineup featured Matthew Molarius on guitar and vocals, Jason Cardenas on guitar, and Michael Cooper on drums. Brian Karscig from Louis XIV produced the band’s first single, "Sinking Sailing," from their EP Sunken Eyes. The song received airplay on both BBC Radio and XFM Manchester during the band's subsequent tour of the UK.

In 2006, the group utilized a friend of a friend who worked in the Sony gaming department to get their song “Smoke of the Crowd” into PlayStation’s MLB 2006. It was Transfer’s initial experience venturing into these waters.

“It was the first time we had been approached for a sync license and we didn’t have representation at the time, so we had to negotiate for ourselves,” Transfer singer-guitarist Matthew Molarius explained. “That being said, it didn’t have a profound effect on the band’s lifestyle, per se, but it did offer us an education and a glimpse into the world of licensing intellectual-property rights. It’s a great way for bands to earn money, especially in this day…when people can pretty much get music for free online.”

Molarius went on to start the publishing company Obscure Magpie Music after this outing. He feels it is always best to have any contract or license reviewed by representation, such as a lawyer or a publishing administrator.

“Then you stand to at least maintain a dialogue and make a little scratch for all the hard work,” he said.

Having spent the majority of 2006 and 2007 touring the American South and Northwest in support of their debut LP Faded Signal, the band found time to take home a 2006 San Diego Music Award for "Best Alternative Album," receive a 2007 SDMA nomination for "Best Rock Band," land a song on Sony Playstation's MLB '07: The Show, and appear on MTV2's Bands on the Rise. Their songs have garnered airplay on 94.9 (KBZT) and 91X (XTRA).

Bassist Shaun Cornell (Silent Comedy) made his debut with the band at the House of Blues in April 2008. In late 2008, Transfer toured with the Silent Comedy, while Transfer bassist Cornell joined Louis XIV.

2009 found them recording their second full-length album, co-produced with Shaun Cornell, mixed by Mark Needham (the Killers, Chris Isaac), and released on the band's own Obscure Magpie Records. The label was formed in order to build up solidarity among San Diego bands, several of which have already released records on Obscure Magpie.

In September 2009, the band won Best Rock at the San Diego Music Awards. Their 2009 album Future Selves was a digital-only release. Mike Cooper quit Transfer (as well as Crash Encore) in early 2010, after five years in the drummer seat, in order to concentrate on his new band Hyena.

In September 2010, Future Selves won another SDMA, this time for Best Rock Album. They went on to tour Europe with Brandon Flowers (the Killers), beginning October 12 in Glasgow.

They returned to England in February, 2011, having won new UK fans touring with Brandon Flowers, before embarking on a European tour with White Lies. Around the same time, they released a new UK single “Losing Composure,” including two other new songs, “White Horse” and “Like A Funeral.” While in England, they hung out with Paul McCartney during a TV show taping at London’s Abbey Road Studios.

They toured the U.S. with Kaiser Chiefs in earfly 2012, beginning March 6 in Boston and wrapping up March 24 in Vancouver, BC Canada. They also played that year’s SXSW music fest in Austin, and a new UK single for “Take Your Medicine” was made available from Cool Green Recordings, with a 3D video streaming online.

2014’s Shadow Aspect album was released by Mascot Records. After playing the BottleRock Napa Valley festival in May 2015, the band split. They reunited for performances at the Casbah during its early 2019 30th anniversary celebration.