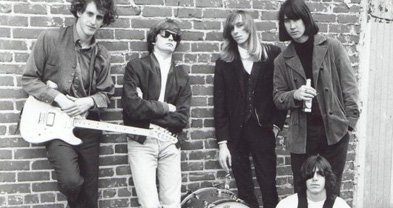 RIYL: The Seeds, the Yardbirds, the Pretty Things

Influences: The Yardbirds, the Pretty Things, the Remains, the Shadows of Knight, the Morlocks, the Damnation of Adam Blessing, the Monks, the Seeds, Velvet Underground

The Tell-Tale Hearts evolved from an earlier band called the Mystery Machine, featuring Mark Z (later of Manual Scan and the Shambles). Their first gig in September 1983, a yard party at 5266 Cobb Street (off Clairemoint Mesa Boulevard), was also the first public show played by the Gravedigger V (though they were called the Shamen at the time).

“They had never seen anything like them in San Diego," according to the liner notes of High Tide: The Tell-Tale Hearts Anthology, 1983-1986. "And what they saw began to shatter the boring, stultifying sameness of the local music scene into a million pieces. The wild-eyed singer snarled and leapt about like a monkey, all the while shaking a pair of maracas and banging on a cow bell, wine bottle, or beer can. The drummer hid behind a relic of a kit and pounded his tom-toms like they were tribal war drums. The tall, red-haired guitarist snaked about on stage, by turns stroking and stabbing at his instrument. The organ player, his hair completely covering his face, kicked at his amplifier and rolled on the ground, wrestling with a harmonica. And the long-haired bass player sneered at the crowd from behind a pair of sunglasses, looking positively wicked. There was certainly nothing on MTV which could have prepared them for this.”

In 1994, they partially reunited to take part in a five-date West Coast tour to promote their High Tide anthology. However, with Bill Calhoun living in the Northwest and bassist Mike Stax's reluctance to participate, the odds seemed slim for any further shows.

On November 11, 2004, the Tell-Tale Hearts reunited for their first performance in over ten years. "It wasn't advertised at all, we only emailed a few friends about 48 hours ahead," says Stax of the group's surprise gig. About 30 people saw the 1980s' garage band play a set at the Ken Club. "We didn't even rehearse beforehand; it was all thrown together in less than a week."

The gig came about from an offhand suggestion by Nick Phillips, head of Australia's Corduroy Records (owner of the only vinyl-pressing factory on that continent) and singer for the band Shutdown 66, who was coming to San Diego as part of a tour. "They used to come see us play in '84 and '85 and cite us as one of their inspirations. Nick's record company released some Tell-Tale live stuff."

The reunion included four of five original members: singer Ray Brandes, guitarist Eric Bacher, drummer Dave Klowden, and Stax. "[Organ player] Bill Calhoun lives in Carson City, Nevada, now. He has kids, and I just couldn't talk him into it...Nick [Phillips] called him from Australia and was even going to fly him out, just to do a few songs, but he just couldn't be talked into it."

The band agreed on playing three songs: "Hey Tiger," "At the River's Edge," and "That's Your Problem." As audience requests were shouted out, they ended up playing others, including "Bye Bye Baby" and "Cry."

"We could barely remember chords," says Stax, "and it slowly got worse as we went on. I gave up halfway through 'Our World Is Upside Down.' I just couldn't remember it."

Asked if the Tell-Tale Hearts have any plans to record together again, Stax laughs. "Definitely not...I still think there's nothing sadder than a bunch of guys in their 40s trying to relive their glory days and make money."

That's why news of the September 2007 Tell-Tale Hearts reunion caught many fans off guard.

"In the past, I didn't see any point in us reuniting," says Stax, who also serves as editor of the '60s music fanzine Ugly Things. Stax chose to concentrate on his current combo, the Loons. After a year-long break from the Loons (while Stax and his wife had a baby), he changed his mind.

"In that time, I reflected on my musical past a bit, and I thought, "Why not, it might be fun.'" Stax acknowledges that the possibility of making a little extra cash appealed to him. "Unfortunately, all the profits have already been spent on hair replacement, Botox, and liposuction," he jokes.

Adams Avenue Street Fair talent buyer Steve Kader engineered the reunion after an unsuccessful attempt in 2006. The Tell-Tale Hearts reunions took place September 28, 2007, at the Casbah, and at the street fair on September 29.

According to Brandes, offers have come in for more shows, but Stax is adamant that these two will be it. Though a vintage live track will be released on a compilation disc by Italy's Misty Lane Records, Stax dashes hopes for any new recordings.

"This is all just a big last 'fuck you' to all those people that wouldn't give us the time of day back then," laughs Stax. "After that last show, [it's] straight back to my job as a Wal-Mart greeter."

In late 2017, Munster Records released a seven-inch vinyl EP featuring the earliest recordings of the Tell-Tale Hearts, 517 Fourth Avenue, taped live in the studio on March 7, 1984, with a picture sleeve including liner notes by Greg Prevost.