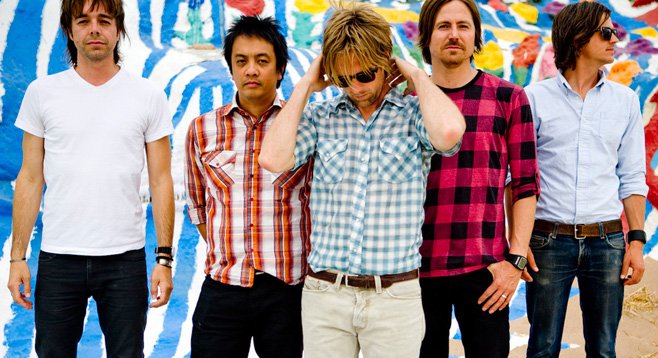 Sound description: If Jesus was born in in 1982 and later joined Fall Out Boy.

Or do you feel the same as cartoon character Hank Hill, when he pronounced to a Christian rocker "Can't you see you're not making Christianity better? You're just making rock 'n' roll worse."

Those a bit more in the know maybe had a few albums by nine-fingered guitar virtuoso Phil Keaggy, whose meticulous picking and McCartneyesque voice would have screamed “cult audience” no matter what he sang about. Some might have followed the careers of crossover artists who left the mainstream for the Christian bookstore market (i.e., Kansas’ Kerry Livgren) or performers who went from the latter to the former (Amy Grant’s wooing of the mainstream was only assisted, perhaps assured, by all the press about members of the Christian rock community calling her a “traitor”).

More recently, bands like U2, Creed, and P.O.D. have blurred the lines between Christian rock and plain old rock-and-roll by bringing faith to some good songs instead of just singing to the faithful.

Local-boys-made-good Switchfoot (their website header reads “Diego Rock USA”) earned double-platinum sales with 2003’s The Beautiful Letdown. The album landed two singles in the top-five Billboard charts (“Meant to Live” and “Dare You to Move”), as the band scored gigs on Late Night with Conan O’Brien and The Tonight Show.

“The Tonight Show was extremely cold,” recalls singer/guitarist Jon Foreman. “Other than that and meeting the guest snakes, nothing really happened. However, Conan is a bit of a guitar buff and tried on my Firebird for size. He’s not a bad player, either.”

Switchfoot is in the CD rack right there between Matthew Sweet and System of a Down, and their Live in San Diego DVD has been certified RIAA gold in sales (no small feat for a music DVD).

In May 2008, the band’s song “This Is Home” was heard within and during the closing credits of the film The Chronicles of Narnia: Prince Caspian. Their 2008 Music Builds tour donated profits to Habitat for Humanity.

In late 2010, a “lost” EP, Eastern Hymns For Western Shores, was released exclusively through the Switchfoot website. According to the band, “These songs were recorded during the time between Nothing Is Sound and Oh! Gravity. For years, the masters to these sessions were thought to be lost/stolen, but they have at last been recovered. Recorded and mixed within the same week, these six songs showcase a darker and more mysterious sound for the band...each song on the EP has its own unique postcard, and it’s all wrapped up like you just picked them up from the gift shop on your travels around the world.”

In February 2011, they won a Grammy for Best Rock or Rap Gospel, for their album Hello Hurricane. On February 26, Foreman sang the National Anthem at the San Diego State Aztecs vs. BYU Cougars basketball game, before taking the band in April and May on a tour of Australia, Malaysia, the Philippines, and Canada.

The day after performing at the Del Mar Fair on June 17, 2011, the Grammy winners hosted their 7th Annual Bro-Am charity event at Moonlight Beach in Encinitas. Around the same time, Atlantic Records announced it would release their eighth studio record Vice Verses, produced by Neal Avron (Weezer, Linkin Park), in September.

In August 2011, they were named Artist of the Year at the San Diego Music Awards, before appearing on Jimmy Kimmel Live on Monday, September 19, to debut their new song “Dark Horses,” the lead single from Vice Verses. A national tour with Anberlin started September 22.

They played the Hangout Music Fest, May 18 through 20, 2012, on the beaches of Gulf Shores, Alabama, along with locals Tribal Seeds and Flogging Molly, with headliners to include the Dave Matthews Band, Jack White, and Skrillex.

After a subsequent North American tour, they headlined the traveling Soundwave Festival in Australia and New Zealand and shot footage for their surf film Fading West in both countries, as well as in South Africa. They returned to San Diego for An Evening with Switchfoot at La Jolla Playhouse.

On Record Store Day 2012 (April 21), they released a limited edition CD entitled Vice Re-Verses. The EP features remixes of songs from Vice Verses by Paper Route’s JT Daly, Owl City’s Adam Young, Photek, Darren King, and DandJ. A digital version was released May 1, with a remix of their 2012 single “Afterlife” by Neon Feather, the winner of the Switchfoot Remix Contest.

The 8th annual Switchfoot Bro-Am at Moonlight Beach happened in Encinitas on June 16, 2012, with
Dead Feather Moon, the Howls, Brandon and Leah, and Jon Foreman & Friends (including Switchfoot members). In August, they won Artist of the Year at the San Diego Music Awards.

Fiction Family Reunion was recorded at Switchfoot’s Spot X Studio in Carlsbad over a series of sessions spanning 2010 to early 2012, the lengthy process necessitated by Foreman's and Watkins’ busy schedules. A family in more than just name only, the band was joined on a number of tracks by Nickel Creek fiddle player Sara Watkins and multi-instrumentalist John Mark Painter.

Switchfoot's 2013 film Fading West was directed by Matt Katsolis and filmed during their 2012 World Tour, charting the creation of their ninth album in its earliest and most unpredictable stages. Part rock documentary, part surf film, and part travelogue, the film offers glimpses of the longtime surfers on their boards and in the waves, and capturing their live shows.

They performed “Who We Are” on the Tonight Show with Jay Leno December 10, 2013 previewing the first single from Fading West. Foreman performed acoustic sets at two early-2014 Heavy & Light concert events, in Los Angeles on January 11 and Orlando on January 19, along with singer Mary Lambert, poet Anis Mojgani, and others.

The Fading West album (Atlantic Records/Word) debuted at number six on the Billboard Top 200 sales chart. Their previous release Vice Verses peaked at number eight in 2011. A followup 7-song EP was released in 2014, The Edge of the Earth: Unreleased Songs From the Film Fading West.

Their surfing/concert film Fading West made its TV debut October 4, 2014, via Palladia Viacom's Hi-Def Music Channel, with the DVD hitting shelves on October 14. Around the same time, a new Derec Dunn-directed music video for “When We Come Alive” began streaming online.

The band's tenth album Where the Light Shines Through debuted at number 10 on the Billboard chart in summer 2016.

In 2017, while touring with Lifehouse, they teamed up with that band at a Nashville studio to record a benefit single for Hurricane Harvey victims, “Shine Like Gold.”

A 14-song album called Native Tongue, recorded primarily at Melody League Studio, was recorded in 2018, co-written and produced with members of One Republic. A single for "All I Need," which was also shot as a video featuring footage shot in San Diego, and a video was also released for "Let It Happen," a condensed recounting the band's entire story.

Jon Foreman's wife gave birth to the couple’s second child in June 2018. Around the same time, keyboard player Jerome Fontamillas was diagnosed with cancer. After having one of his kidneys removed that December, he announced he was cancer free.

They launched a two-month tour on Valentine's Day 2019. That summer, they released the Live From the Native Tongue Tour EP (Fantasy Records), a six-song, digital only release featuring five live tracks recorded at the Tabernacle in Atlanta, GA along with the original album version of "Native Tongue." They also released a live video for that track, as well as for "Take My Fire," the latter directed by Erick Frost.

After the EP's release, the band returned to the road, opening for Bon Jovi at several summer European shows, kicking off July 10, 2019 in Zurich, Switzerland. Their 26-city Fantastic Traveling Music Show Tour kicked off October 3 in Des Moines, IA, featuring two sets back-to-back, the first a stripped-down acoustic set with never before heard stories woven throughout followed by a full-blown rock show to end the night.

In late 2019, two-time Billboard Award winning electronic violinist Lindsey Stirling released a new version of the band's song "Voices" (originally from their recent Native Tongue album), for which she also directed the accompanying music video along with Joshua Shultz - it premiered via her own YouTube channel to over 12 million subscribers.

They celebrated the one year anniversary of their Native Tongue album in early 2020 with a 5-song Reimagine/Remix EP, featuring "re-imagined versions of select songs." Electronic violinist Lindsey Stirling contributes "Voices," for which she also directed the accompanying music video along with Joshua Shultz, and other contributors include Brent Kutzle (One Republic), Will Chapman (Colony House), John Painter on horns (Fleming and John), and Mason Self. The band also shared a music video for the new version of "Wonderful Feeling."