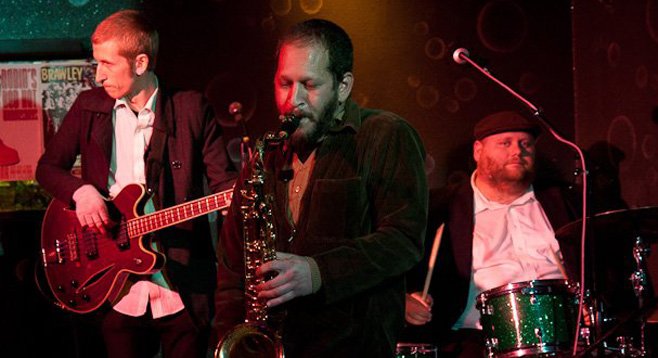 RIYL: The Styletones, Poets of Rhythm, Groove Holmes, Stevie and the Hi-Stax

The Fire Eaters began as a soulful funk band that includes members of the Styletones, Poets of Rhythm, and Groove Holmes. Drummer Jake Najor also plays with Stevie and the Hi-Stax. In 2012, the band changed its name to the Soul Fires.

In a way, the band is the next generation in a rich local history of soul and acid jazz. According to keyboardist Tim Felten, “As far as how we fit into this, Jake has played with both Robert Walter and Karl Denson, and Jake’s brother Zak was an original founding member of the Greyboy Allstars. So, there’s some lineage here with Jake.”

The band started in 2009, when they backed Ikah Love during his El Dorado residency. “That was the catalyst that got this band going. We moved on to El Camino and ended up parting ways with Ikah and doing our own stuff,” says Najor.

They cut their teeth playing standards in the genre and got tight through constant gigging, armed with vintage equipment, warm tones, soulful arrangements, and chops. “The goal is to write more originals. Opening it up to different influences. That soul-jazz music is very prevalent in what we do, but we do want to move it forward,” says Najor.