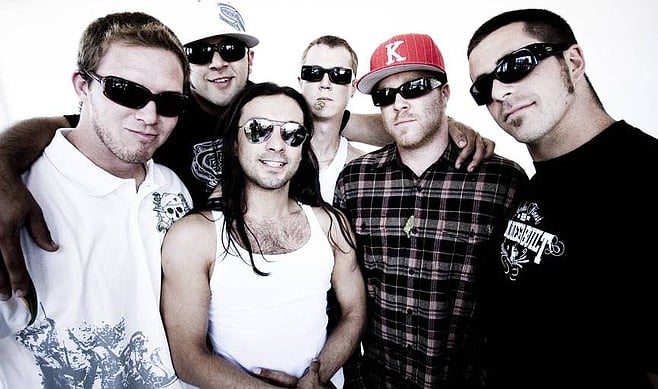 Ska-flavored pop-punkers Slightly Stoopid played their first paid gig in 1994 at Soma. They call themselves the masters of the “stealth groove.” That’s when you sneak a melodic hook or two into a long-winded jam. Otherwise, the laid-back Jack Johnson imprint abides. More skatepunk in their early days, the band has grown a dub bottom over the years and matured into a weedy mix of reggae, hip-hop, and funk.

They're not an "intellectual" band, as their name would imply. They don't have to be; they're a dumb beach-party band, and for what they are, they're really good.

The group formed in Ocean Beach to create a fusion of acoustic rock, blues, reggae, hip-hop, and punk. While still attending Point Loma High School in 1995, band members Miles Doughty and Kyle McDonald caught the attention of Sublime singer Bradley Nowell, who signed them to his own Skunk Records label and released their first two CDs. But their success was really mom-powered.

“Me and Kyle’s dad and my mom and a few other people had seen Sublime play at Dream Street. This might have been ’93? I was 16. And, somehow, my mom got Brad and Miguel [Michael Happoldt, of Sublime] to come back to our house the next day. We started jamming. From there, they kind of took us under their wing and brought us into, like, the Skunk Records family, which was pretty rad.”

As of summer 2011, Doughty and his wife and two-year-old daughter still live in the O.B. area. “I have a song called ‘Nico’s’ — that’s my favorite breakfast spot and Mexican-food place. It’s on Newport Avenue. I pretty much grew up in that spot.” He laughs. “We’re lucky to still be in this dope little community, O.B. and Point Loma. Once you grow up here, you don’t want to be anywhere else.”

The album entered the Billboard 200 at number 13, Billboard’s Independent Albums chart at number 3, and the Rock Albums and Alternative Albums charts at a peak position of number 4.

They appeared on Jimmy Kimmel Live! on September 12, 2012. Around the same time, a new video was released for “Top of the World” starring Tommy Chong and Norwood Fisher (Fishbone) and they closed out the year and began 2013 on a western states tour featuring Karl Denson on most dates, beginning in New Mexico.

Celebrating marijuana’s newly legal status in Colorado, the band teamed up with Cypress Hill to stage Slightly Stoopid’s 420 Hot Box on April 20, 2013, at Colorado’s Red Rocks Amphitheatre. They followed up by playing Alabama's Hangout Music Fest (May 17 through 19), headlined by Stevie Wonder, Tom Petty, and Kings of Leon.

They played the First Annual Blaze 'N' Glory Festival on May 15 and 16, 2015 in San Bernardino, alongside fellow locals like Pepper and others, including Rebelution, Iration, Method Man, Redman, Ice-T's Body Count, and more. Their summer 2015 album Meanwhile...Back at the Lab was preceded by a single called “The Prophet,” written by the band’s co-frontman/bassist/guitarist Miles Doughty when he was 16 years old.

“The Prophet” initially started as an early collaboration with the late Bradley Nowell of Sublime, while the group was signed to his Skunk Records. Nowell than recorded an early version of the song called “Ain’t No Prophet” which was released on Sublime’s posthumous Everything Under the Sun rarities box set. The composition came full circle for Slightly Stoopid during their Meanwhile...Back at the Lab studio sessions.

They headlined the second Closer to the Sun music fest (December 5 through 9, 2015) at Now Sapphire Resort in Puerto Morelos, Mexico, for a bill that also included SOJA, Iration, Pepper, Ozomatli, G. Love, Don Carlos, Karl Denson, and Ian Neville. They returned for the 2016 Closer To the Sun fest in Puerto Morelos, Mexico (December 14 –18), alongside Dirty Heads, Matisyahu, Tribal Seeds, and Stick Figure.

In early 2017, they reportedly pressed their single “Dabbington” onto a slab containing $6,000 worth of smokable hashish, to promote a brand of hash being marketed by Stoopid manager Jon Phillips. That summer, an animated video for “One Bright Day” debuted, featuring singer/songwriter Angela Hunte and comprised of animated stills procured from large canvas paintings donated by Hawaii-based artist and aspiring pro-surfer Danielle Zirk.

A video for “One More Night” released in summer 2019 collects vintage footage of the band over the last 20+ years, from early days with Bradley Nowell (Sublime), Snoop Dogg, Bob Weir, Sly and Robbie, Half Pint, and locals Karl Denson and Pepper. They followed up by touring with Matisyahu, Tribal Seeds, and HIRIE, and playing Germany's Summerjam Festival, before restarting a U.S. tour on July 11 in Bonner, MT and running through August.

Their Party at Fivepoint, staged October 12, 2019 in Irvine, included support from local reggae act Hirie, as well as the Interrupters and J Boog.