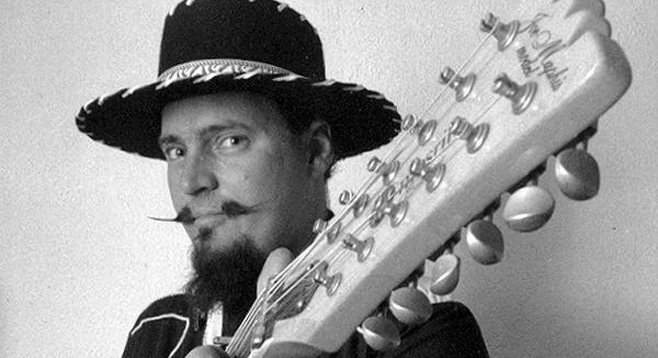 National City's own Richard Banke -- aka Skid Roper -- first came to local prominence in 1985, when he released a debut album with his musical partner Neill McMillan, otherwise know as Mojo Nixon. Skid played "washboard and other stuff," as he puts it. Mojo played guitar, sang, and stomped the floor like it was on fire. Songs from Mojo Nixon and Skid Roper include classic cuts like “Jesus at McDonald’s”:

In their day, Mojo and Skid were the funniest duo alive (anybody remember the words to “Stuffin’ Martha’s Muffin”?) and their humor seemed to catapult Country Dick of the Beat Farmers to new depths of comic depravity of his own. Such was the climate in the 1980s at the Spring Valley Inn or the Spirit or at Bodie’s when it was still on University Avenue.

Skid and Mojo parted in 1989, while Roper continued to play in other bands over the next two decades, including the surf group the Shadowcasters, managing to release two solo albums along the way.

In late 2009, at 55, Roper was ready for his own turn in the spotlight. “I don’t like to think that my time has completely passed. I spent a lot of years playing in many bands, supporting other people’s music, and kind of forgot about my own.”

For 2009's Rock and Roll Part 3, his first solo record in 18 years, he does most all the playing and vocals. “I could only afford three hours of studio time per week,” says Roper (real name Richard Banke). “Many times, not even that. Months would go by without any recording progress.”

Several of his former cohorts guest on the album, including Jose Sinatra (vocals), Jonny Viau (sax and flute), and Joel Kmak (drums). Lest you think an acrimonious breakup was what ended Roper’s famous musical partnership, he points out, “Mojo Nixon added bongos on one track, ‘Hope.’ He’s actually a pretty good bongo player.”

In late September 2012, Mojo Nixon reunited with Roper for a performance at the 31st annual Adams Avenue Street Fair. “Me and Skid? We haven’t played in 20 years,” he told the Reader. So is the door is open to future Mojo-and-Skid collaborations? “You never know. Cash talks and bullshit walks,” he laughs.

“I see Skid every now and then. People say, ‘When’s the big reunion tour? When are you guys gonna play again?’” Then, Nixon, shock jock to the end, says this: “I’ll try not to get in trouble by saying motherf--ker too many times. I think they give you a three-motherf--ker limit.”

Roper relates one of his oddest stage moments for the Reader. “I think it was in 1987, Mojo Nixon and I were playing at the Fillmore Auditorium in San Francisco on a bill with Camper Van Beethoven and Ten Foot Faces. It was a packed house and right in the middle of our set, Mojo hands me his plugged-in guitar and says he has to pee and then runs off backstage! All alone on that large stage, I looked out at a thousand eager faces and started playing 'Ripple,' the old Grateful Dead tune. 'If my words did glow, with the gold of sunshine.'”

“Soon, I noticed tie-dyed hippie bodies swaying back and forth and more and more lighters were flickering all over in the darkened crowd as they started singing along. I wanted to yell out that I was just kidding but I also wanted to get to the pretty minor chord bridge and chorus and the 'Ripple on still water' part. Luckily, not too long after that, Mojo came back on stage, freshly relieved, and we went on with the regular duo set.”