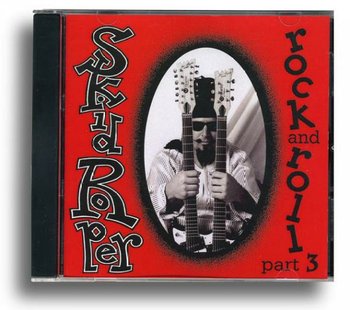 SDR: This has a cool ‘50s dragstrip Link Wray sound. Why do you think a genre like surf music still has such cultural longevity?

SKID: That’s interesting to me that you hear surf guitar, when in reality, there is no surf guitar on this whole CD. I think you hear the surf guitar because you expected to hear surf guitar, knowing that for years I’ve had a surf instrumental band called the Shadowcasters. I hear this song as a psychedelic pop song, with fuzz guitar and feedback.

As for the longevity of the surf guitar sound, it simply feels good in your ears. That reminds me of when I went to Europe for the first time with Mojo Nixon, and we stayed for a month at a guy’s house in Holland who worked for the record company. This was around 1987, way before the movie Pulp Fiction came out and used “Misirlou” as its them song.

Anyway, I had brought with me a handful of old surf instrumental 45s, just in case I met up with someone to trade with. I never did trade, but I remember playing the single of “Misirlou” by Dick Dale for our gracious house-sharing Dutch friend. He had never heard of surf music before but, after hearing the record, he said – in his thick dutch accent – “I don’t know this music, but it is GUUUUUDE!”

SDR: Your take on country seems more sagebrush ‘n’ saddle than good ol’ boy redneck. Is that from growing up in the wild west instead of down south?

SKID: Country?! Are we listening to the same song? To me, this has a spooky organ-flavored Doors sound to it.

It was inspired by the downtown San Diego of my youth, when I had to take the bus to get to the thrift stores and old book stores near Broadway. Before the 1980s redevelopment homogenized everything down there and kicked the bums uptown, downtown San Diego was full of interesting sights and experiences for a teenager too young to drive.

As for country music, I’m definitely a Hank One [Williams Sr.] kind of guy.

SDR: Are you secretly a polka player?

SKID: I wanted a spaghetti western feel on this one. There are foot stomps instead of a bass drum, and a very nifty baritone guitar solo inspired by old Johnny Horton records. The chorus repeats “Waddle Deddeh” over and over. He was a local politico I remember as a kid. I always liked his kooky name, and thought it should be in a song. So now it is!

By the way, this is one of those rare songs where everything in the lyrics is true. I was going out with a girl who wanted to go to San Francisco. On a Monday afternoon, she announced to me that we had toi break up. Her best friend secretly told me it was because she wanted to visit her ex-boyfriend in ‘Frisco with a clear conscience.

I was not sad when, later, I heard that she crashed her car on the way up the coast. Karma.

SDR: Do you ever aspire to do a wholly hip-hop track?

SKID: No, I don’t really care for hip-hop. I love a melody too much, although this song is all spoken word.

I was probably inspired by listening to an early LP by the Last Poets. They were the precursor to ALL rap and hip-hop. I put in congas and maracas with bongos, and an African wooden slit drum. It’s more like beatnik poetry than anything.

SKID: Again with the surf guitar? This has a nice Freddy King feel to it. I used a Fender Telecaster with an old small Airline amplifier, so it has a natural slight dirty distortion and punch. No surfy reverb on this one.

I love to play this song live, ‘cause it has a couple of fake endings, and people on the dance floor don’t know what to do. And then, when it finally ends for real, they keep dancing! It never fails!

SDR: When covering older songs by others, do you use a lot of vintage analog equipment?

SKID: This is the only cover tune on the whole CD. It is a song from the ‘60s, originally done by Claudine Clark. I wanted it to feel like New Orleans, so I played two snare drums rat-tat-tatting along through the whole song. Joyce Rooks sings a purdy duet with me here, with backup vocals by Jose Sinatra and gumbo sax provided by Johnny Viau.

SDR: This reminds me a bit of Country Dick and the Beat Farmers. Intentional?

SKID: Not intentional, believe me. But you might be a cult with one member, if that’s what you hear. Do you also hear surf guitar?

Ironically, I’ve never been drunk in my life.

TRACK 8: “The Return of Rodan”

SDR: You say in this song that you think Rodan is so much cooler than Godzilla. Tell us why?

SKID: When I was a kid, the Rodan movie was truly scary to me. It’s laughably corny now, but when you’re a child, you don’t see crappy scenery and a man in a lizard suit.

I recently found a video of The Crawling Eye, a scary old movie about aliens from another planet who land in the alps. It’s silly now, a giant eye with tentacles, menacing people from a cloud. I remember being terrified when I saw that movie as a kid on a Saturday afternoon at the Bay Theater in National City.

I love the nervy two-note guitar solo in this song, with atmospheric flute in the background.

SDR: This has kind of a Gary Puckett/Union Gap vibe.

SKID: Now it’s Gary Puckett, not surf guitar? I wrote this song a few days after meeting her years ago. I played and sang it to her over the phone. She didn’t believe that I wrote it for her, she thought I just stuck her name on someone else’s song. She ended up marrying my old drummer from the Whirlin’ Spurs and moving to Los Angeles.

SDR: What southern country rock bands or performers most influenced you, and in what way?

SKID: What drugs were you on when you listened to this one? Influences? Dan Hicks, PF Sloan, and Larry Storch [F Troop]. Maybe Dylan and Gomer Pyle.

SKID: Well, it does have a nice drunken trombone, provided by Steelbone Cook. I don’t mean that he was drunk when he did it, but I told him to ply like he was at a party.

I also came up with what I thought was a brilliant idea in the studio: Flip the tape over and record the trombone so it will end up backwards. As it turns out, backwards trombone sounds exactly like a regular trombone! Who-da thunk?

SDR: Having just put up a fence to keep my neighbor’s crazy killer dogs out of the yard, I’ve been humming this one all day.

SKID: I played a bunch of these songs for Buddy Blue a few years ago, and this was his favorite. I actually heard him singing it to himself when he didn’t know I was there.

SKID: I recorded the whole album at Hit Single in El Cajon, and they have a Hammond B2 there, so that’s what I used. I guess it’s one less as good as a B3. That’s a dumb musician joke…

Here’s an interesting story: I don’t really play piano or organ, but I wanted this song to have organ on it with a nice cheesy solo. I bought a crummy old Yamaha organ for five dollars at the swap meet, so I could figure out what notes sounded good for a solo.

I practiced along with my cassette for a week and got pretty good at it. When I came into the studio to record my big solo, Randy Fuele, the engineer, gave me the news that I was playing in the key of D sharp, and the song was in D. My cassette player had speeded it up by a half tone, and I learned my parts in the wrong key.

“Not to worry,” he said. “Since we’re using tape, I’ll just speed up the machine so the song will record in D sharp!” Hooray for old school technology!

6.
PARTY LIGHTS I see the lights, I see the party lights They're
red, blue and green Oh, everybody in the crowd is there But you wont let me
make the scene Mama dear, tell me, do you hear? They're partyin tonight I
tell you I can't sleep because across the street Woh oh, I see the party lights
Mama dear, looka here, looka here There goes Mary Lou I see Betty and Joe
and Tommy and Sue And there goes my girlfriend, too Hey, Mama dear, looka
here, looka here I'm feelin kinda blue They're doin the Fish, the Twist,
the Mashed Potato, too And I'm here lookin at you

9.
JENNIFER JOHNSON Two laughing blue eyes are pullin me in Girl,
now really you are under my skin I can't keep hiding away in my cave Cause
fortune should favor the brave I was afraid then of rollin the dice What's so
hard about breakin the ice? Honesty should be the name of the game And
Jennifer Johnson's her name Sha la la la........ Her lips were glistening, I
bent close listening To hear her every word The lights were dimming and the
band was swimming All the right ingredients were stirred Sha la la
la........ Her smoothe complexion was makin me think Goof that I am, I knocked over
her drink Right off the table and on to her dress And really makin a mess I
was worried that I'd blown everything Don't talk with your hands now, you
dumb dingaling Awfully sorry, I've gotta be daft Don't worry about it she
laughed Sha la la la........