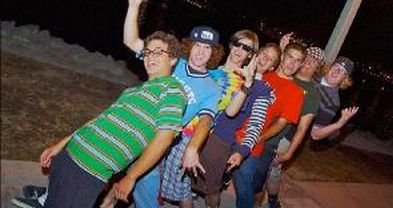 The Skank Agents began as a teenage ska band whose members were all in high school, most of them graduating around 2007. A debut album, Something for Everyone, was released in 2008.

Members have been known to masquerade as a heavy metal band called Neon Lightning Storm.

In 2010, the seven-piece group played the Vans Warped Tour date in San Diego.