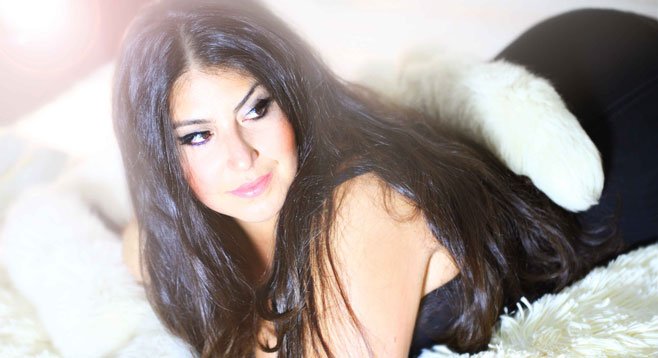 The daughter of a Lebanese father and a Mexican mother, native San Diegan Sacha Boutros attended the University of San Diego on an athletic and academic scholarship. "I played soccer growing up," she says. "I learned how from hall-of-famer Jean Willrich." She played soccer semiprofessionally for ten years.

Going pro wasn't in the cards, however -- singing jazz was. The December 2006 issue of Riviera magazine named her as one of the "hottest music artists to come out of San Diego." Boutros has performed at jazz festivals across the U.S. and in Mexico. "I learned to sing with my grandfather in church," she says.

Along the way, Boutros has learned to speak French, Italian, Spanish, English -- and a bit of Arabic, Portuguese, and Swiss-German. "I am always learning," she adds. "I am classically trained; yes, sir, I sing opera and have a four-octave range."

She served her most important local apprenticeship at the Red Fox Room. "My favorite place. More so when Shirley Allen was there -- she was amazing. She passed away. She taught me so much. I saw her three to five times a week for years. I went and sang there as much as I could with her; she had the most amazing musical style. People don't have that sound anymore or know that many songs. The place is great: old round tables, dark inside. It's a bar from the 16th Century that was brought over from England."

Boutros's CD Speak Low came out in September 2007. "It has jazz, Latin bossa nova, swing, and pop. It's in five languages [Spanish, English, French, Italian and Portuguese] and features Geoffrey Keezer, Red Holloway, and Chuchito Valdés, who I wrote a song with. Half of the album is original." Also on her album are locals Bob Magnusson and Mike Wofford (who once upon a time backed a singer named Sarah Vaughan), along with Peter Sprague.

In summer 2008, her album Simply Sacha - also featuring Magnusson, Wofford, and Sprague - was the top most-downloaded Latin-jazz release on emusic.com. Her early 2009 tour of Japan came about after she guested on an album by saxophonist Red Holloway, with whom the Japanese tour was booked and who appears on Simply Sacha.

She spent much of 2011 touring extensively from Bruxelles to Hawaii. In September of that year, she released her Sacha, Live in Hawaii album, recorded in front of a live audience on January 28 at the Waikiki Hawaii Public Radio Atherton Studio. Later that year, drummer Gerrick King passed away.

Her third full-length Sacha: NY After Dark was released in July 2013. A new single released in 2015, "A Love Song" (featuring Peter Sprague), was her first country recording, covering a tune made popular by Anne Murray in the 1970s.