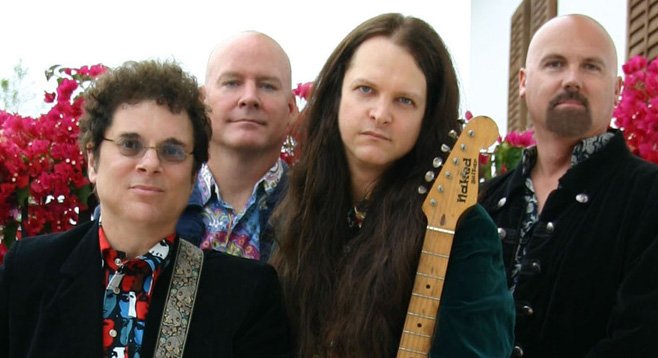 Vintage guitars, vintage clothing, and three decades of the greatest rock, pop, and soul ever written have earned Rockola eight San Diego Music awards. The band’s groovy repertoire is more comprehensive than a complete collection of Nuggets and Pebbles LPs. As dependable as a well-stocked jukebox, they’ve also been known to back up visiting icons like Badfinger’s Joey Molland.

Four-part harmonies are the order of the day, as they shift from the rough-and-tumble exuberance of the British Invasion to the West Coast sun sounds of the “California Dreamin’” scene. Add some Motown and soul, and a helping of plain old American rock and roll, and a splendid time is guaranteed for all.

Popular for their precise versions of the Beatles’ music, Rockola has recreated Rubber Soul, Revolver, the White Album, Sgt. Pepper, and Abbey Road with symphony orchestras in many venues around San Diego, including Spreckels Theatre and the Birch North Park Theater.

In 2008, Rockola introduced its newest program, the Magical Symphony Youth Orchestra, an orchestra comprising children and young adults learning to perform classic rock music with a live band. From that ensemble, trumpet player Jason Mandich (known for performing the difficult piccolo trumpet solo from the Beatles song “Penny Lane”) was twelve years old and attending school in Ramona when he joined Rockola as a permanent member later in 2008.

In late 2010, they landed a vintage track on the British Christmas album Power Chords, Harmonies and Mistletoe, from UK label Twist Records. The 2001 recording of “Just in Time For Christmas,” featuring Bob Tedde and Mark DeCerbo (Four Eyes), was originally released as a limited edition single.

In August 2011, 15 year-old trumpet player Jason Mandich, who sometimes sits in with Rockola, played with Chicago during their sold-out show at Humphrey’s. The Ramona High School sophomore also plays in several school bands.