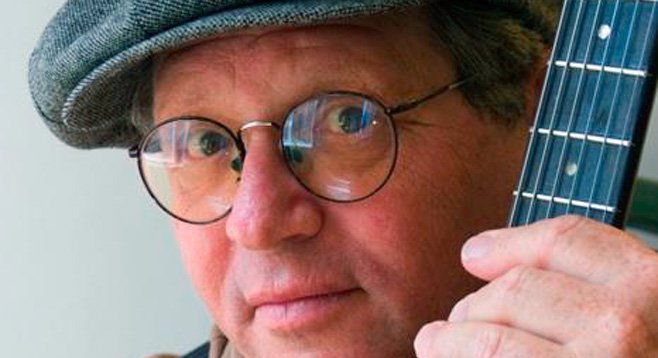 Robin Henkel hoots, hollers, walks out into the audience with his guitar, sits at their tables, and tells stories. He favors the raw end of what his instrument can sound like, and when he sings it comes out in an unexpected baritone.

“As a kid I listened to and played Josh White songs. Musically, he was like a father. Later, I thought Jimi Hendrix was the ultimate best, and although I do not really sound like him today, his phrasing and style made some core-level impact on me. Phrases that I learned when I took lessons from Peter Sprague in the late 1970s still pop out all over the place in my playing today. Last and most certainly, the influence of the country-blues guitarists — Robert Johnson, Mississippi Fred McDowell, and Lightnin’ Hopkins — has left a stamp on my style.”

Henkel is a self-styled blues man, a revisionist, and an expert in performing the country music of the Delta. As such, he makes both bottleneck slide and lap steel guitar look easy. Favoring the use of severely dated axes that look to be on their last leg, Henkel plucks solos from them like a man taking aim with a bow and arrow. It’s the high tension he keeps on the action of the strings, he explained once, that is partly responsible for his distinctive sound.

A two-time San Diego Music Award recipient (as of 2010, anyway), Henkel has for a number of years looked upon the acoustic music of the Mississippi Delta of the 1930s and ’40s as his muse. He is also a student of country swing, funk, fusion, bop, and Americana.

That’s where his side project for the past couple of decades comes in, a dual sax with trumpet-guitar-bass-and-drums horn band known as Robin Henkel with Horns. Henkel also plays dobro, mandolin, and guitar for the 7th Day Buskers, as well as performing occasionally as a solo act. He sings several tracks on his 2007 self-released solo album, Awesome Possum.

“Well, it's confirmed, with flights and performance itinerary booked, that Ric Lee and I will be traveling to England in June to perform together and with DaMama Tokus,” reported Henkel in early 2014. “After dragging my feet for years over traveling to perform out of town dates, Ric and Mama have made this a reality.”

Henkel and his travel companion, Bayou Brothers drummer Ric Lee, played a week of UK club dates culminating in a slot on the Barbican International Jazz and Blues festival. Then, in October 2014, Henkel was named Best Blues at the San Diego Music Awards.

2016 saw the release of Then & Now: Compilation 1988-2016. "It's not blues, either," he says. "Behind closed doors, I've been tinkering away with synthesizers, computers, tape machines, drum machines, funk bass, chicken scratch guitar, plus jazz composing and arrangement. This release represents thirty years of obsessive creative activity, and most of it is previously unreleased. Techno, urban, electronic, funk, I don't know what you're supposed to call stuff these days."