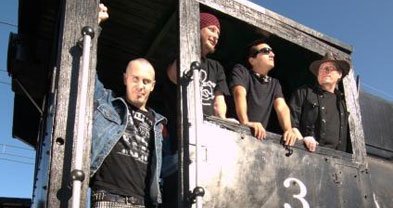 Sound description: Country punk designed to scare the cows and kick the skinheads, with Elvis and Johnny Cash having sex while Patsy Cline watches.

“About a year ago, I decided I wanted to form a country band,” says Tim Raldo, best known for his confrontational and scatological stage antics fronting the punk band the Filthy Fuks.

“The Ramblin’ Outlaws are trying to bridge the gap between Hank Williams and G.G. Allin,” says the 27-year-old Raldo, whose story of the band’s origin would seem well suited for either punk OR country. “I went to my friend Rowland Bluntz’s house to hang out and smoke pot, but then he went to jail after a drunken fight with his girlfriend attracted the attention of the Santee sheriff's. He got released from jail after serving about two and a half months, and we wrote our first song together that night, ‘Kiss My Baby With My Fist.’”

The band’s debut album, Devil’s Railroad, will be released over the next few weeks. “We did a photo shoot for the cover at an old train in La Mesa,” says Raldo. “The idea of a photo shoot always seemed kinda lame to me, but we got stoned as fuck beforehand and you can really tell by looking at the pictures. All in all, it was a good time.”

Not all times are good, though. “The bad shows we played were at Thorton’s Irish Pub in El Cajon; fuck the stupid micks! And we did one show at the Beauty Bar; fuck that place, too.”

So, even in cowboy boots pointy enough to play soccer with a BB, rest assured that Raldo and friends will be keeping it punk. “We look forward to pissin’ and pukin’ all up and down this one-time great country!

“If you’re a fan of anything from Hank to Johnny to G.G. Allin, the Ramblin' Outlaws are the group for you.” The band’s debut album, Devil’s Railroad, was released in late 2009.