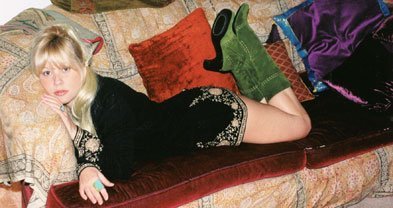 Rachael Gordon’s sound, style, and her very life play like something out of the late ’70s. Musically, she says, “I’m into all sorts of things. There’s some garage rock, some power pop, and some folk. I grew up in the ’70s, so there’s all those influences from AM radio.”

Since having had a moderate hit record in Germany and coverage in the German Rolling Stone mag, Gordon has been mining that groovy decade for girl-group gold. “I started doing shows with a group called the Sleazybeats,” she says. “We played covers and originals, and we did a birthday song to Phil Spector on a tribute album.” That track, "Phil Spector's Birthday," was co-written by Gordon's local Sleazybeats bandmate Sandra Castillo (who also shot the photos on many of Gordon's records) and produced by San Diegan Gar Wood (Hot Snakes, Night Marchers).

“I’m known as a pop singer, and my first records were very bubblegum, with a ’60s and late-’70s sound. I guess I could describe those as a mixture of the Peanut Butter Conspiracy and Blondie, though I kind of went into more of a country pop thing, much like Buckingham Nicks or early Linda Ronstadt...seventies music had a big impact on me, especially stuff like Heart, which can go from acoustic to Zeppelin in no time. The Runaways were a great one, and Joan Jett’s solo stuff. AJ Croce is my brother-in-law, so definitely him, and my dad was a musician too. He played with a few San Diego bands in the ’60s and ’70s.” Her dad's local '70s groups included O.D. Corral and the David Bradley Band.

Gordon released a vinyl EP on the Spanish Snap! Label and appeared on a few compilation albums before Sounds of Subterrania released her debut album, produced by San Diego's Richard "Blitz" Livoni of Comanche Moon, who has also written music for her. Her other songwriters have included the aforementioned AJ Croce, as well as Frank Barajas of JuJu Eyeball. Gordon's sophomore album was released in Japan, collecting all of her pre-debut album recordings along with three new tracks. She has also recorded tracks with classic-rock survivors Foreigner.

Gordon has been backed by a rotating roster of notable locals, including Bart Mendoza (the Shambles), Hector Penalosa (the Zeros), Joel Kmak (the Beat Farmers), Mike Kamoo (Static Halo), Ray Brandes (the Tell-Tale Hearts), and Ron Silva (the Hitmakers).

Despite the all-star accompaniment, she says gender can still be a problem with promoters. “It’s very hard to get someone to stop looking at your ass and listen to what you’re saying…believe it or not, it’s still considered pretty wild to be a girl fronting a rock band. Occasionally you’ll see a girl fronting a punk band, but that doesn’t count.”

Asked about her worst gig, Rachael says, “It wasn’t great being called a ‘Nancy Sinatra wannabe’ in a San Diego Union-Tribune review — I think the worst was when I was forced to sing the Mary Tyler Moore theme at a coffeehouse.” Alas, when you’re living out an episode of That ’70s Show, that’s the kind of kneesock nostalgia people are going to expect.

She's maintained a low musical profile since the turn of the 20th century, although she did appear at San Diego Poptopia in 2000 with Jason Falkner, Beachwood Sparks, and others. For awhile, she was doing duo shows around town with partners like Bart Mendoza and Ron Silva, as well as occasional full band performances. "It depends on who's in my backing band. I've played Java Joe's and the Casbah and the Adams Avenue Street Fair. I also did the KUSI morning show, and a bunch of shows in LA."

In 2013, it was reported that Gordon was living in north San Diego with former Kiss guitarist Ace Frehley, for whom she wrote lyrics for his 2014 solo album Space Invader. They later married.