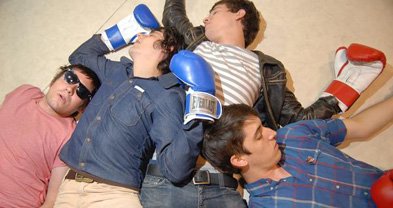 Before they ever played a show, the Prayers received offers of sex and death threats via MySpace. But because three members of the new pop/rock outfit were in the Plot to Blow Up the Eiffel Tower, sex and violence were expected.

The Prayers emerged after Welchez met Andrew Miller (formerly of Gasoline Please) and "formed mutual man-crushes on each other," says Welchez. The two searched San Diego for a rhythm section before borrowing Plot bassist Willy Graves and drummer Brian Hill. The Prayers made their live debut January 17, 2006 at the Casbah. Miller and Welchez left the band in early 2008.

As of late March 2008, it appears the Prayers have split. Willy Graves passed away in September '08.