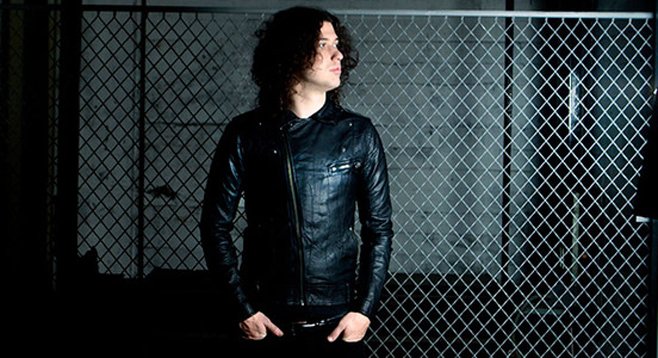 Before becoming known for playing with NIN, Angels & Airwaves, Paramore, Beck, and M83, Ilan Rubin started his music career while still in grade school, picking up the drums at age eight and, in quick succession, mastering the guitar, bass, and piano. “When I was a lot younger, I had been advised by older musicians to get out of music altogether. Encouraging! But I’d have to say the sentiment that rings loudly with me is that if you truly believe in what you’re doing — and I don’t mean ignorantly and stupidly thinking you’re great — stick to your guns and see it through. My parents always told me to pursue what I do, always work on getting better, and to always be smart, since the industry is notoriously unstable.”

He was 11 when he performed at Woodstock 1999 with the local band Freak of Nature (aka FoN). Alongside his brothers Aaron (guitar) and Danny (bass), FoN. also appeared on several Vans Warped tours, and Modern Drummer magazine declared him “Best Undiscovered Drummer Under the Age of 18” in 1999.

Hitting the concert trail with NIN only made Rubin more aware of his OCD tendencies. “Before going on tour, I do have a bag of medicine for practically every illness. I’m paranoid of getting sick on tour.”

“One of the first shows the New Regime played was at House of Blues, but was moved from the main stage to the small stage upstairs. Suffice to say there were way too many people in that room. Loading in and setting up was a mess, which lead to gear not working. I don’t think our bass player at the time played for half the set, which was 25 minutes long.”

In summer 2011, the New Regime released a 24 minute documentary on the making of Speak Through the White Noise, chronicling Rubin's journey through Lostprophets and Nine Inch Nails, while recording the album in studios, garages, and hotel rooms around the world. The band spent the rest of the summer touring with Taking Back Sunday, Thursday, and the Colour Revolt.

In late 2011, Rubin was announced as the new drummer for Angels and Airwaves, fronted by Tom DeLonge of Blink 182. The following year, he rejoined NIN and played on the self-titled debut Paramore album. Early 2013 saw the release of a new eight-song New Regime EP, Exhibit A, the first in a series of related releases.

“When it came time for a third release, I had enough material for almost two full-lengths,” says Rubin. “But, unlike my first two albums, these songs weren’t written with a definitive vision in mind. I realized that this broader spectrum of ideas was an exciting thing. I could release the music as a series of EPs. I call them ‘exhibits,’ a collection that I can and will constantly be adding to.”

Everything on the self-released digital EP was written, performed, sung, and coproduced by the 24-year-old, alongside engineer and mixer Aaron Rubin. Though it wasn’t supported with a tour, Rubin released a video for the featured track “Daydream.”

Mixing industrial electronica with more traditional power-trio song structures, Rubin says, “I wanted to continue to push my songwriting in multiple directions, while keeping songs direct and concise.... I always like to keep music moving in various directions and have the listener guessing what’s next. Sonically, the material on Exhibit A lent itself to both very organic sounds as well as quite a bit of electronics.”

It’s an accurate enough self-assessment, though it’s not always easy to draw parallel lines directly to the almost-arena-sized anthemic rock heard on his earlier Regime releases, Coup and Speak Through the White Noise. “The New Regime has many musical sides,” notes Rubin. “While the tone of the music may be on the darker side of things, it has its moments of mellow, heavy, up-tempo, pop in a more traditional sense, guitar-based rock, and classically influenced piano-driven songs.”

Rubin's skillful hands have other handy uses, he says. “I can cook some pretty delicious eggs. I do that thing where you put a little bit of water in the pan while the eggs are cooking, and then place the lid on so the yolk cooks enough without having to risk the flip. However, my flipping skills are pretty damn good, and I make a pretty mean eggy in a basket. The trick there is to use bread slices that are big enough to press out a good sized hole with a glass, without compromising its structural integrity.”

After embarking on a late 2015 North American tour with Gang Of Four, Rubin unveiled a New Regime video for their tune "We Rise, We Fall."

Autumn 2019 found the band opening shows on the Angels & Airwaves tour, including San Diego's HOB on October 5 and 6. "I'll be playing new material from the New Regime's first release on Red Music, and Angels will be performing for the first time in seven years with new material as well," he said at the time.

Their new EP Heart, part one of a four part EP series called Heart, Mind, Body, & Soul, was released in October 2019, followed November 22 by part two, Mind, with videos produced for "A Way To Feel Again" and "Turning a Blind Eye," both directed by John David Moffat (the latter is a performance video filmed while touring with Angels & Airwaves the previous September and early October). A single for "Do Right By Me" dropped in late November.

Mind, the second installment of Heart Mind Body & Soul was preceded by a single and video (directed by John David Moffat) for "It's Gonna Be OK." Part three, Body, came in January 2020 with another Moffat-directed video and a single for "Struggle In My Bones," along with the announcement of a tour with Silversun Pickups.