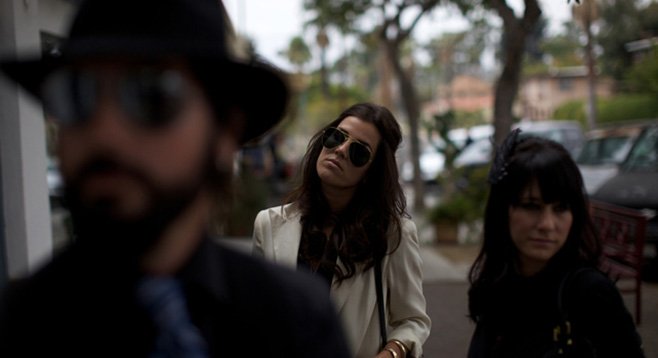 Brian Karscig (“I have the same birthday as Beethoven”) decided at a young age that he wasn’t cut out for the nine-to-five world. “I worked at a really nice French restaurant when I was seventeen, and I asked for my eighteenth birthday off, two weeks in advance. I remember coming in to look at the schedule two days before my birthday, and I was scheduled. I confronted my French a-hole of a boss about it…he said ‘if you don’t show up to work, don’t ever come back.’ That was the last day I saw him.”

After a successful run with Louis XIV, Karscig co-founded the Nervous Wreckords in 2009 with keyboardist/guitarist Anthony Saffery, producer and member of U.K. band Cornershop.

“I’ve always been a fan of Cornershop,” says Karscig, “and have seen Anthony playing sitar with Noel Gallagher on a Beatles tribute performance on the BBC and loved the 'Brimful of Asha' song and video...we started chatting and really hit it off. We kept in touch via email and phone and would regularly send each other mixes from bands we were in the studio working with. I really appreciated what Anthony was bringing to the production of these songs.

“Soon after, I sent him some solo stuff I had been working on in between writing for a new Louis XIV album; he loved it! We decided to start working on some tracks together by sending hard drives of files across the country and working out of our own studios, respectively.”

The Nervous Wreckords started out as a production company Karscig had while working with other artists as a producer. “As my own music started to take precedence over producing, and a band was starting to form, I figured let’s just put a ‘the’ in front of a company name that encompasses everything creative and all of the nervous wrecks, myself included, who are involved in the music.”

Many were surprised at the sudden breakup of Louis XIV, who garnered innumerable articles and toured the world. “Taking a step away from a band I’ve been in to do something new, when you’ve been working with the same group of friends for a long time, is a pretty scary thing to do. Mix in some debt collectors, relationships, and people and pets close to me passing. When you’re used to a life of certain people and amenities close to you, then they’re gone, it’s easy to get inside your head, crawl into a corner, and stress out.”

“You can’t let yourself put limits on creativity, nor the hunt to find something new expressively. As a songwriter, I always chase that high I had when I was 13 and wrote my first completed song. As a band, I think it’s important to constantly chase that carrot, no matter how far or fortunate any of us have been in our careers thus far. Once you stop chasing the carrot, it’s too easy to sit around, get lazy, and take your time eating it.”

Their 1960s-style logo was designed by Jimmy Ovedia and John Hofstetter, originally intended for use in relation to Karscig's production company.

In November 2009, the band completed a regional U.S. tour opening for the Killers and then appeared at the CMJ music showcase in NYC, playing 35- to 40-minute sets at both. “Our very first thirteen shows were opening for the Killers. I think our best local gig was at Cox Arena opening for them. We went on right before the Killers the whole tour, so the crowds were pretty amazing. Worst gig: Las Vegas. It was the first time and last time I will do that many shots before a show. In fact, I don’t think I’ve done a shot of alcohol since that show.”

In 2010, the band shot a video for “Coming to an End” off their debut full-length Valuminium. “We spent a few days with Mike Hindert (of The Bravery fame and The Danvilles awesomeness) and Russell Schaefer (short film and documentary genius) and shot what we think is our coolest video yet.”

In early 2011, Brian Karscig co-produced an album with new group Subsurfer, about which he says “Great band I just finished working with...they’re pretty awesome!” A “Making Of the Album” video is on YouTube (search Subsurfer).

As of summer 2011, the band included Karscig, keyboardist Daniel Schraer, guitarist Lindsay Matheson, and bassist Cindy Cate. Matheson’s grandfather was one of the original surfers in San Diego; the surf spot Ralph’s is named after him. Says Karscig, “The other two members, keys and drums, have changed hands five times so far since we’ve been a band, so we usually fill in the gaps with different talented friends to complete the live shows.”

They joined Wavves and Weezer for the Weezer Cruise when it sailed January 19 through 23, 2012 on the Carnival Destiny ship from Miami to Cozumel. Later that year, they released their sophomore full-length Let Them All Talk, featuring a cover photo of a transsexual, barefoot and wearing lingerie.

“I’ve always wanted to put a transsexual on the cover of one of my albums,” confesses Karscig. “It was an interesting casting call, looking for transsexuals who would be into what we were doing. We lucked out with Amanda, who truly is and lives life as a woman, but who was born a man.”

Does San Diego lack quality trannys? “We got a bunch of freaky John Smiths who were businessmen by day and would dress up as a woman by night. They were not what we were looking for.” He says he found himself relating to Amanda, who posed barefoot in lingerie for the cover photo. “I’ve always been mistaken for a female when I sing. It was a bit hard to accept at first, but then I just started embracing it. My good friend Amanda must feel the same way in life, the way she feels like a woman trapped in a man’s body.”

Being DIY, the new cover finally fulfills Karscig’s longtime tranny dream. “I was shot down by my last record company in my last band. It’s one of the perks of being a self-made, self-financed, independent band, I guess.”

Lindsay Matheson (aka Lindsay Lee) left the band to co-found Flaggs in 2013, alongside bassist Leslie Schulze (formerly of the now-defunct New Kinetics), and drummer M. Franco. They made their concert debut on July 13, 2013, at the Casbah, where they released a self-titled EP. Matheson/Lee then cofounded the all-female Locker Room Talk in 2016, alongside Saba, Celeste “CC” Spina (Little Hurricane), and Jessica Maros (Escondido).

Louis XIV guitarist Brian Karscig joined the Killers onstage for the Louis tune "Finding Out True Love Is Blind" at North Park Observatory on September 19, 2015. That November, the Nervous Wreckord (Part I) EP was released.