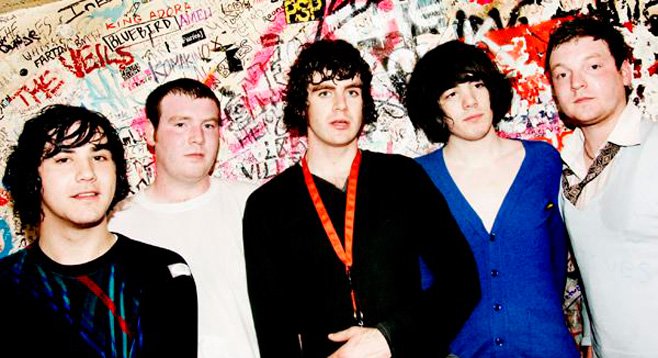 The Natives believe in San Diego. “The potential in this city, that’s the influence, man,” says singer Tony Fantano, who gave a shout-out to the Kumeyaay natives at a recent Whistle Stop gig. “I love this area. It feels good to represent where you’re from. I want people to believe there is hope for the San Diego music scene. I want people to feel, like, Hell yeah!”

They’ve been playing their own brand of energetic, danceable, tongue-in-cheek shock punk since 2003.

“You gotta take the seriousness out of the situation,” says Tony, whose giant blonde afro and muttonchops testify to his blithe outlook. “It’s bumpin’ uglies, man!”

“I printed all these fliers and took them to school,” Tony says. “We had four bands and maybe 80 kids came out. It was phat! People were skating, lighting fires, someone got a tongue-piercing. It was going nuts. But what happened was, the first band played, the second band played, and the cops came. So, we realized we had to play first next time. We called it the ‘No Dough No Po Show’ because the cops kept showing up.”

The band took a hiatus when Tony split for college in San Francisco but has since been playing regularly at venues all over town, including Pure Platinum.

“It’s kind of awkward, you know?” says Sebastian Lopez, bassist since 2008. “Because you’re in this strip club and the strippers are always asking you for money.”

Inspired by show houses in San Francisco, the Natives hope to start their own home venue in the future.