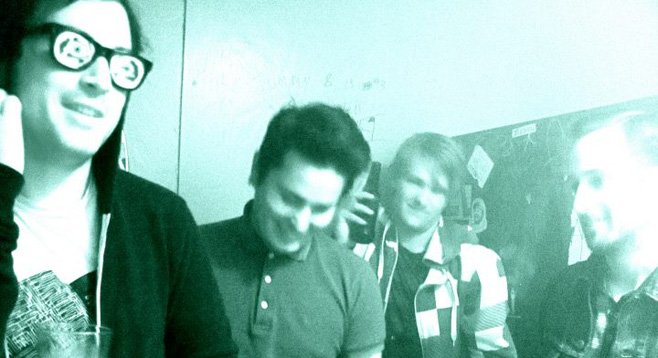 Sound description: Ghostly harmonies that slither and shimmer together with weirdly beautiful hooks, souped-up surf sounds, and a solid wall of reverb.

Their two-song seven inch There Is No God was released in October 2010. “I started a record label this year called Thrill Me! Records, and this is the first release on it,” said Turnbloom at the time. “The cover art is a picture I found of a flood survivor from the 1930s. Like our name, the picture is odd and ambiguous, and I like simple images as opposed to something crazy that’s hard to focus on.”

“We have all been touring in different bands for years. I can only speak for myself, but I remember playing on a cruise ship one time in First Wave Hello, that was pretty horrible. I’ve played the Double Door in chicago twice, it was incredible both times. The Casbah show with Ken Andrews in 2007 was the most fun I’ve ever had playing a show. I also played a show in Sacramento when I was touring in Blessure Grave, and that was pretty insane, with people running into the drums and everyone was falling over in this tiny punk venue. Pretty fun!”

Pity Party Animal was released in late 2010 and a second seven-inch single dropped in March 2011, while Cory Stier was booking bands for a new all-age North Park venue, the Irenic, operated by the Missiongathering Church. They released a split 7-inch single in November 2011 with the Frights, "Prescription Vision" b/w "I Know What Girls Like", with 500 copies released on the Grizzly Records label.

In early 2012, they released a full-length, Strange Heaven, produced by John Reis (Hot Snakes, Rocket From the Crypt) for his Swami Records label. The digital edition was released in March, followed by the physical CD in April. Their spring tour with Cults featured Cory Stier drumming for both bands, and they also toured with the reunited Hot Snakes that summer.

Around the same time, “Fools Paradise,” their fourth 7-inch in a year-and-a-half, was released as a picture disc in a limited run of 300 copies, via independent UK label Enjoyment Record.

A sophomore Mrs. Magician album called B-Sides was released in September 2013 on the Thrill Me Records label. However, shortly before a December 27 set at Soda Bar in City Heights, the band said they planned to split. By August 2014, they were back on stage, playing opening slots around town for the Sonics and the Zombies.

The next Mrs. Magician album, produced by Reis and entitled Bermuda, was released in May 2016, preceded in February by its lead single "Forgiveness" and then a single for "No Action." 

"Bermuda has a boozy island malaise on the surface of the water, while beneath the waves we're exposed to themes of confusion, nihilism, and the notion that even with all of our technology and omnipresence of big brother," says Turnbloom. "Essentially, we are all still very lost."

A video was produced for the track "Eyes All Over Town." December 2016 found the band releasing a new single, "You'll Fall In Love" b/w "Spiritual Awakening," with a vinyl edition of 100 Doublemint, 200 Coke bottle green, and 200 black vinyl discs.