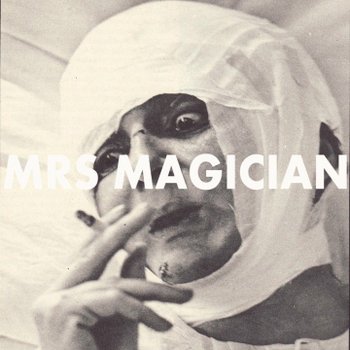 There Is No God

Thomas Garcia produced the record at House of Plenty Studios.

TGIF Review, by John Brizzolara
I’ve never heard Mrs. Magician, though I’ll bite as to why-the-name? But I glimpsed their (seven-inch) record cover of someone smoking a cigarette through facial bandages and immediately flashed on the name of the recording: “There Is No God.”

The record’s name did, indeed, seem to be — and in the most ironic way — a God thing. That is, I’ve been issued 30-some pages of homework from the program I’m in. My homework is on the second of the famous 12 steps used for everything from chemical dependence recovery to gambling, overeating, and sex. Step Two is: “Came to believe that a power greater than ourselves could restore us to sanity.” Several pages are given over to interview five friends, neighbors, or kids on your block as to how they came to believe such a thing. One hopes one doesn’t encounter a series of atheists because that is what “power greater than ourselves” is: secret, sneaky code for — God.

To see a rock single (I guess) titled in such a way seemed momentarily significant, though it was unclear exactly how. “The cover art,” a band member is quoted online, “is a picture I found of a flood survivor from the 1930s. Like our name, the picture is odd and ambiguous, and I like simple images as opposed to something crazy that’s hard to focus on.” The band’s name and the photo may be ambiguous, but there is nothing ambiguous about that title.

On the heels of awareness that I have yet to do any paperwork on Step Two, I was put in mind of a couple of other things: the coincidence of Mrs. Magician’s song title and my unaddressed assignment and a New Yorker cartoon I saw a few years ago. Two monks are walking through an abbey or monastery of some sort. One says to the other, “That is so God.” Maybe you had to be there. Maybe not. The other thing I thought of was a gig I played years ago with José Sinatra and the Troy Dante Inferno, not only at the Museum of Contemporary Art in La Jolla but as an exhibit in that museum — an installation piece, supposedly, called “Performance Anxiety,” in which we played and actually recorded behind Plexiglas, as if we were in a zoo, while museum patrons filed past, smiling at us like we were Animatronic Piltdown men.

Anyway, back to Step Two and my being somewhat whelmed before I begin. Possibly, you could help me here, especially those reading this online. Would you mind terribly — say, if you ever did come to believe that a power greater than yourself could restore you to sanity — stating how that came about, how it’s working out for you these days, and maybe even what the nature of the insanity might have been? That last bit isn’t strictly necessary, though it might make for lively reading. Meanwhile, you may feel free to have fun at my expense on the comments page beneath the column, stating how many times you’ve seen me around town passed out in some hedges or puking on my shoes. Go on, have fun, log on — come on down and join the gang! In return, I promise not to come sucking around, apologizing to you for something or other when I get to Step Nine and have to make amends and embarrass the crap out of everybody. Deal?

Meanwhile, I must get a copy of that record. Guess I’ll try M-Theory. Possibly I can transcribe the lyrics onto my Step Two worksheet. Even if unhelpful in that particular area, I’m still grateful to Mrs. Magician for such a thought-provoking moment. By the way, Woody Allen has a title for your next record, the sequel to “There Is No God.” That would be, “Not Only That, But Try to Get a Plumber on Sunday.”