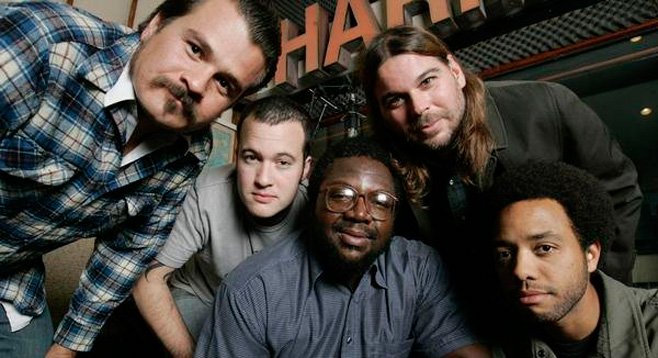 Mr. Tube & the Flying Objects play Mexican funk along the lines of War (“Low Rider,” “Spill the Wine”). Like War, their sound is a little beery and maybe high on marijuana or 'shrooms.

The band has described their music as “lowrider, Latin dub music,” but that doesn’t do justice to how mysterious it is. Trumpet and sax drift in and out of bass-heavy rhythms, while a distant voice sings things like “Jesus was king of the vatos.” A fuzztone guitar will play a nasty lick while a pretty keyboard trills along and the whole band shouts, “They want your money!”

Led by singer/guitarist Pall Jenkins, they specialize in soundtrack-y songs that sound vaguely like they written between 1968 and 1979, but performed by contemporary eccentrics. “These sounds carry on through the generations creating new astral planes like galactic poison floating in between the 68 planets,” says their MySpace profile. “Undiscovered, undisturbed, undenied, unattainable, unheard, and now unveiled.”