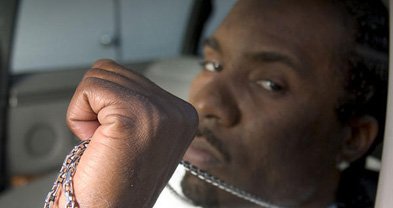 “San Diego isn’t all swimsuits, sunburns, and palm trees,” according to BallerStatus.net, based in Simi Valley. “It’s also Dickies suits, burners [handguns], and pounds of trees [marijuana]. That’s the ‘Daygo’ the city doesn’t want you to hear about, that gets swept under the rug, and that’s exactly what Mitchy Slick is rapping about.”

According to Slick, “San Diego look[s] real pretty, on the outside. But where I’m from, San Diego is really on some Blood and Crip shit. It's really got this shit going on. I don’t glorify it; I put it to the forefront because we really get done bad in San Diego. I want you to be aware of what's going on because I know my folks down there are struggling. We don’t have a lot of opportunities being black people. It’s [the city is] dominated by business and the tourism type of shit, and you don’t hear a lot of shit going down in San Diego 'cause they don’t want it to distract the money flow down there. But we’re nowhere near that.”

Mitchy Slick’s album Urban Survival Syndrome was released in September 2006. “I did this shit all by myself,” he brags. “I’m talking about every aspect, from picking the producers to sequencing the album.”

As a cofounding, SD-repping member of SoCal ensemble Strong Arm Steady, he’s on one of 2010’s most acclaimed hip-hop albums, In Search of Stoney Jackson. It rocked a 7.1 from the Pitchfork kids; All Music Guide admired how its “tracks shift from old-school funk to weird hiss-and-pop interludes with incomprehensible vocal snippets on top to collages.... From a purely instrumental standpoint, this album is the equal of the Beastie Boys’ Paul’s Boutique.”

Slick did not win “Best of” in his category at the 2010 San Diego Music Awards, despite a spirited write-in campaign launched by SDRaps.com. But at least considerable debate was generated concerning Slick’s absence from the ballot.

However, the most fascinating, scarifying, informative, colorful, and somewhat hilarious SD hip-hop–related document of 2010 got no SD press or local mention outside of SD hip-hop’s inner circles: the SD-set, substantially 619 hip-hop soundtracked the “Vendetta of Blood” episode of History Channel’s Gangland television series, which has aired repeatedly since its mid-May debut.

Complete with slightly overdramatic narration and given to mid-sentence punctuation by gunfire (pause: bang-bang-bang), it explores the long history and brazen activities of Southeast San Diego’s Lincoln Park Bloods. And its recurring focus is Mitchy Slick, as a veteran gang member and established music artist.

Slick, often serving as a guide throughout the episode (even contributing music to the soundtrack), was incensed with the sensationalistic show that finally aired. He disowned his participation within hours of its premiere, tweeting “IM SORRY TO ALL MY FRIENDS AND FAMILY FOR ALLOWING THESE PEOPLE TO TRICK ME.... IT WAS SUPPOSED TO B ABOUT CHANGIN FROM GANG SHIT TO MAKIN REAL BUISINESS MOVES!... THEY SAID IT WAS GONE B ABOUT RAP AND GANGLIFE...NOT ALL THIS SHIT ABOUT KILLIN POLICE!” (All spelling errors, faulty punctuation, and ill-mannered all-caps text presented here intact)

The Lincoln Park Bloods are famously dangerous but also have a rep “for throwing SD’s best parties”; disguised senior LPB member “Big Red” discusses “renting out beaches, having skis and boats, and having pretty feet parties: you got the prettiest feet, you might get a hundred bucks, babe. And that’s how we get down.”

Slick spent much of 2012 on tour, working on a collaborative full-length called Feet Match the Paint with producer DJ Fresh, and recording a new solo album (Won’t Stop Bein’ a Blood) as well as working on new tracks with Strong Arm Steady.

A 2012 compilation mixtape, Wrongkind Is Everywhere, Vol. 1, includes samples from his various 2012 projects and tracks by performers like Oso Ocean and 2Die4.

Slick - aka Charles Mitchell - was arrested in Marin County on Tuesday and booked on suspicion of human trafficking, kidnapping, criminal threats, exhibiting a firearm, and participating in a criminal street gang, with bail set at 1.5 million. Police allege that he transported a woman from Southern California and held her captive in a Sleepy Hollow home, where a search warrant was executed last week. Slick turned himself in on Tuesday. No details about the alleged victim have been released yet.